‘They said their objective is to make sure people are treated fairly,’ council head says. 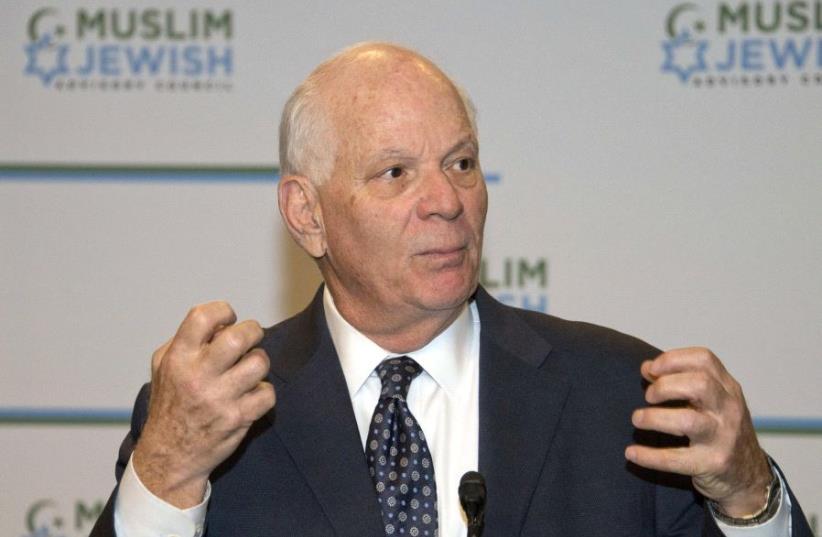 Democratic Senator Ben Cardin of Maryland
(photo credit: RONALD SACHS)
Advertisement
WASHINGTON – A new coalition of Muslim and Jewish leaders met on Wednesday in Washington to lobby government officials together “on issues of common concern” – a trip planned long before an executive order from US President Donald Trump targeting refugees and immigrants riled both communities.The group, formed in November as the Muslim Jewish Advisory Council, convened its 36 members for a day of meetings with members of Congress and senior administration officials. Their top priority was spotlighting an increase in hate crimes nationwide against Muslims and Jews.But their conversation with members of the Trump administration took a different direction than they had originally anticipated: members found themselves seeking reassurances that new leadership at the Justice Department was committed to longstanding practices combating religious and ethnic discrimination.“It went very well,” Farooq Kathwari, president and CEO of Ethan Allen and co-chairman of the council, told The Jerusalem Post. “They said that their objective is to make sure people are treated fairly, and that they wouldn’t do anything based on religion. So it was promising.”In an open letter to Congress, the council declared opposition to “any ban on refugee or other immigration to the United States based on religion,” specifically referring to the president’s January 27 executive order. The White House insists that the order does not amount to a Muslim ban, although its most fervent supporters and critics alike believe the measure is motivated by the president’s expressed desire to keep foreign- born Muslims out of the homeland.The project has attracted esteemed figures from the Jewish community, including David Harris of the American Jewish Committee, former ambassador Stuart Eizenstat, Temple Emanu-El Rabbi Joshua Davidson and the Rabbinical Assembly’s Julie Schonfeld, Rep. Steve Israel and former senators Joe Lieberman and Norm Coleman.“We’ve been discussing this for many, many months – challenges faced by both the Jewish and the Muslim communities in terms of hate crimes that are only increasing,” Kathwari said. “So we have to keep that in mind.And we also felt that it was time to get the message across that we actually can work together.“It just so happens that now, of course, the environment is such that this kind of discussion is all the more important,” Kathwari added.In the evening, a reception was held in the Senate with the support of Republican Sen. Orrin Hatch of Utah and Democratic Sen. Ben Cardin of Maryland. Several sitting congressmen, former senators and diplomats were in attendance.“During World War II, it was the St. Louis that had Jewish families trying to escape Nazi Germany that arrived at our borders, not allowed to enter,” Cardin said at the “particularly timely” event.“It’s particularly disturbing that today we are saying that there’s a different test for a Muslim coming to America.That sends chilling signals for what this nation stands for.“So we need to work together to reserve the values of America,” Cardin added.“The Jewish community, the Muslim community – we have a lot in common. And we are both here in America to build a better nation, and a stronger nation.”