The Pinocchio was designed by Artists 4 Israel to “draw attention to the lies of Israel Apartheid Week.” 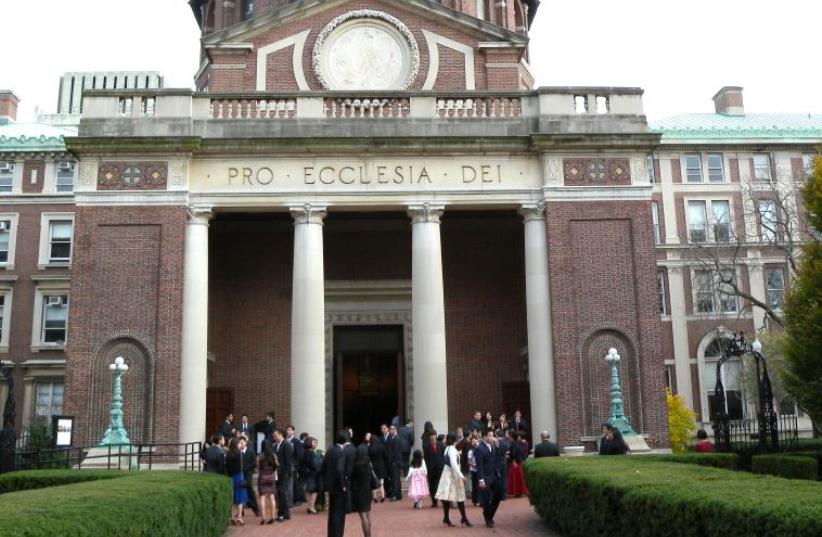 Looking east at St Paul's Chapel of Columbia U
(photo credit: JIM HENDERSON/WIKIMEDIA COMMONS)
Advertisement
NEW YORK – An inflatable 15-foottall Pinocchio doll placed by pro-Israel groups in front of a mock replica of the country’s security barrier displayed by the group Students for Justice in Palestine sparked major controversy during the annual Israel Apartheid Week at Columbia University last week.The Pinocchio, which was designed by Artists 4 Israel to “draw attention to the lies of Israel Apartheid Week” and displayed by the organizations Students Supporting Israel and StandWithUs, was removed from College Walk on campus after just a few days. SSI's display also included posters and literature provided by StandWithUs.The reasons for the removal, however, remain unclear and sparked a debate at the university.According to Columbia University administrators, some students complained that the cartoon character is “offensive” because Pinocchio’s long nose could be considered anti-Semitic.But SSI has a different explanation, claiming that even though they received approval for a “large display” from the Columbia student government, which regulates displays and demonstrations on campus, pro-Palestinian groups pressured the body into silencing pro-Israel voices. This, SSI said, is because the student government is led by pro-Palestinian students.“We believe in showcasing the truth on the ground within its accurate context, followed with strong efforts in promoting coexistence,” Rudy Rochman, president of Columbia’s SSI chapter, said in a statement. “We also feel it is necessary to stand up to the lies being portrayed as truths.”However, Daniella Greenbaum, a Columbia University student and president of the pro-Israel group Aryeh on campus, told The Jerusalem Post that while her organization had nothing to do with putting up Pinocchio, “the story that it was taken down for anti-Semitic purposes or that Jewish voices on campus are being silenced is a highly sensationalized one.”The real reason the inflatable doll was taken down, she said, is bureaucracy, not bias, explaining that SSI is not yet officially recognized as a student group at Columbia and, therefore, any booking of space the organization receives is “a gift from the student governing board.”She told the Post that SSI simply had not filled out the right paperwork to book the space for the Pinocchio display, which then had to be removed.“I do not condone the casual usage of the words ‘anti-Semitism,’ ‘oppression’ or ‘silencing,’” she said.Another Jewish student at the university, who asked not to be named, told the Post “hundreds of Jewish students were mortified that the response to Pinocchio being taken down was framed as an anti-Semitic gesture.”“The thought going around is that SJP [Students for Justice in Palestine] pulled that exact stunt two years ago when their banner was taken down,” the student explained. “They blamed it on bias and everyone thought, ‘How pathetic. Why can’t they just admit this was a procedural issue?’ “How sad is it that members of our community are acting in the same bad fashion?” “Israel Apartheid Week” is being marked on campuses across the United States throughout the month of March.Aryeh, the Columbia Students Association for Israel, deals frequently with calls for divestment on campus and has started a counter- divestment campaign called “Invest in Peace,” which aims to show that the Boycott Divestment Sanctions movement is “divisive” and “unproductive.”“It doesn’t call for a two state solution and it’s doing all those things that radicalize elements on both side,” Greenbaum told the Post.“If you believe in peace, and you believe that there are two distinct national groups with legitimate claims for their land, then you need to be working together and figure out how to solve problems on the ground, but divestment is not gonna do anything but lead to war and isolation on both sides,” she continued.Recently, she told the Post, BDS-affiliated groups at the university had begun calling for an intifada.“They called it civil disobedience,” she said. “That crossed the line, that did feel anti-Semitic, targeting and scary. Until that tangible call for violence, this was all just rhetoric and discourse and it was all fine.“At the end of the day, we are an institution that believes in free speech and so students are free to call for whatever they’d like,” Greenbaum said. “Whether the board of the university will actually divest, that’s a different question.”Members of her organization “would love” to speak to Students for Justice in Palestine, she said but stated that that group’s policy does not allow for the dialogue.“That’s unfortunate, but that’s how they’ve chosen to play this game,” she said.Just before Israel Apartheid Week began last week, some 40 Columbia University faculty members signed a petition urging the institution to divest from companies that “supply, perpetuate and profit from a system that has subjugated the Palestinian people.”According to the petition, the signatories “stand with Columbia University Apartheid Divest, Columbia Students for Justice in Palestine, as well as with Jewish Voice for Peace in calling upon the university to take a moral stance against Israel’s violence in all its forms.”JTA contributed to this report.