City’s rabbi calls for unity ahead of local election. 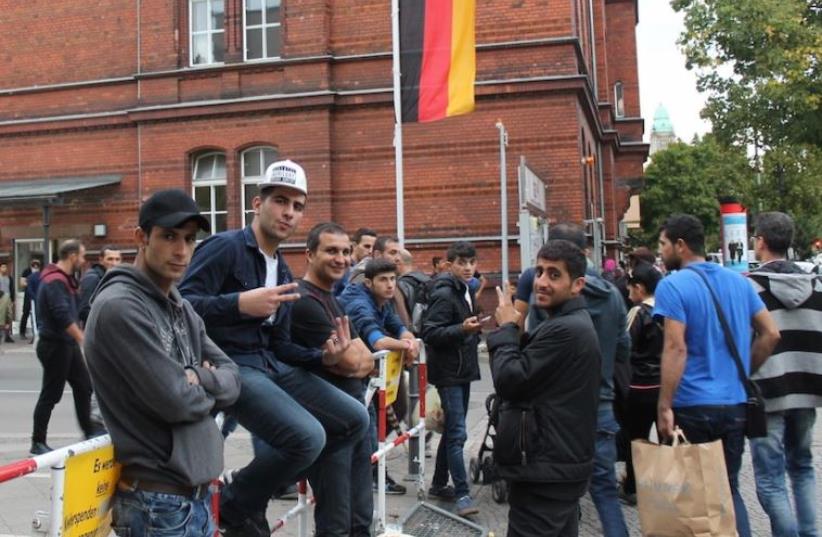 Sryian Refugees in Berlin
(photo credit: URIEL HEILMAN/ JTA)
Advertisement
The rabbi of the Jewish Community of Berlin called for unity between Jews and Muslims in a ceremony that included Syrian refugee children, a week ahead of the Berlin State Parliament elections.The event, held earlier this week, was arranged in honor of a new Torah Scroll received by the Orthodox community at the Münstersche Street Synagogue in the city.Community rabbi and president of the Chabad Jewish Education Center Rabbi Yehuda Teichtal led the ceremony, attended by children of the Jewish community alongside 10 young Syrian refugees, who together held torches. The Syrian children were joined by their families and 150 members of the Jewish community. “We seek to live our lives in peace” Teichtal said, addressing local unrest as the September 17 election approaches.The far-right Alternative for Germany (AfD) has climbed steadily in national polls lately, and is expected to win 15% of the vote in the Berlin election, according to a poll released last week by broadcaster ARD. The AfD has played on the public’s angst that refugees, some 70% of whom are Muslims, are overrunning Germany, siphoning away housing, resources and jobs. German Chancellor Angela Merkel has rejected that argument.“The Torah teaches us to love humanity as a whole and to always reach out to those in need,” the Brooklyn-born Teichtal told his congregation. “Unfortunately, we have been witnessing those who try and spread hate while taking advantage of the fear and uncertainty of this time,” he continued, without naming any parties or individuals.“This kind of manner is one far from the Jewish customs and Jewish values. We mustn’t forget that regardless of the time, and no matter what the political arguments are, we must unite as a whole and together look forward to a time of peace.”Addressing the Syrian children, the rabbi told them that it was “an honor for me you joined us today and celebrated with us. God has brought us all to this part of the world. I wish that we all do our best to allow us all to live in love and peace together.”Following the ceremony at the synagogue, participants marched through the city streets carrying the new Torah scroll, and seeking to spread messages of tolerance, love, freedom and hope.The welcoming of the synagogue’s 10th Torah scroll was one of the many events held by Teichtal’s congregation as he celebrates 20 years of work in the Jewish community of Berlin.Teichtal lauded the parade as “an alliance between God and us all to live our lives together in harmony.”The rabbi has been working consistently with the city’s refugees, donating clothing, blankets and other supplies, inviting them to community events and coordinating visits between children from the Jewish Traditional School, which he founded, and their Syrian counterparts.Reuters contributed to this report.