Maps also hone in on faculty members who back academic boycott of Israel. 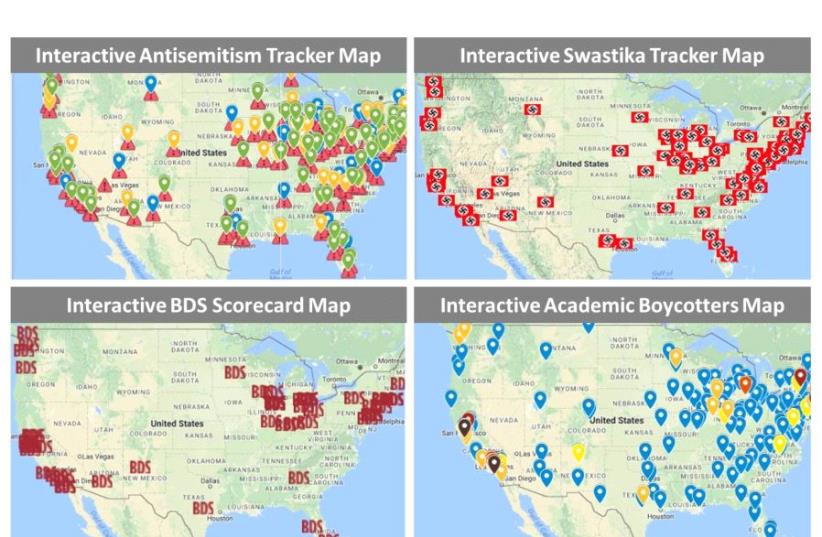 Interactive maps created by AMCHA Initiative that flag campus antisemitism
(photo credit: Courtesy)
Advertisement
Campus antisemitism watchdog the AMCHA Initiative has unveiled four interactive maps that aim to expose sites of anti-Jewish activity at college campuses across the US.The maps can help one understand the distribution and geographical patterns of anti-Jewish incidents, AMCHA said on Wednesday.The Antisemitism Tracker Map includes all types of antisemitic incidents that were reported on US campuses since 2015.The Swastika Tracker Map homes in on swastikas and graffiti, signs, posters and letters found on campus since 2015, that call for killing Jews, such as “Kill all kikes,” “Gas Jews die” and “Gas the kikes.”The other two maps deal with BDS activity: One shows voting results of campus boycott resolutions from 2012 until today and the other maps faculty members who have signed one or more public documents endorsing an academic boycott of Israel. This map also contains subdivisions that calculate the number of faculty members who support the boycott per school, and their names.
Bill banning boycotters , anti-Israel activists from visiting Israel becomes a law after Knesset approval on March 6, 2017 (credit: REUTERS/KNESSET CHANNEL)
The initiative comes after the Knesset passed a law earlier this month that allows the interior minister to ban foreigners who support the boycott of Israel from entering the country.AMCHA told The Jerusalem Post on Thursday that its new maps had no connection to the law and that the NGO has not taken a position on the legislation.“AMCHA is not an organization trying to protect Israel but to protect Jewish students,” Tammi Rossman- Benjamin, AMCHA Initiative founder and director, told the Post.She added that research has shown that there is a strong correlation between anti-Zionism and anti-Jewish hostility on campus.“In 2015 and 2016, acts of anti-Jewish hostility were nearly three times as likely to occur on campuses where BDS was present, and four times more likely to occur on campuses with one or more faculty members who endorsed an academic boycott of Israel, i.e., a boycott of Israeli universities and scholars,” she pointed out.“In fact, the more faculty boycotters and BDS activity, the more incidents of anti-Jewish hostility on a particular campus.”She noted that the lists of faculty members who have endorsed a boycott of Israeli academics have been available on the California-based AMCHA’s website since 2014.“The antisemitism plaguing our nation’s colleges and universities continues to grow,” Rossman-Benjamin said in a statement. “One of AMCHA’s main goals, one we take very seriously, is documenting and exposing the threat.“We hope these new education and research tools will prove helpful to advocacy organizations, government officials, university administrators, researchers and concerned parents, students and university stakeholders.”She encouraged US students to take an active role in documenting any antisemitism they witness, by uploading pictures to a new photo gallery section on AMCHA’s Facebook page.“It’s one thing to read about antisemitic incidents; it’s quite another to see them. As they say, a picture is worth a thousand words,” she said, expressing hope that the social media tools would help generate awareness of the situation.Also addressing this issue on Wednesday, Aviva Vogelstein, attorney for the Washington-based Louis D.Brandeis Center for Human Rights Under Law, testified at a hearing at the Tennessee General Assembly about the spike in campus antisemitism and urged lawmakers to pass a recently introduced bill to address the threat.“Valid monitoring, informed analysis, and effective policy-making start with uniform definitions,” said Vogelstein. “The use of a uniform definition serves several important public policy objectives: enhancing clarity of policy and predictability of enforcement, improving prevention by increasing consistency, and facilitating comparison of intervention and prevention programs across jurisdictions and data collections.”Kenneth L. Marcus, the Brandeis Center’s founding president, said, “A resurgence in antisemitism has been spreading across our nation of late. It is particularly rampant on college campuses and, sadly, Tennessee has not been immune to this escalating hatred.”