The issue arose after a Conservative MP asked the prime minister whether he agreed that anti-Semetism was a problem that should be forcefully eliminated from both private and public organizations. 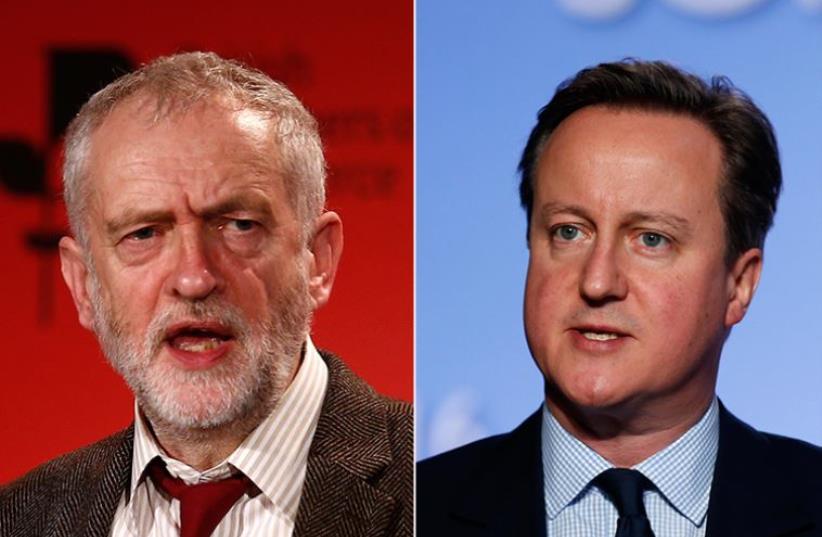 David Cameron and Jeremy Corbyn
(photo credit: REUTERS)
Advertisement
British Prime Minister David Cameron on Wednesday told the leader of the UK Labor faction that it was his responsibility to "sort out" the growing anti-Semitism pervading his party, according to the Jewish Chronicle. In a heated debate during Prime Minister's Questions in the House of Commons, Cameron called out the Labor leader Jeremy Corbyn on the rising tide of anti-Jewish sentiment festering in parts of his party. “I say to the leader opposite, it’s his party. He should sort it out," said Cameron while pointing directly at Corbyn during the parliamentary session.The issue arose when a Conservative MP asked the prime minister whether he agreed that anti-Semetism was a problem that should be forcefully eliminated from both private and public organizations.“Antisemitism is an absolute cancer in our society and we should know when it grows it is the signal of even worse things happening," said Cameron in his response. “There is sadly a growth of antisemitism in our country and we see it in terms of attacks on Jewish people and Jewish students,” the prime minster added.The Labor Party has been struggling with the perception that it supports anti-Semitism since a number of incidents involving party members making anti-Jewish statements were made public. Earlier this week, Lord Michael Abraham Levy, once a music industry executive and close advisor to past UK prime minister Tony Blair, threatened to quit the Labor party after faction member and former parliamentary candidate Vicky Kirby was suspended (for the second time) due to tweets stating that Jews have “big noses” and “slaughter the oppressed.”Her comments resurfaced after she was made a local vice chair of the party last week.The debate also come on the heels of yet another official resigning from the Oxford Labor Union Club following claims that the organization forced members to “subscribe to a radical ideology of division and isolation,” the Jewish Chronicle reported Monday.His resignation follows that of former Labor party co-chairmen Alex Chambers, who quit last month after claiming the university club had “some kind of problem with Jews.”Another incident came as Labor member Gerry Downing was readmitted into the party in February after publicly stating last year it was time Britain answer the "Jewish Question."The "Jewish Question" refers to a centuries old debate in Europe pertaining to the appropriate status and treatment of Jews in society.Downing also found controversy in 2014 when he referred to "Hamas heroism" in a tweet posted in 2014. He was suspended from the party again earlier this week.Corbyn on Monday denied that anti-Semitism was a pervasive problem within the party, and said that Labor has been unequivocal in its condemnation of racism in any form."Since I became leader I’ve absolutely condemned anti-Semitism, I’ve condemned Islamophobia, I’ve condemned any form of racism anywhere in our society," Corbyn told Sky News during an interview this week.The far-leftist himself has been dogged by allegations of anti-Semitism, and in the past has called terrorist organizations such as Hamas and Hezbollah "friends."