"Our aim was to recreate those conditions. And now we can watch, in real-time, as each [genetic] domino hits the next one in line.” 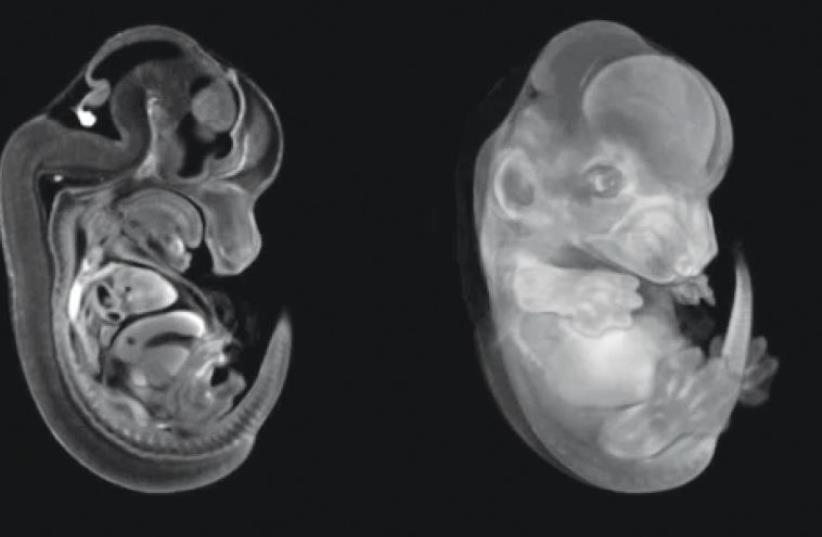 WEIZMANN INSTITUTE scientists have studied the effect of cytomegalovirus on mouse fetuses.
(photo credit: Courtesy)
Advertisement
Prof. Jacob Hanna of the Weizmann Institute of Science and his team have managed to grow mouse embryos outside of the womb for observation.
The research was released on Wednesday and published in Nature.
This feat has never been successfully accomplished before, though the idea has existed since the 1930s. The ability to observe an embryo offers vast possibilities in better understanding embryonic development in mammals, especially in the fields of DNA research and embryo implantation. It could shed light on the science behind miscarriages and failures in implantation, as well as stem cell differentiation and the cause of many developmental disorders.
“If you give an embryo the right conditions, its genetic code will function like a pre-set line of dominos, arranged to fall one after the other," Hanna said. "Our aim was to recreate those conditions, and now we can watch, in real-time, as each domino hits the next one in line.”
It took Hanna's team over seven years to perfect those conditions and grow embryos outside of the uterus. They finally succeeded to grow them for six days – by which time, at two-thirds of the gestation period, all of the organs were already formed and visible for observation.
In order to do so, the team first removed young embryos and isolated the 250 stem cells that would normally attach onto the uterus in the mother. Instead, they managed to attach them to laboratory dishes using a growth medium. The embryos began their growth from there as though they were in the uterus.
After two days, researchers moved the embryos to automatically rotating beakers, which bathed them in a constant flow of nutrients, mimicking the blood flow to the placenta. They were careful to have precise balances of oxygen, carbon dioxide, gas pressure and other crucial factors.
The process of the embryo's development was confirmed to be normal through comparisons to embryos removed after every stage from parallel internal embryonic growth. In further experiments, fluorescent colors were injected into certain organs to track their growth.
Hanna was excited about the future possibilities this success could initiate. “We think you can inject genes or other elements into the cells, alter the conditions or infect the embryo with a virus, and the system we demonstrated will give you results consistent with development inside a mouse uterus,” he said.
This grand accomplishment promises to progress the field of biological development without breaking any budget or needing quite as many lab animals.
The next phase of the research will attempt to produce the embryos and fetus entirely artificially.
Sign up for the Health & Wellness newsletter >>