After attacks in the UK and Norway, questions are being asked about whether a new wave of extremism could be bubbling to the surface.

The murder of MP Sir David Amess in the UK on Friday and the bow-and-arrow attack in Norway two days earlier in which five were killed have raised concerns that extremism may be returning to the streets of the UK and Europe, even if it has not yet been determined if both the attacks were terrorism.

Although it has been only a few years since the Paris attacks in 2015 and the Manchester Arena bombing in 2017, there was a sense that extremist threats had been reduced.

The decline and fall of ISIS, for instance, seemed to take the wind out of the sails of extremists. ISIS had radicalized many and used social media to recruit more than 5,000 fighters in Europe. Many European women, some of them converts, flocked to join ISIS. But ISIS apparently lost some of its popularity.

The recent victory of the Taliban in Afghanistan may have given some hope to extremists in the world. But the Taliban appear more state-minded and tame than in the past. They are openly linked to Turkey, Qatar, Pakistan and other countries that want to work with them or have supported them.

That means they are more bourgeoisie, enjoying time at the Doha Sheraton, and joining the jet-set elites who fly from country to country in luxury. 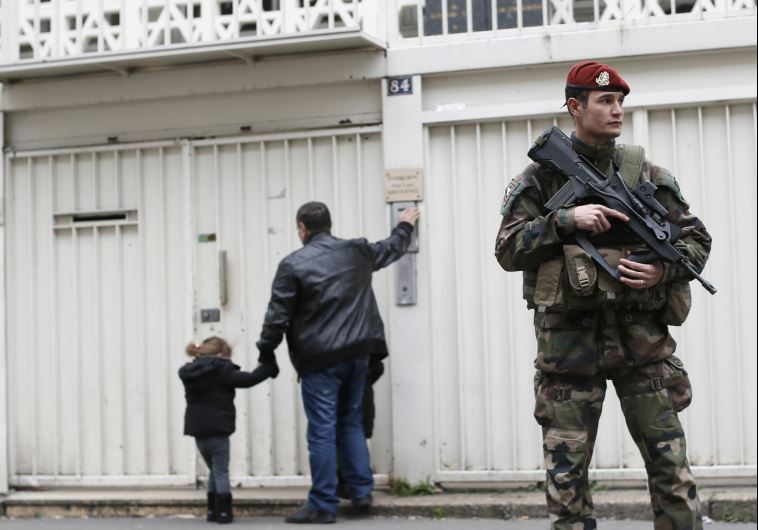 A French soldier secures the entrance to a Jewish school in Paris after the Charlie Hebdo and Hyper Cacher terrorist attacks last January (credit: REUTERS)

How much that motivates extremists is not clear.

In addition, al-Qaeda, which once inspired religious haters the world over, has grown old and tired, barely able to run parts of Idlib Province under its Syrian version, called HTS.

What motivated the UK attack and Norway attack may soon be known. That the men used simple weapons, such as a bow and arrow and knife, apparently, means they didn’t have access to firearms.

There are many groups across Europe, such as drug gangs, that have guns. But the fact that – unlike ISIS in 2015 in Belgium and Paris and other places – these perpetrators didn’t build bombs or have guns, means the kind of planning behind these attacks may be more simple. That points to more lone-wolf organizing and extremism.