The Russia-Ukraine War has caused support for Russia and Vladimir Putin to drop among Europe's right-wing populist parties, especially in Italy.

Positive views of Russia and Russian President Vladimir Putin among right-wing populists in Europe have significantly declined recently, according to a recent Pew Research Center study, which points to Russia's invasion of Ukraine as the reason why.

Among the countries in Europe, the biggest decline in support of Russia and Putin was seen among the political Right in Italy, which is especially significant considering the far-right populist victory in the recent Italian elections held on Sunday.

Traditionally, right-wing populists in Europe were the most likely to view Russia and Putin in a positive light.

That isn't to say it was guaranteed, but just more likely than others.

This is still true to a great extent, but the support is now far less prevalent. 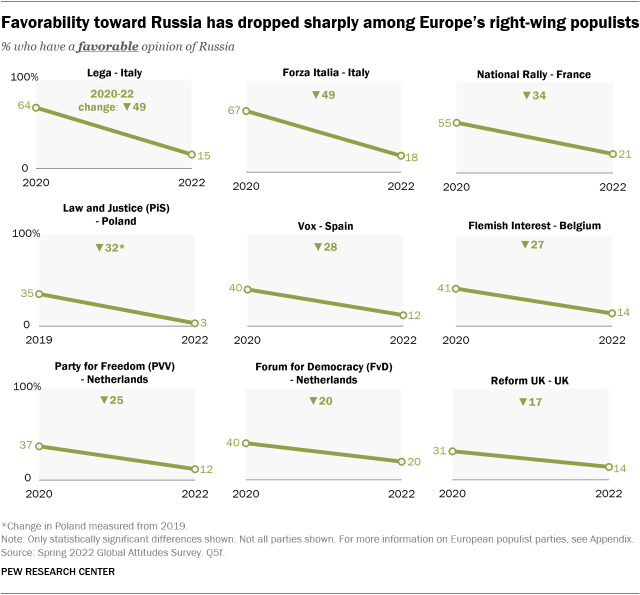 According to Pew, the biggest drops in positive views of Russia are the right-wing populist parties in Italy, specifically Lega and Forza Italia, which will likely be part of Italy's new ruling coalition alongside the Brothers of Italy Party.

This trend was reflected in other parties too, but none of them had as steep of a drop as the two Italian parties, nor did any other have over 50% in terms of favorable views on Russia in 2020 aside from France's National Rally, which had 55% and is now at 21%.

This trend continued when looking at the views of European right-wing populist parties regarding Putin himself. 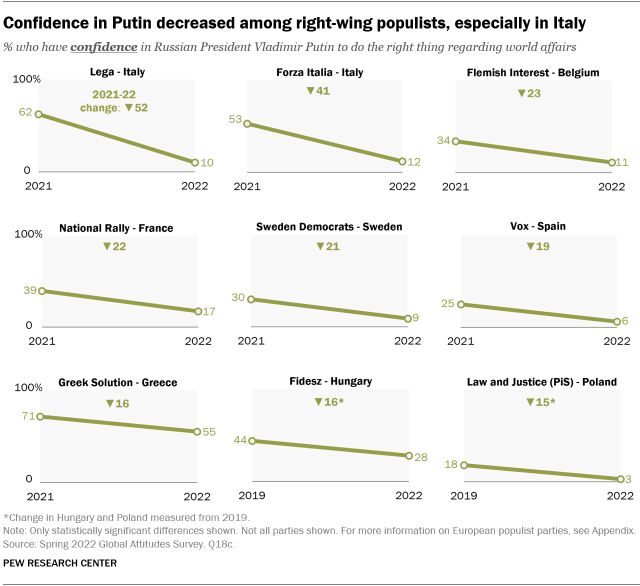 No other right-wing populist parties in Europe experienced a drop on the same level as these Italian parties.

However, it should also be noted that regarding confidence in Putin, another right-wing populist party, Greek Solution in Greece, had higher ratings than its Italian counterparts, with 71% holding confidence in Putin making the right calls on the world stage in 2021. This has since dropped 16 percentage point to 55%, which is still a majority.

Despite all of this, though, these right-wing populist parties are still more likely to have favorable opinions of Russia and Putin than other parties. The only exception to this, according to Pew, seems to be the Jobbik Party in Hungary, which has become more moderate in recent years and opposes Hungarian Prime Minister Viktor Orban.

However, positive views for Russia and Putin among the Greek Solution Party in Greece stand out for their drastically higher levels of support than all the others.

Poland: Where favorable views about Russia, Putin are always low

The reason for this massive drop in positive views among Europe's populist Right is undoubtedly the invasion of Ukraine, which has made many in Europe and abroad sour on Russia.

In particular, this is best exemplified in the Pew study by Poland and its ruling Law and Justice (PiS) Party. Despite PiS having come under fire for extremely controversial right-wing views in recent years on everything from Holocaust restitution and revisionist practices, LGBTQ+ policies and attacks on the European Union judicial system, Poland as a whole has always stood out for extremely critical views regarding Russia and Putin, with Polish President Andrzej Duda comparing having a call with Putin to speaking with Nazi leader Adolf Hitler. 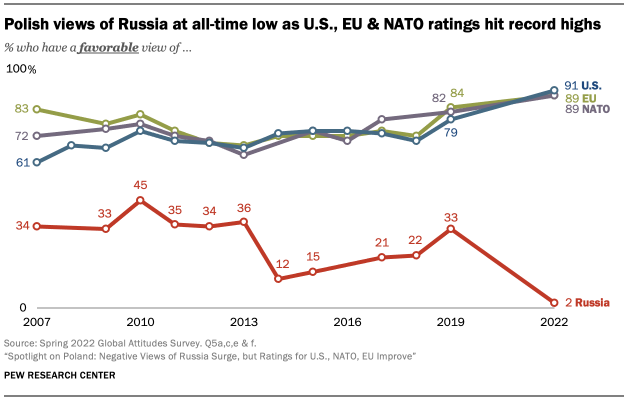 But at the same time, Polish positive views of the US, European Union and NATO have jumped up.

This all underlines how a country whose leadership has reacted so poorly to the EU in recent years still holds them in far greater esteem than Russia and Putin, about whom negative views are almost universal across Poland.

As Putin's invasion of Ukraine continues and tensions continue to rise, it remains to be seen how public opinion will continue to be effected.