The Duke and Duchess of Cambridge, Prince William and Catherine Middleton, are due to visit various WWII and Holocaust memorials during the trip. 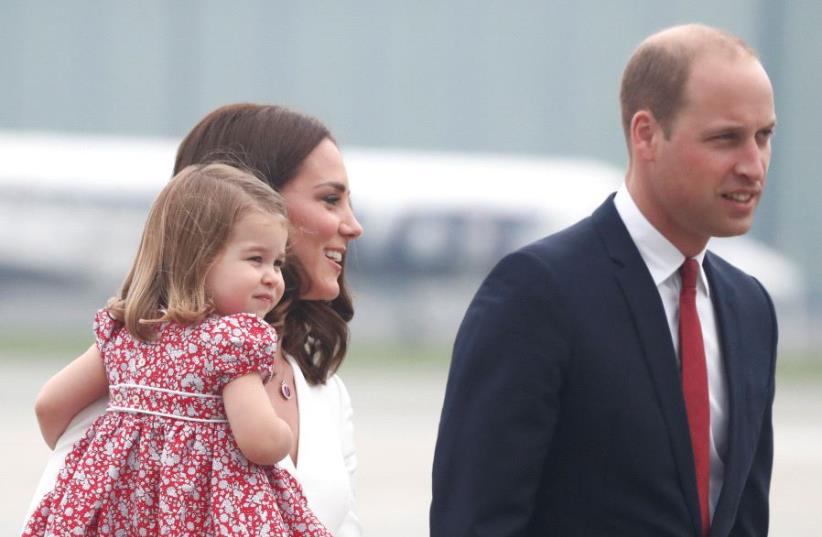 Prince William, the Duke of Cambridge, his wife Catherine, The Duchess of Cambridge and Princess Charlotte arrive at a military airport in Warsaw, Poland July 17, 2017
(photo credit: REUTERS)
Advertisement
WARSAW- Britain's Prince William took his young family to Warsaw on Monday for a four-day tour of Poland and Germany that will take in World War Two memorials and meetings with locals.
The Duke and Duchess of Cambridge arrive in Warsaw
Prince George, who turns four this month, walked down the steps of the plane while his two-year-old sister, Charlotte, was carried down by her mother, Kate."Their Royal Highnesses will take time during the tour to acknowledge the complex 20th century history of each country," Kensington Palace tweeted, adding that they "hope to meet as many people as possible during the tour."William, second-in-line to the throne, and Kate will visit the Warsaw Uprising museum which commemorates a 1944 battle against Nazi German occupiers, in which tens of thousands died and the city was bombed and razed to the ground.

The family receives a warm welcome as they touch down for #RoyalVisitPoland pic.twitter.com/qwQsTfJkJL

"We selected the museum as an example of the adversity Poles have faced, the heroism they have shown," British ambassador to Poland, Jonathan Knott, told Reuters.They will tour a former Nazi concentration camp in Stutthof on Tuesday, the first built by Germany outside its borders after the start of World War Two. More than 85,000 died there.Also on Tuesday, they will visit a museum in Gdansk commemorating the Solidarity movement which shook communist rule in the 1980s. In Germany they are due to visit the Berlin Holocaust Memorial.