Last month Hamas published a video of Hisham al-Sayed lying in bed with a gas mask to help him breathe.

Sha’aban al-Sayed appealed to the United Nations Security Council on Tuesday to save his ill son Hisham, who has been held captive by Hamas in Gaza for the last seven years.

“Hamas is playing with the feelings of the family through the news it delivers,” he told the 15-member body that met in New York for its monthly meeting on the Israeli-Palestinian conflict.

"Hamas is playing with the feelings of the family through the news it delivers,"

Sha’aban spoke with council members virtually on an iPad that Israel’s Ambassador Gilad Erdan brought into the room. An Israeli Bedouin from the town of Hura, Sha’aban spoke to the UNSC in Arabic and his words were not translated by the UN.

“According to the press and the journalists in Gaza,” Sha’aban said, his son’s health situation is “very dangerous.”

Last month Hamas published a video of Hisham lying in bed with a gas mask to help him breathe. 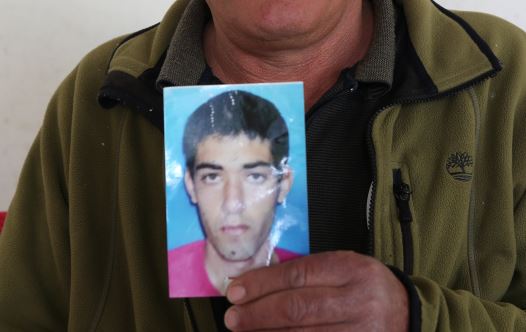 Sha'aban al-Sayed, father of Hisham, a Beduin Israeli who disappeared a year beforehand from his home in the Negev desert, shows a photo of his son at their family home in Hura on April 13, 2016 (credit: YOAV LEMMER/AFP)

“Everyone knows that my son Hisham has special needs and that he suffers from mental and intellectual disabilities,” Sha’aban said.

"I appeal to the UNSC to intervene and exert efforts and pressure on Hamas and the Palestinian Authority to release him as soon as possible and not to use him as a card against the State of Israel,"

“I appeal to the UNSC to intervene and exert efforts and pressure on Hamas and the Palestinian Authority to release him as soon as possible and not to use him as a card against the State of Israel,” Sha’aban said.

“According to international laws and international treaties the rights of people with special needs must be protected,” Sha’aban stated.

Erdan closed the iPad after Sha’aban spoke and added words of his own.

Here is a father – a father of a son with special needs – that is begging this council, begging you to take action. Hamas is using his boy as a sick bargaining chip and the world remains silent,” Erdan said.

“I hope we all internalized his words,” he added.

“This council is so quick to issue statements regarding events that happen in the Palestinian territories. Where is the statement condemning Hamas over Hisham’s kidnapping and torture?,” Erdan asked.

In addition, it is presumed that Hamas is holding the bodies of two Israeli soldiers believed to have been killed during the 2014 Gaza war: Hadar Goldin and Oron Shaul.

Next week, starting on August 3, activists plan to march from the Goldin’s home in Kfar Saba to the Gaza border to demand the release of the four men.

Hadar’s twin brother Zur Goldin published a video in which he called on the Israeli public to join him.

“This is an appeal to everyone who hears, sees and cares,” said Zur.

His brother, he said, had served for eight years in a Givati unit defending the country, but “no one has fought for him.”

The government has not done anything to bring “my brother home,” Zur said.