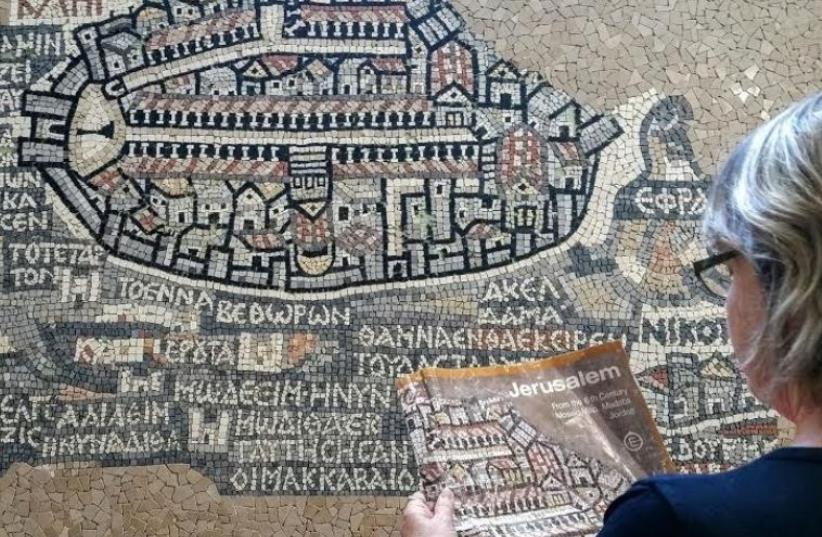 The Jewish Quarter’s Madaba Map replica.
(photo credit: COURTESY OF EILON MOSAIC)
Advertisement
To celebrate the 50th anniversary of the reunification of Jerusalem in the 1967 Six Day War, several government agencies have joined forces to restore a Byzantine-era mosaic in the Cardo section of the Old City’s Jewish Quarter, and add nine new colorful mosaics.The beautification project was recently initiated by the Company for the Reconstruction and Development of the Jewish Quarter and the Tourism Ministry, with aid from Jerusalem Affairs Minister Ze’ev Elkin, the Jerusalem Foundation, the Jerusalem Municipality and the Israel Antiquities Authority.According to Pini Refael, manager of the company’s education and tour guide department, Jerusalem’s Cardo dates back to the 6th century CE, and is depicted on the Madaba Map, part of a floor mosaic discovered in 1884 in a Byzantine church in Madaba, Jordan.To mark the capital’s half-century milestone, Refael said it was decided to focus on the Jewish Quarter’s rich historic culture and art. Apart from the replica of the Madaba Map, he said the nine other mosaics will illustrate the stories of people who lived and worked there during Byzantine times.“We’re talking about fruit and vegetable shops, pottery shops, and animal shops,” Refael said.The additional mosaics, he noted, were painted by Israeli artist David Harel and built by Eilon Mosaics, a company based in Kibbutz Eilon, in the North.The Cardo stretches north to south, from Damascus Gate to David Street.The southern section continues from there along the length of the western side of the Jewish Quarter, where the mosaics will appear between Chabad Street and Hayehudim Street.“The idea of the project, which came from the head of my company and the Tourism Ministry, is to celebrate the reunification by renewing the Jewish Quarter and providing visitors with a new experience there,” he said on Monday, following a press conference announcing the initiative.“The Madaba Map describes the holy places in the area of Israel for the Christians, from Lebanon down to Egypt. It’s one of the most important maps, which describes Israel from the second half of the 6th century, and takes us back to the Byzantine period, when the Holy Sepulchre and other significant churches were built for the Christians.”The original map mosaic, he said, was made following excavations in the Jewish Quarter after the 1967 war. In the southern section of the Cardo, buildings from later periods were removed, revealing the Byzantine Cardo level.Some of the columns have since been restored, and today the public can walk through the Cardo as residents of Jerusalem during the 6th century CE once did.Noting its presently austere appearance, Refael said the new mosaics will add fresh life to the celebrated corridor.“It’s very gray, cold, and boring now, so we decided to do something else by adding more colors,” he explained, adding that each mosaic will be approximately 4 meters high and 4m.wide. The project began one month ago and Refael said it will take about a year to complete.