Graham Russell and Russell Hitchcock first met in 1975 and set up their soft rock outfit together.

Australian-British soft rock outfit Air Supply is coming back, for the fourth time, to perform some of their seemingly endless string of definitively melodic numbers and, while they’re at it, spread some much-needed good vibes around. The ambiance should be suitably charged when they appear at the Haifa Convention Center (May 27) and Live Park in Rishon Lezion the next night (both 9 p.m.).

“For some reason, the music means a lot to people,” says songwriter-guitarist-vocalist Graham Russell. “You see it when we step on stage. People stand up, and they’re crying and they’re laughing and they have a great time. So, something’s going on,” he adds with a chuckle.

Something has been “going on,” admittedly with a few early stutters, for 47 years. Russell and Australian singer Russell Hitchcock first met up, in 1975, when they were in the cast of the Australian production of hit musical Jesus Christ Superstar. It seems the fates summarily threw them together. “I think we were predestined to meet. And I’m a big believer in that. We were just thrown together,” says Russell who hails from what he calls “a small working-class village near Nottingham,” in England. “I could have gone down the coal mines, likes everybody else where I lived. Thankfully, I didn’t.”

Thankfully. Had that happened, not only would Russell would have had a far less healthy means of making ends meet, millions of adoring fans, around the world and across the generations, would have been deprived of such timeless classics as “Lost In Love” and “All Out Love,” which came out in 1979 and 1980 respectively.

Both were huge hits and cemented the duo’s place as one of the world’s biggest soft rock acts. Since Air Supply started life, in 1975, the group has put out 17 studio albums, 13 compilation albums, 4 live albums and 27 singles, racking up sales of in excess of $40 million in the process. 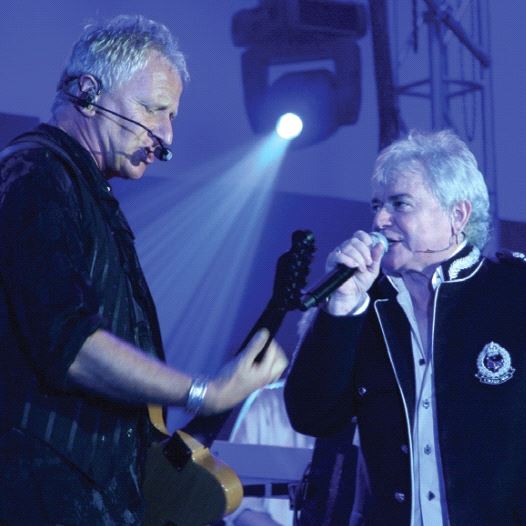 But it might have been so different had Lady Luck, eventually, not smiled down on Russell and Hitchcock and opened up some crucial doors for them.

The pair’s initial rendezvous was the result of circumstance. “We were the only two people in [Jesus Christ] Superstar who didn’t know anybody,” Russell recalls. “The rest of the cast were all actors and musicians, and they’d all been in other shows. It was like the first day at school for Russell and me. You know, when you’re in the playground and you don’t anybody, you go and hide behind a brick wall. That was both of us. So, by chance, we sat next to each other.”

THAT MEANT they were in adjacent earshot and Russell was able to appreciate Hitchcock’s vocals from close quarters. The Brit heard his new Aussie pal singing and complimented him on his voice. A lifelong friendship and an enduring hugely successful professional liaison were in the making. “There are certain moments when Russell and I are traveling, we wonder what would have happened in that scenario. We’ve always thought the Universe threw us together. I’m a great believer in that.”

Russell notes all sorts of interfaces between them. “We were both born in June, we’d both seen The Beatles when we were 14 – that was the first concert I ever went to. And, when we met, Russell said ‘hey, we’ve got the same name!’” The Fab Four and the music his parents played at home – the likes of George Gershwin, and Rodgers and Hammerstein – laid the solid foundation for the songwriter’s enduring love affair with close harmony and strong melodies.

During Jesus Christ Superstar’s 18-month run the two got together to try out numbers Russell was writing, and began doing late-night rounds of the local pub and other cozy music venue scenes. Their initial close harmony group morphed into Air Supply and their first single, “Love and Other Bruises,” made number 6 on the Australian Billboard chart.

That wasn’t quite the big time, but things stepped up incrementally when, after Air Supply released its second album, British megastar rocker Rod Stewart asked them to open for him Down Under. Stewart was suitably impressed and the Australian circuit was followed by a five-month stint with Stewart around the United States. Russell and Hitchcock felt they’d made the big time, playing on the grandest stages America had to offer, including Madison Square Garden in New York.

But the pair was in for a rude wake-up call. “We came back to Australia and we discovered we’d been forgotten,” Russell recalls. “They didn’t know who we were.” Things hit rock bottom when, at one gig in Sydney, no one turned up.

It could have gone completely and irretrievably pear-shaped but, somehow, they managed to turn things around. Russell headed for home, in Adelaide, to write some songs, hoping against hope that his muses would deliver. Three months later, Hitchcock made the long trek over from Melbourne to see what his pal had come up with. “He came down, I think it was by bus, and I played him ‘Lost In Love.’ Russell said: ‘That’s the one. That’s going to change everything.’”

HITCHCOCK WAS spot on, even though there were a few more challenging twists to be negotiated, including Russell being confined to his hotel room for three days, with food poisoning, after scraping together a few pennies to get to the Midem music industry trade fair in Cannes, France. He missed the whole event, including a bunch of meetings with industry leaders but– unbeknownst to Russell and Hitchcock – word of “Lost In Love” and other charts Russell had penned during his Adelaide stint had gotten out to the world, via the Australian arm of the CBS record company. Clive Davis, of Arista Records had gotten in on the act, and the rest is now history.

“There is never a day that goes by without me and Russell feeling grateful for what has happened to us, and Air Supply, over the years,” the songwriter says. “We could have packed it in back then, on more than one occasion, but we kept going and we got our luck.”

Close to a half a century on, Russell and Hitchcock are still playing to adoring fans all over the globe. It appears to work well, on all levels. That, Russell feels, is largely down to their live and let live ethos. “The great thing about our relationship is that Russell doesn’t want to write songs. He doesn’t know how to write a song. And I don’t want to be a singer, because I’m not a lead singer. I’m a songwriter that sings and he’s a lead singer. We both love our roles.”

While one revels in getting into the nitty-gritty of the creative machinations, the other just gets on stage and pumps out the mellifluous vocals. “I love working on production, and putting everything together. Russell just likes to come in and sing. But when he does, everything changes. When he sings the songs I write something happens. I can do demos, but when Russell sings it, it goes to another level.”

The pair is also perfectly happy to keep on playing those yesteryear hits, along with some newer material from across their extensive discography. They also have the knack of being able to perform numbers time and again, year after year, without getting staid.

“The nucleus of our show is all the big hits. Fortunately, we have a lot of them,” Russell says without a hint of hubris. He is a great believer in entertaining. “People come to our show, and they want to hear ‘I’m Lost In Love’ and ‘All Out of Love,’ and we play them. And we don’t just play them. We love playing them. We’ve played over 5300 shows in our career, and there’s never been one time when I’ve thought ‘Oh dear, here we go again.’ We just love every moment.”

Russell and Hitchcock also like playing here. “I think Israel is a great place,” says the 71-year-old Brit. “We love coming there. There is just such a diversity of people and cultures. People say aren’t you worried about going to Israel. We are not worried. We are just coming to spread love and bring people together.”

Sounds like a cue for an Air Supply song.