Eucalyptus offers food from the Bible 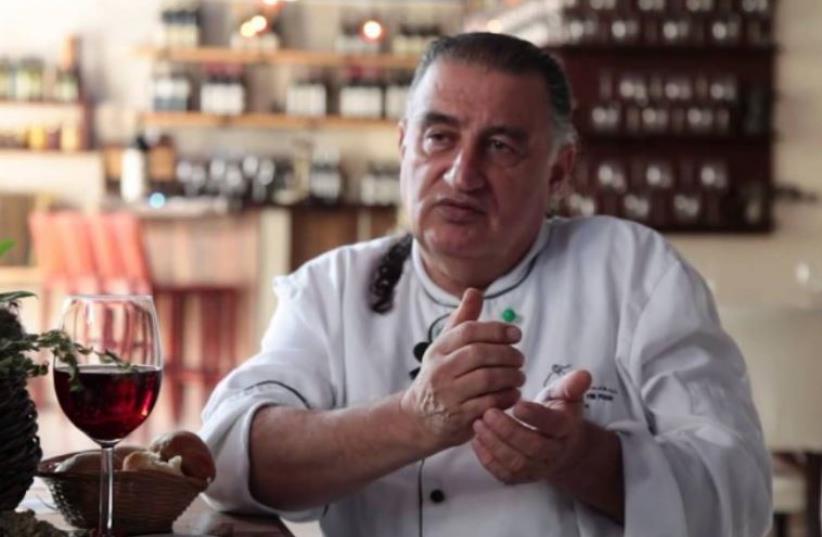 Chef Moshe Basson
(photo credit: EUCALYPTUS RESTAURANT)
Advertisement
It started with a tree. In 1960, as a young man, Chef Moshe Basson planted a eucalyptus tree in the yard next to his family’s small stone house in the southern Jerusalem neighborhood of Talpiot. Twenty-five years later, he built a restaurant around the tree, with its branches shooting through the ceiling, surprisingly enough naming it Eucalyptus.“I wasn’t sure my father would let me plant a tree that didn’t bear fruit,” says Basson, who was born in Iraq and came to Israel with his refugee family as a nine-month-old baby. “But he did and that was the start of everything.”His family came bearing laissez-passer documents bearing the stamp “one way,” he recalled, in a conversation with The Media Line.The first restaurant was a small, workers-type restaurant, with red and white checked oilcloth tablecloths that could be wiped off, rather than laundered. But one bite of the Biblically-inspired food made it clear that Eucalyptus was something new on the Israeli food scene.The restaurant has moved several times, and closed for a few years at the height of the second intifada in 2002 when tourism plummeted. Today it is at the top of Hutzot Hayotzer, a pedestrian lane with artists’ shops, just outside the walls of the Old City.Restaurants throughout Jerusalem have suffered since the beginning of the current wave of stabbing and shooting attacks. Basson says that for now, he’s been lucky.“We have been full every night except Saturday nights,” he said. “It’s really a miracle.”Basson grows some of his spices right in front of the restaurant. He is wont to roam the Jerusalem hills foraging for wild plants. His dishes use spices that are mentioned in the Bible – among them hyssop, a type of wild oregano, along with sage and thyme.“I love using the spices of the Bible,” says Basson, always dressed in impeccable chef’s whites, his black hair combed back into a narrow Bohemian-style braid. “We use all of the seven species mentioned in the Bible – wheat, barley, grapes, figs, pomegranates, olive oil, and date honey.”Every dish at Eucalyptus comes with a story, and sometimes a ceremony.There is chubeiza, (mallow) a wild green leaf that became a food staple during the siege of Jerusalem in 1948 when food was running short; there is eggplant baked with tehina, with silan (date honey, which is what the Bible means by honey) and pomegranate seeds, and there is one of Basson’s signature dishes “maqluba.”Maqluba or “upside down” is a Palestinian dish of layers of rice, potatoes, eggplant, and chicken. Basson bangs a gong and asks a volunteer to move his hands in circles over the pot, as the crowd counts to seven. Then the volunteer lifts the pot straight up, dropping a mound of rice and vegetables topped with golden braised chicken.Basson warns him that if he messes up, he will be doing the dishes for the evening.Basson is a member of Chefs for Peace, a group that organizes joint events for Israeli and Palestinian chefs. He has twice won the Cous Cous Fest, an international competition for couscous, a Moroccan dish that Basson says is also mentioned in the Bible as “solet,”, which was one of the daily sacrifices in the Temple. His son Ronny, also a chef, has won once.Basson also offers cooking workshops, and three different tasting menus. The most expensive, the Queen of Sheba menu at $80 per person, offers small portions of everything the restaurant has to offer, as well as wine.There are also cooking classes and shopping in the nearby open air fruit and vegetable market.Basson never forgets a face, and can often remember when a diner last visited. When I came recently one night with my daughter, now 21, he looked carefully at her and said, “The last time I saw you, you were about three and your father was carrying you on his shoulders at my first restaurant in Talpiot.”Basson generously shares his recipes with both chefs and customers.“All I care about is that people learn about this type of food,” Basson says. “The more people who make it, the better.”Read more stories from The Media Line here.