All four of the cakes come out beautifully and so are perfect to serve for Seder or other holiday meals with friends and family.

By PASCALE PEREZ-RUBIN
No-bake chocolate mousse cake
(photo credit: ANATOLY MICHAELO)
Advertisement
This week, I decided to share with you recipes for four festive cakes that I love to prepare for my family on holidays and special occasions. All of them are flour-free (and therefore hametz-free) and perfect to make for Passover. All of the cakes come out beautifully and so are perfect to serve at the Seder or other holiday meals with friends and family. The first one is a rich, no-bake chocolate mousse cake. It’s very easy to make even though it might look complicated at first glance. It’s not low in calories, but each bite is worth it. The second cake is a nut and date cake that my mother used to prepare every year for Passover. Every time I serve this cake I receive loads of compliments. The third cake is a chocolate cake with hazelnut icing that absolutely melts in your mouth. I’ve prepared this so many times I can’t even count and each time I receive requests to prepare it again. The fourth cake is a rich orange nut cake that is light with an amazing citrus flavor. It’s the perfect holiday cake. TiPascaleAll of the dairy ingredients can be swapped for pareve ones; margarine, coconut oil and Rich’s whipping cream all work well in these recipes.  No-bake chocolate mousse cakeUse a 26 cm. springform pan.Ingredients: Base:1 ½ cups roasted nuts (walnuts, hazelnuts or almonds) 3 tbsp cocoa powder, sifted¼ cup brown sugar2 tbsp honey or silan80 g butter, melted1 tsp brandyChocolate mousse:450 g bittersweet chocolate, broken into squares4 heaping tbsp cocoa powder, sifted4 tbsp water or chocolate liqueur½ cup coffee (made from ½ tsp instant coffee mixed with water)3 containers (750 ml) sweet whipping cream3 tbsp sugar2 tbsp orange liqueur1 tsp orange zestToppings:Cocoa powder, siftedWhole hazelnutsChocolate swirlsDirections:To prepare the base, add all of the ingredients to a food processor and blend for a few minutes until well mixed. Grease a pan and pour in the mixture. Press down well. Put in the fridge for 35 minutes. To prepare the mousse, add the following to a bowl and heat over a bain-marie: chocolate, cocoa powder, water or liqueur, and coffee. Stir over a low flame until everything has dissolved. Transfer to a large bowl. With an electric mixer, whip the cream and then gradually add the sugar. Whip until stiff peaks form. Add one-third of the cream to the chocolate mixture, then fold in the rest of the cream, orange liqueur and orange zest. Mix well. Pour the mixture into the pan with the nut base and flatten. Cover the pan well with plastic wrap and then aluminum on top and store in the fridge overnight. Before serving, sift cocoa powder on top and add nuts and chocolate swirls. TiPascaleTo release the cake from the pan easily, dip your knife into hot water and then dry it off. Insert the knife between the cake and the sides of the pan. Release the springform sides. Slide the cake with a hot knife.  Nut and date cake
Nut and date cake (Credit: Anatoly Michaelo)
Use a 35 cm. x 27 cm. pan or a 26 cm. springform pan.Ingredients:Cream:1 container (250 ml) sweet whipping cream3 tbsp sugar1 packet vanilla sugar100 g white or bittersweet chocolate, broken into squaresDough:6 eggs, separated¾ cup sugarJuice and zest from 1 lemonJuice and zest from 1 orange½ cup matza meal, sifted25 Medjool dates, pitted and chopped into pieces¼ cup walnuts, chopped½ cup walnuts, ground½ tsp cinnamonPinch of ground gingerPinch of ground cloves1 tsp vanilla extractToppings:½ cup chocolate shavingsCinnamonDirections:To prepare the cream, add the cream, sugar, vanilla sugar and chocolate to a bowl and melt over a low flame until smooth. Store in the fridge overnight. Then transfer to a mixer bowl and whip until smooth. Store in the fridge. To prepare the dough, mix the egg yolks on high speed and gradually add half of the sugar. Mix until mixture is light and fluffy. Lower the speed and add the rest of the ingredients, except for the egg white and remaining sugar. Mix until smooth and then transfer to a bowl. Whip the egg whites in a mixing bowl on high speed. Slowly add the remaining sugar until stiff peaks form. Gradually fold in the egg yolk mixture and mix until smooth. Pour mixture into the pan that’s lined with baking paper and flatten. Bake in an oven that has been preheated to 180° for 45-60 minutes until a toothpick inserted in the middle comes out dry and clean. Spread the cream on top and decorate with chocolate slivers and sprinkle with cinnamon. Store in the fridge. Chocolate cake with hazelnut icing 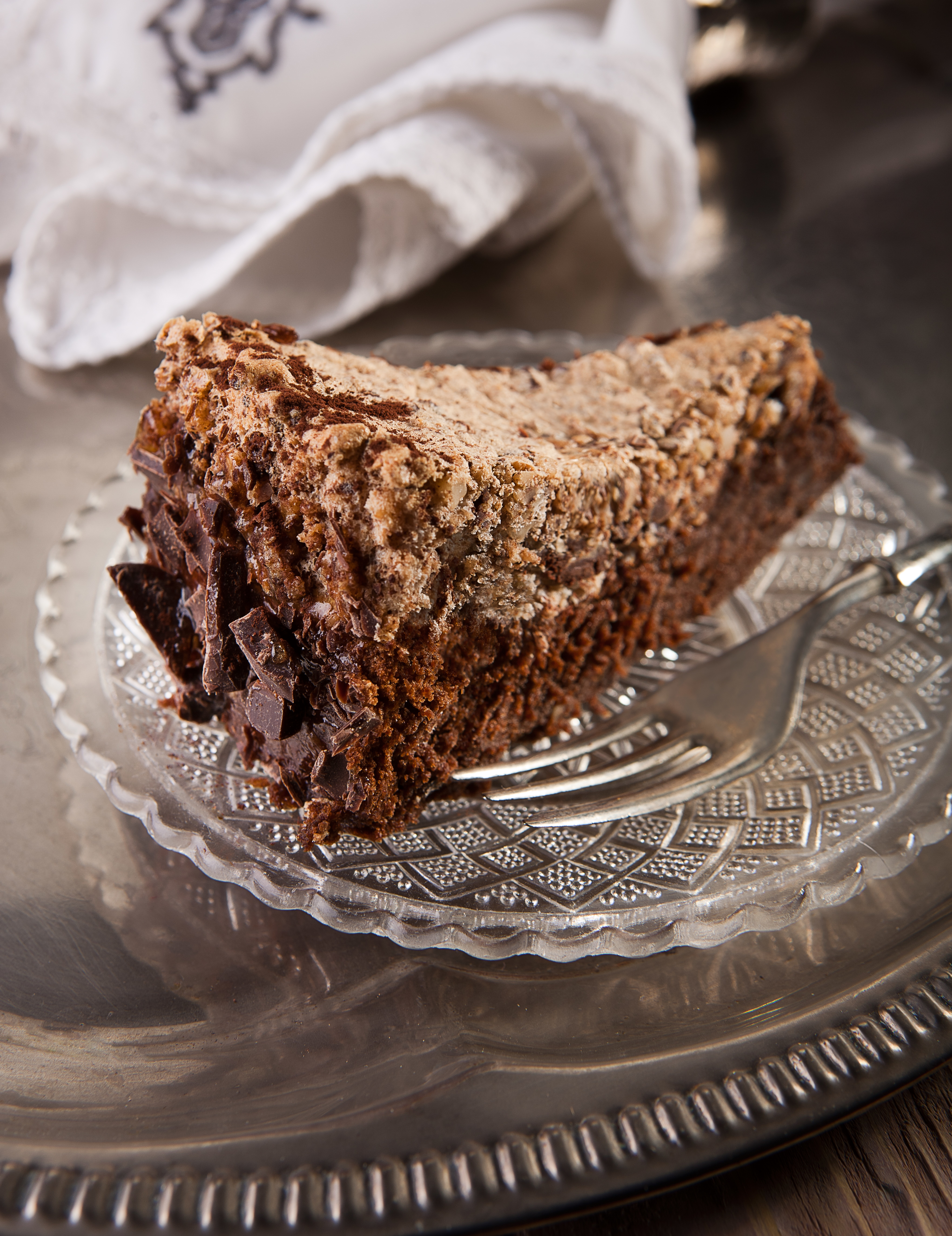 Chocolate cake with hazelnut icing (Credit: Anatoly Michaelo)
Use a 24cm or 26cm diameter pan.Ingredients:Chocolate base:300 g bittersweet chocolate150 g butter, chopped into cubes1 cup demerara sugar5 large eggs, separated3 egg yolks (from large eggs)1 tbsp instant coffee powder1 tbsp bittersweet chocolate liqueur¼ tsp saltHazelnut cream:3 egg whites (from large eggs)1/3 cup sugar2 drops lemon juicePinch of salt100 g bittersweet chocolate, chopped into large pieces100 g roasted hazelnuts, peeled and chopped into large pieces2 tsp cornflourToppings:2 tbsp cocoa powder, sifted2 tbsp chocolate, gratedChopped hazelnutsNote: This cake calls for eight eggs.Directions:To prepare the chocolate base, melt the chocolate in the microwave or in a small pot over a bain-marie. Whip the egg whites from five eggs in an electric mixer until stiff peaks form and then transfer to a bowl. Whip the butter in an electric mixer and gradually add the sugar and the egg yolks from eight eggs.Lower the speed and gradually add the melted chocolate, instant coffee, liqueur and salt. Mix until smooth.Add one-fourth of the whipped mixture to the chocolate. Then add the rest and mix until smooth. Pour into a pan that is lined with greased baking paper and then flatten. Bake in an oven that has been preheated to 170° C for 20 minutes. Raise the temperature to 180° and bake for another 10 or 15 minutes, until a toothpick inserted in the middle comes out dry. (The top layer of the cake will become cracked and it will seem like the rest of the cake is not yet ready, but you should take it out anyway so that it doesn’t dry out.)To prepare the hazelnut cream, place the egg whites from three eggs in the clean bowl of an electric mixer and whip on high speed. Once the egg whites thicken, gradually add the sugar, lemon juice and salt. Whip until stiff peaks form. Fold in the chocolate shavings, the chopped nuts and the cornflour and mix well. Add the egg whites and flatten. Put the cake back in the oven for 15-20 minutes until the egg whites have set. Chill in the fridge. Mix the cocoa powder with the chocolate and sprinkle on the top and sides of the cake. Adorn with chopped nuts.  Orange nut cake 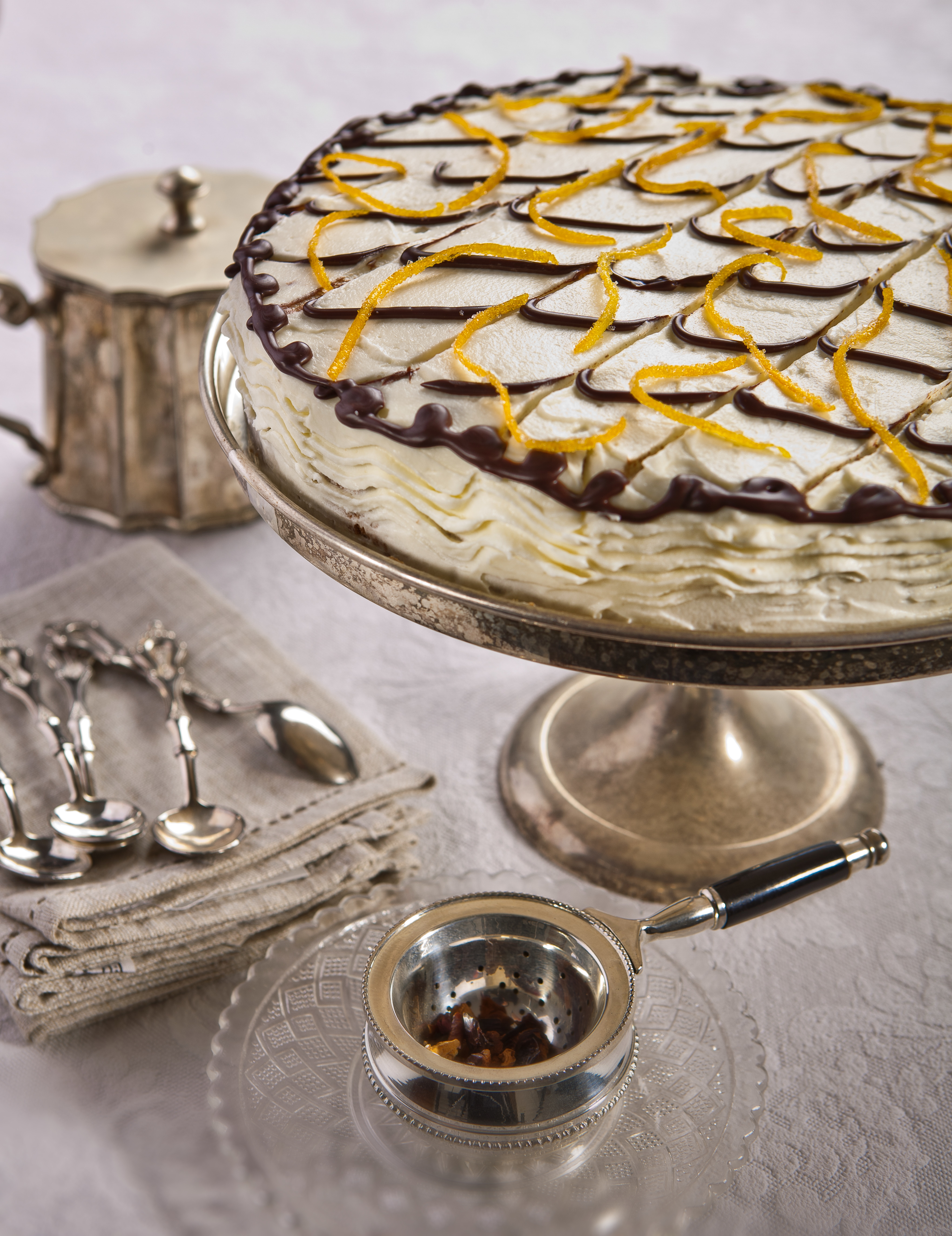 Orange nut cake (Credit: Anatoly Michaelo)
Use a 26 cm. springform pan.Ingredients:Dough:4 eggs, separated1 ¼ cups sugar½ cup walnuts, chopped1 ½ cups flour, sifted1 ¼ heaping tsp baking powder½ cup orange juice1 tbsp orange zest1 tsp lemon zest1 tsp vanilla extractCream:1 container (250 ml) sweet whipping cream3 tbsp powdered sugar1 package instant vanilla pudding1 cup milkIcing:100 g bittersweet chocolate, broken into squares1 tbsp chocolate liqueur1 tbsp oil1 tbsp water1 tbsp silanTopping:Chocolate swirls and sugared orange peels, chopped thinlyDirections:To prepare the dough, whip the egg whites with an electric mixer. When the egg whites have become fluffy, slowly add half of the sugar. Continue whipping until stiff peaks form and then transfer to another bowl. Add the egg yolks to the bowl of an electric mixer and whip on high speed. Gradually add the rest of the sugar and whip until light and fluffy. In a separate bowl, mix the nuts with the flour and baking powder and gradually add the egg yolk mixture. Fold in the juice, lemon and orange zest and the vanilla to the mixture and mix. Gradually fold in the egg white mixture into the egg yolk mixture. Pour into a greased pan and flatten. Bake in an oven that has been preheated to 180° for 45-50 minutes. To prepare the cream, whip all the ingredients with an electric mixer until smooth. Store in the fridge. To prepare the icing, add all of the ingredients to a small pot and cook over a low flame until it’s smooth. Ice the cake and then drizzle with chocolate. You can make lines with the chocolate and then use a toothpick to stretch the chocolate lines in opposite directions. Sprinkle with chocolate swirls and candied peels. Translated by Hannah Hochner. For more recipes, go to https://www.pascalpr.co.il/