Alongside the statuette in the predominantly ultra-Orthodox neighborhood hung a sign inciting against the inscription of haredi Jews into the army. 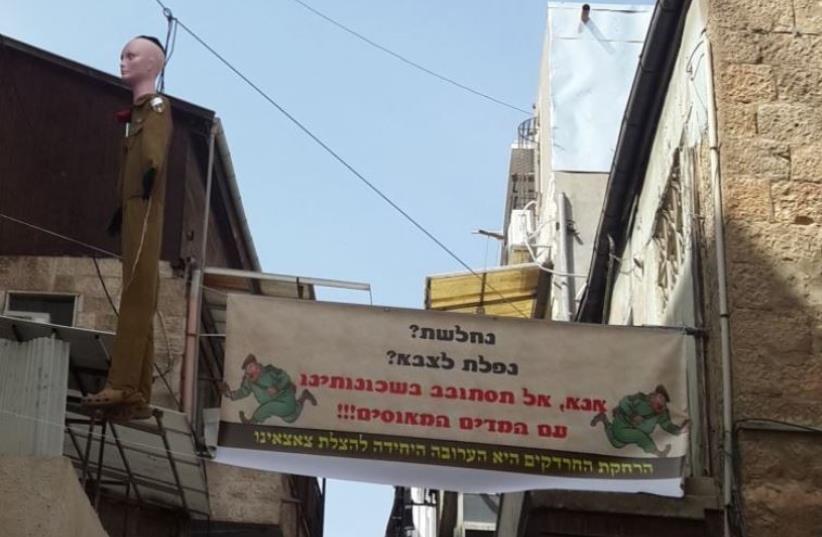 Effigy of IDF soldier found in Mea Shearim
(photo credit: Courtesy)
Advertisement
Extremists from Mea She’arim suspended an effigy of a haredi IDF soldier from a cable across one of the narrow streets of the neighborhood on Friday, Shushan Purim, the day on which Jerusalem celebrates the holiday.The effigy was given tzitzit and a black yarmulke to wear and was strung up next to a sign that warned ultra-Orthodox soldiers from entering the neighborhood.“Did you become weak? Did you fall into the army?” asked the sign. “Please do not come into our neighborhood with your repulsive uniform!” it read, with a declaration at the bottom saying that “banishing Hardakim is the only guarantee for saving our children.”Hardakim, a portmanteau meaning a weak-minded haredi person, is a disparaging term used in a vitriolic campaign run by extremists from the community against haredi men who enlist in the IDF.Police removed the effigy.In January, police arrested three anti-enlistment activists suspecting they broke personal privacy laws and insulted public servants.The activists last year incited against haredi soldiers and published booklets containing the addresses, phone numbers and other details of haredi IDF officers and others involved in haredi enlistment.The men whose contact details were printed in the booklets were subjected to numerous phone calls, in which they were harassed, cursed and threatened with violence.“We were on an organized tour as part of Purim celebrations in the neighborhood, suddenly we were amazed to see the shocking image of an IDF soldier wearing a costume uniform hanging from a power cord as if it was hanged,” a participant in a tour which came across the effigy told Maariv Hashavua.“At first we thought it was a soldier and only after a minute we regained our senses and realized that it was an effigy and a shocking representation [of a soldier],” he continued. “We were all horrified and our guide said that it was routine in this neighborhood.God help us if this is routine here.”In 2013, when the anti-enlistment campaign was at its height as a new haredi conscription law was being drafted, there was a wave of attacks against haredi soldiers in Mea She’arim. The next year saw more attacks in the neighborhood and in extremist haredi neighborhoods in Beit Shemesh as well.In April 2015, a national- religious IDF officer was attacked in Mea She’arim, where he was visiting two haredi soldiers under his command. Verbal abuse and harassment of haredi soldiers in uniform in haredi neighborhoods is common, senior officials in the campaign for haredi enlistment have said.