The protesters distributed fliers comparing Almoz to Hitler and military service to Auschwitz. 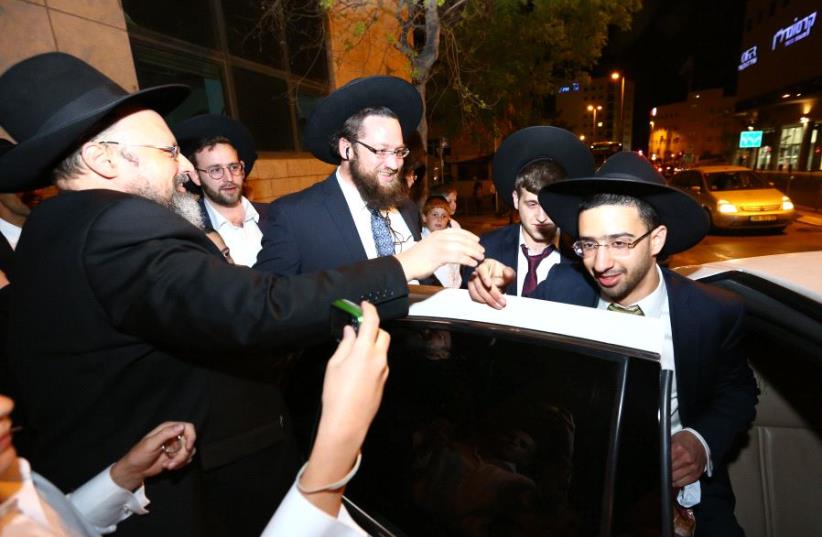 Haredi men celebrating IDF desertion.
(photo credit: SHLOMI COHEN)
Advertisement
An extremist haredi man was indicted by the Nazareth Magistrate’s Court on Thursday for attempting to attack the head of the IDF Manpower Directorate, Maj.-Gen. Moti Almoz, and issuing threats against him.According to the indictment, 40-year-old Moshe Iraam, a Jerusalem resident, traveled on May 5 to Moshav Kfar Tavor in the Lower Galilee, where Almoz lives, and accosted him outside the synagogue after the Friday night prayer service.Iraam spat at Almoz, and hurled abuse at him based on Iraam’s opposition to drafting haredi men into the IDF. He also accused Almoz of “torturing,” because of IDF regulations allowing for women soldiers to be put in military prison.Amongst other imprecations, Iraam told Almoz that “there is justice and there is a judge.”Iraam, together with another individual, stayed in Kfar Tavor for three days to harass Almoz close to the synagogue where he prays, and threatened violence against him.Later in May, several dozen haredi extremists descended on Almoz’s private residence and protested against the enlistment of haredi men, although the indictment did not mention Iraam in connection with these events.The demonstrators distributed flyers that read: “Moti Almoz, head of the Manpower Directorate, who sells his soul for money: How long will you burn the souls of the sons and daughters of Israel in the crematorium of Auschwitz – the army of destruction. Know that there is justice and there is a judge.Your end will be bitter, like Hitler’s and his friends.’” Over the past few years, haredi extremists have been conducting a fierce campaign of incitement and even aggression against haredi men who enlist in the IDF and against those who recruit them, a campaign which has increased in intensity in recent months.