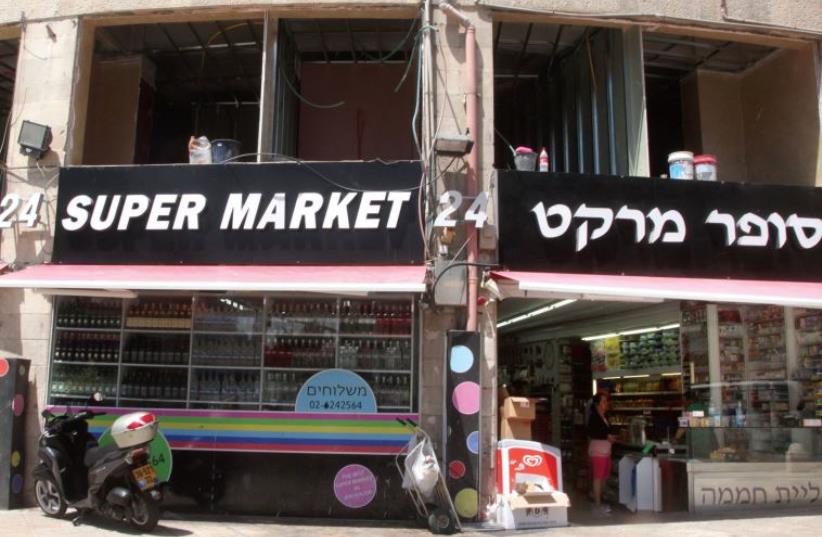 A grocery store that stays open on Shabbat, across from Mamilla Mall
(photo credit: MARC ISRAEL SELLEM/THE JERUSALEM POST)
Advertisement
With the Shabbat war in full battle mode, the three leaders of haredi (ultra-Orthodox) parties met with Prime Minister Benjamin Netanyahu on Thursday afternoon to lobby for legislation to prevent municipal authorities from increasing commercial activity on the day of rest.Following the meeting, United Torah Judaism chairman and Health Minister Ya’acov Litzman, Shas chairman and Interior Minister Arye Deri and senior UTJ MK Moshe Gafni that work on drafting a law to “protect the authority of the interior minister in everything relating to the approval of municipal bylaws would continue.”The legislation would reportedly invalidate municipal bylaws passed since 2014 that concern commerce and opening of stores on Shabbat, unless they receive the approval of the interior minister.The effort by UTJ and Shas followed last month’s ruling by the High Court of Justice that forced the government to allow implementation of a 2014 Tel Aviv bylaw increasing the number of grocery stores legally able to open on Shabbat.The proposed legislation, which is being spearheaded by Gafni, appears to be a direct effort to circumvent that ruling.In an interview with the haredi Kol Hai radio station after the meeting, Gafni said the three leaders threatened to topple the government over this issue and told the prime minister, “either there will be a law protecting the status quo [on religion and state] or there won’t be a government.”It is likely, however, that the legislation will be opposed, at least initially, by coalition partners Yisrael Beytenu and Kulanu.Kulanu MK Rachel Azaria told The Jerusalem Post on Thursday that the party would not allow passage of legislation that was deliberately engineered to circumvent High Court rulings.“Kulanu is not willing to agree to this legislation. It goes against the Supreme Court decision and we can’t have [a situation] when the Supreme Court issues a ruling and then legislation is written opposing the ruling,” said Azaria.Earlier this week, Kulanu chairman and Finance Minister Moshe Kahlon also said he would not allow a law to be passed which would specifically circumvent the High Court’s ruling.“There won’t be an overcoming clause in a Shabbat law and not on any other topic,” Kahlon told the Calcalist newspaper. “I’m in favor of preserving the status quo when it comes to Shabbat.”Earlier this year, he specifically refused to allow a clause to be included in the settlements regulations law that would have permitted the Amona outpost from being evacuated, since the High Court had ruled the outpost must be evacuated and destroyed.However, the current government last year did pass one law that circumvented the High Court, when it approved legislation that de facto banned the Reform and Masorti (Conservative) movements from using state-funded mikvaot, or ritual baths, after the court ruled that the practice was discriminatory and illegal.MK Robert Ilatov told the Post that his Yisrael Beytenu party welcomed the High Court ruling on Tel Aviv’s bylaw as “balanced” and in keeping with “the character of Tel Aviv,” did not believe there should be any intervention with the ruling, nor did it feel the status quo in the city should be changed.Ilatov conceded, however, that coalition politics had to be taken into account, although he would say not if Yisrael Beytenu would continue its opposition if the haredi parties demand passage of legislation in keeping with their coalition agreements.Despite Kahlon and Ilatov insisting that the status quo be preserved, the haredi parties see the High Court decision and the Tel Aviv municipal bylaw as a direct violation of the that agreement – which dates back to 1953 – since it allows greater commercial activity on Shabbat.