The Israeli Chief Rabbinate currently has a monopoly over the issuing of kashrut certificates, though a recent High Court ruling has opened the door to a shift in the status quo. 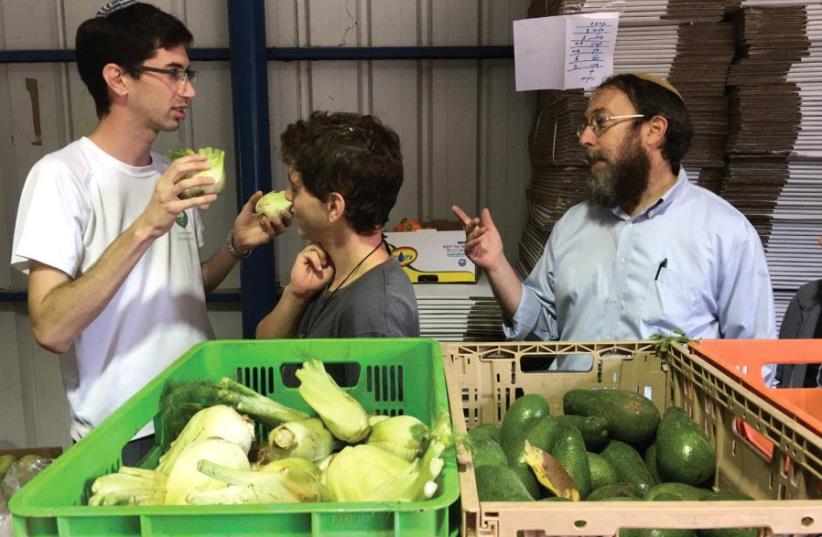 RABBI AHARON Leibowitz (right), one of the founders of ‘Hashgacha Pratit,’ is photographed on the job at the Kaima Farm in Beit Zeit alongside two young farm helpers.
(photo credit: Courtesy)
Advertisement
The independent, Orthodox kashrut authority Hashgacha Pratit has taken advantage of new legal rights it gained following a High Court of Justice decision earlier this month by issuing new kashrut certificates, which legally cannot be called kashrut certificates, to restaurants and other food businesses under its supervision.The ruling was hailed by Hashgacha Pratit and other activist groups as the end of the Chief Rabbinate’s monopoly over kosher supervision and the beginning of a new era of competition in the kosher market which, it is hoped, will raise standards.The High Court’s decision stated that although the Chief Rabbinate is still the only legally authorized body that can declare a product or business to be kosher in writing, restaurants can provide in writing a “true presentation” of the kashrut standards they keep, as long as they state they do not have a kashrut license.This gives broad scope to businesses that want alternative supervision than that of the Chief Rabbinate. That demand is frequently because of substandard and even corrupt practices in the Chief Rabbinate’s kashrut service, as underlined in a scathing State Comptroller’s report in May this year.Hashgacha Pratit’s new certificates now specify the exact kashrut practices which restaurants and businesses under its supervision observe.For dairy restaurants this includes stating that all products are dairy or pareve (without meat or milk); that the milk products are from supervised kosher milk; that flour is sifted for insects according to kashrut standards; and that leafy vegetables are correctly washed to remove insects, among other specifications.For restaurants serving meat, the certificates declare that all meat is from kosher slaughter.The certificates also bear a declaration that they are assisted by Hashgacha Pratit’s head of kashrut Rabbi Oren Duvdevani and his representatives in sourcing and preparing food.“The business has committed to making the kitchen, storeroom and any place in the business and its computer systems open to Rabbi Duvdevani and his team at any time they want, without prior arrangement for the purposes of oversight and inspection of the business,” reads the certificate.It also includes a declaration by Duvdevani that he has indeed inspected and approved the business and that his team will continue to inspect it on a regular basis.Hashgacha Pratit founder Rabbi Aharon Leibowitz said that the new legal status granted by the High Court ruling unshackles businesses from the Chief Rabbinate.“This is what the crumbling of a monopoly looks like,” said Leibowitz, although he added that full-market freedom in the field has yet to be realized. “A big sector of the public understands that long-term, quality kashrut according to Jewish law is possible only if there is competition.Traditional, religious, and haredi [ultra-Orthodox] people are coming to businesses with Hashgacha Pratit supervision who are saying ‘yes’ to kashrut, and ‘no’ to a monopoly.”