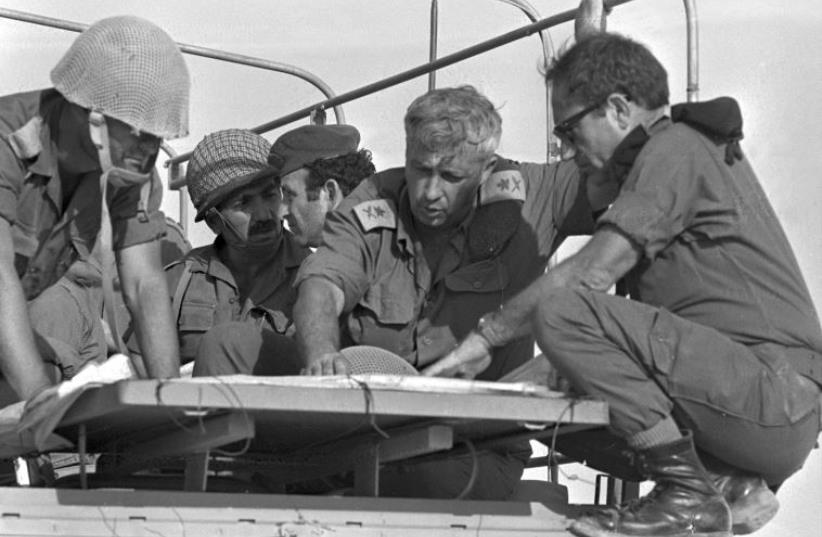 Ariel Sharon (2nd R) confers with comrades during the 1973 Yom Kippur War, October 10, 1973
(photo credit: REUTERS/SHLOMO ARAD/GPO)
Advertisement
General Ariel Sharon was guilty of “a long chain of dereliction of duty and discipline” on the southern front during the Yom Kippur War, according to allegations made by his commanding officer at the time, and first released for publication this week.The testimony of Maj.-Gen. Shmuel (“Gorodish”) Gonen appears in two letters he wrote to then IDF Chief of Staff Maj.-Gen. David “Dado” Elazar after the war, following multiple complaints about Sharon that Gonen made during the fighting to his superiors.Gonen’s letters recall two separate incidents in which he called for Elazar to remove Sharon from duty. In one of the incidents, on October 9, 1973, Sharon attacked the Egyptian front against clear orders, losing 20 tanks in the process, most of which were left in enemy territory.In Gonen’s November 13 letter to Elazar, he wrote that as the cease-fire appeared to be stable, “the timing is right to ask that you investigate the conduct of General Sharon and if my claims are proven, that he stand trial.”He added that failure to do so “after what happened, will cause demoralization and damage the character of the army.”Gonen accused Sharon of a series of charges, including failure to carry out his missions and orders in battle, refusal to follow orders, lack of adherence to objectives laid out by command, and bypassing the chain of command during battle, among others.In a letter written a week later to Elazar, Gonen detailed the events in question.Regarding the incident in which Sharon defied orders to stop the attack against Egyptian forces despite low chances of success, Gonen said that Sharon originally agreed to the orders, but Gonen, listening to radio communications, later heard that the attack was still ongoing.Gonen subsequently tried to call Sharon, but received no answer. He wrote that he then went to Sharon’s command post and told him to stop the attack, to which Sharon agreed, only to resume the attack after Gonen left.“In this battle we lost 20 tanks without achieving any sort of objective. Most of the lost tanks were left behind in enemy territory with their crews,” Gonen wrote.He added that on a later occasion, Sharon falsely stated that he had completed an objective necessary to establish a bridgehead on the canal, slowing down the completion of the task by 36-40 hours. He also said that Sharon refused an order on October 8 to send reinforcements northward to help an armored contingent led by Maj.-Gen. Avraham Adan.According to Gonen, the Sharon’s actions “without a doubt caused demoralization.”Though Sharon is remembered by most of the public as a hero of the 1973 war, Gonen was among those who received the brunt of the blame for the Israeli losses in the war. He was replaced in the first days of the war by former Chief of Staff Haim Bar- Lev. Furthermore, the Agranat Commission, launched to investigate the war, ruled that he failed to fulfill his duties and bore responsibility for the dire situation of many troops on the southern front.In 1974, Gonen resigned from the IDF and pursued a number of business interests in Africa, before dying of a heart attack in 1991.