On Tu Bishvat, Jews plant trees the government will uproot

Rabbinical students take a stand against demolitions in Umm al-Hiran 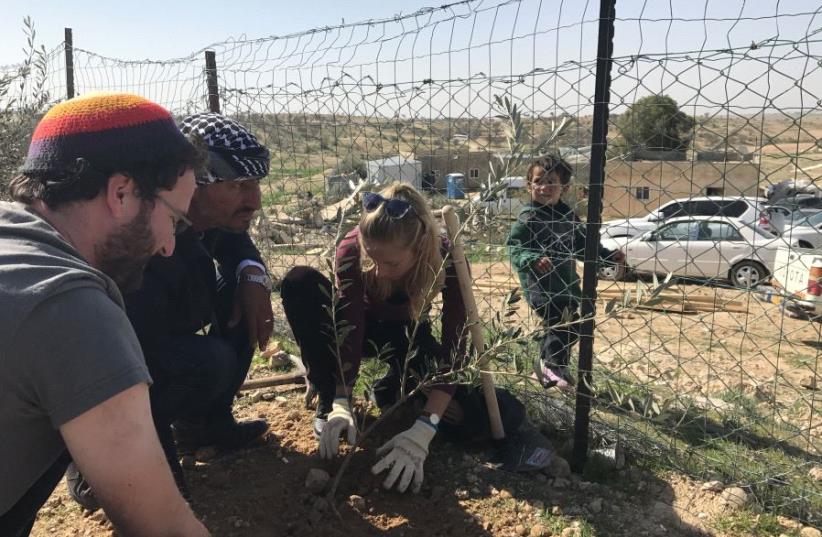 Jon Mitchell, 29, Raed Abu al-Kaeean, and an unnamed participant plant an olive tree sapling in the Beduin village of Umm-al-Hiran on Friday
(photo credit: ELIYAHU KAMISHER)
Advertisement
Pickaxes swinging, some 20 rabbinical students from the United States chipped away at the dry dirt surrounding the mosque in Umm al-Hiran, an unrecognized Beduin village slated for demolition by the Israeli government.The students came on Friday to celebrate Tu Bishvat, the Jewish “New Year of the Trees,” planting around 20 olive trees and protesting against housing demolitions in the community.“Trees are a symbol of your connection to a place,” said Jon Mitchell, 29, during a break from digging. “When we put trees down somewhere, we’ve made a statement about our relationship to that land. The longer the tree grows, the more durable that relationship becomes.” Umm al-Hiran witnessed violence last month when Yacoub Abu al-Kaeean, a 47-year-old Beduin man, was shot and killed by police when his car struck and killed 34-year-old police Sr.-St.-Sgt.-Maj. Erez Levi.The incident, which is currently under investigation by the Police Investigations Unit and the Shin Bet (Israel Security Agency), is being called a terrorist attack by the police and Public Security Minister Gilad Erdan. Multiple eyewitness accounts contradict police accounts, however, and a police videotape has cast doubt on the version of events as attested to by the police, showing that Kaeean’s vehicle accelerated only after it came under fire.Police were in Umm al-Hiran the day of the incident to carry out demolition orders because the town is slated to be replaced by a mostly Jewish village named Hiran.The olive trees planted on Friday likely will be flattened, together with every structure in the town of approximately 400 residents, if government plans are carried out.There is currently no sign that authorities will reverse their decision.The GPS application Waze already directs travelers to the village of Hiran in place of Umm al-Hiran, noting that it is “under construction.”"Even though these trees may fall, they express our solidarity and intentions to invest in the future,” said Itamar Haritan, the Israel Program Manager for Truah: the Rabbinic Call for Human Rights Year-in-Israel Program in partnership with Rabbis for Human Rights, which organized Friday's event. Activists from the Negev Recognition Forum and Orthodox peace organization Oz Veshalom – Netivot Shalom along with rabbinic students on the Year-in-Israel Program attended the tree planting.Most of the country’s Beduin, who live predominately in desert areas that account for two-thirds of Israel’s territory, are nomadic tribes who have wandered across the Middle East since biblical times. Arab citizens make up about 20% of the state’s population of eight million, and 200,000 of them are Beduin.Beduin leaders in the Negev say Israel has long discriminated against their communities, denying them public funds and services. Half of the Beduin population lives in towns and villages recognized as formal communities by the government, while others live in tents and shacks in the desert.“The uncertainty of what these trees will grow into reflects the uncertainty in Umm al-Hiran,” said Mitchell.“Planting the tree is saying, ‘Please do not uproot this,’ and, in a weird and beautiful way, trees may have more of an effect on another human to get them to stop and reflect than any [man-made] structures.”After planting the olive-tree saplings, the students gathered under a mourning tent where the Kaeean family was observing the death of the Yacoub’s father, Musa Abu al-Kaeean, who died last week at approximately 100 years of age. In the tent, they discussed the Jewish experience of displacement and how it relates to Umm al-Hiran.Over lunch, Jaber Abu al-Kaeean, Yacoub’s brother, petitioned the rabbinical students to harness their Jewish identity to advocate against Israeli government policies.“We wish Jews would prevent other Jews from causing problems,” said Jaber, who works as an inspector for the Education Ministry. “We have to be here together, not taking one and putting the other in a ghetto.It cannot be that [the government] will uproot Raed and in his place put Moshe. Our job now as Jews and Arabs is to come together,” he said.Reuters contributed to this report.