“As Jews, we can’t ignore what is happening here and celebrate our freedom at Passover when there are people who don’t have their own freedom in this country.” 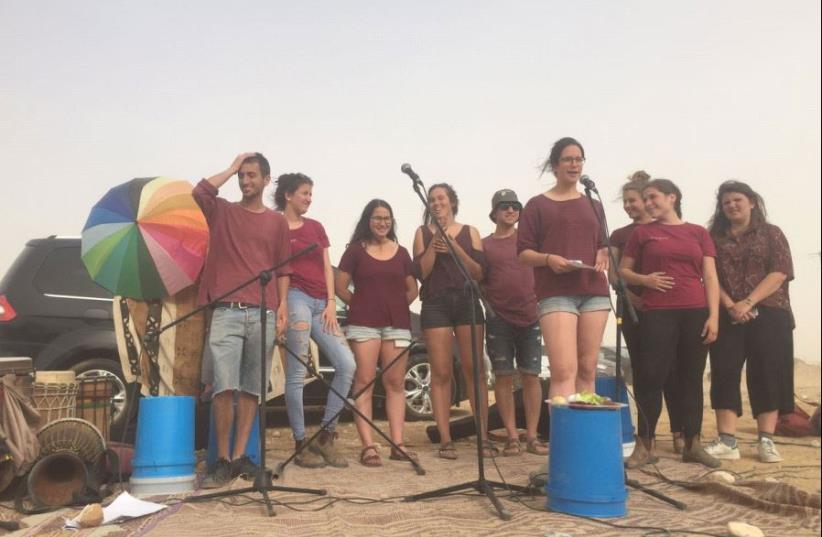 A Passover seder at Holot Detention Center.
(photo credit: NOAM COHEN NEHEMIAH)
Advertisement
Ahead of Passover, known as the time of freedom of the Jewish people, some 250 students from several pre-military academies journeyed down to the Holot detention facility in the Negev to hold a symbolic Passover Seder with asylum-seekers being held there.Students from the Academy in Jaffa – Telem in particular helped organize this year’s Seder together with the Rabbis for Human Rights, bringing several busloads of students from other pre-military academies, including the Bina academy in Ramat Gan, and the Be’er Ora academy 19 km. north of Eilat.Some 200 asylum-seekers detained in Holot, 2 km, from the Egyptian border, participated in the Seder outside the facility, in which a prayer service was conducted, as well as readings from the Haggada, joint singing sessions, and musical interludes.Dialogue groups were also held for detainees to relate how they reached Israel.Tamary Caspary, 18, was one of the organizers from the Telem academy and said that the motivation to hold the Seder stemmed from an earlier visit to the facility this year.This visit led the students to establish an organization, called “Head in the Sand,” to generate greater public awareness about the situation African asylum-seekers in Israel find themselves in.“As Jews, we can’t ignore what is happening here and celebrate our freedom at Passover when there are people who don’t have their own freedom in this country,” Caspary told The Jerusalem Post.“We want to show these people that we care about them, and give them some hope.”Caspary said that she understood concerns regarding the ability of the state to absorb the large numbers of migrants and asylum-seekers who were entering the country earlier this decade, but said that this issue was unrelated to their rights to claim refugee status.There are around 40,000 African migrants and asylum-seekers in the country, 20,000 of whom have submitted requests for asylum; the state has declined to process and examine these claims.The government has argued that many of the asylum-seekers are in fact economic migrants and not refugees, and has set up systems for voluntary deportation to third countries such as Uganda and Rwanda with a cash grant given to anyone who takes up this option.It has however not deported Eritreans and Sudanese, who make up the majority of the asylum-seekers in Israel, to their countries, to the poor human rights situation there.Caspary questioned the purpose of Holot, noting that it can hold a maximum of 3,300 detainees out of the total population of more than 40,000. Currently, the maximum length of time a detainee can be held in the facility is 12 months, although initially detainees could be held indefinitely. Residents are allowed to leave but are required to sign in three times a day and return for an evening curfew.According to the Hotline for Refugees and Migrants, there are 1,700 detainees in Holot, while some 10,000 Africans have passed through the facility.“We ourselves were refugees, and were in exile for 2,000 years. Now we finally have a place to live in freedom, but at the same time we have people here in this prison facility, so our call is that there should be freedom for everyone this Passover,” added Caspary.Hagos, a 33-year-old man from Eritrea, was one of the detainees to participate in Thursday’s Seder.Having fled Eritrea’s compulsory military service, which often lasts more than a decade and has been described by human rights groups as “perpetual bondage,” been imprisoned in Eritrea, and ejected from Egypt, he eventually made his way to Israel after paying Beduin traffickers in 2010.He lived in Petah Tikva and worked in the kitchen of an events hall in Kibbutz Einat, just outside Rosh Ha’ayin, until 2016 when he was summoned to Holot.“It’s been tough for me here, I don’t know why I need to be in this place, there’s no reason for it, but I understand I need to obey the law of the state,” said Hagos.“I very much respect the Jewish people, I don’t have bad feelings about Jewish people, but I also feel I have a legitimate request for asylum, which the state has not examined.”Hagos said he was not requesting citizenship but rather the right to live and work legally in the country until he can return to Eritrea.Regarding the Seder, he said he was appreciative of the efforts of those who came down to conduct it and spend time with them.“There are people who feel my pain, people who give me strength and are helping us get through this time. I’m very thankful.”