'Let us rededicate ourselves to the spirit of Entebbe,’ PM says on first day of Africa trip

“For centuries we were stateless and powerless to defend ourselves. No one came to our rescue, we were murdered by the millions. The rise of Israel has changed all that." 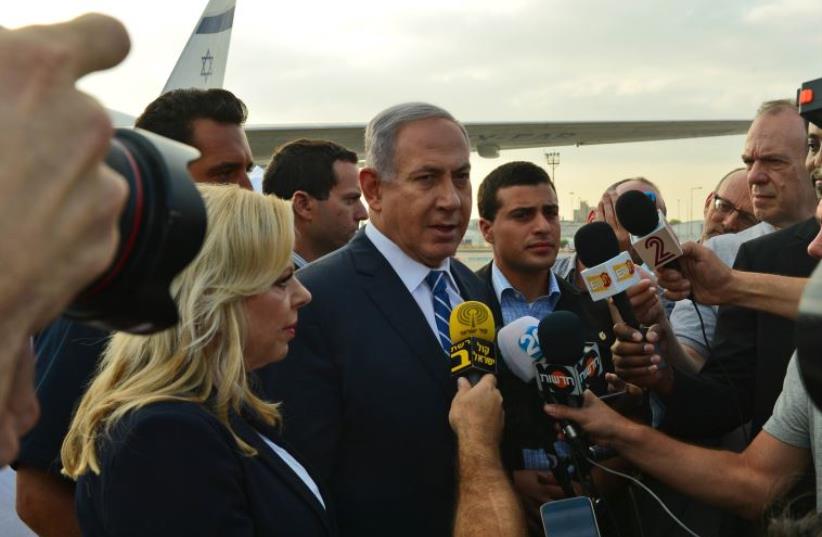 Netnyahu embarks on historic journey to Africa- July 4, 2016
(photo credit: PRIME MINISTER'S OFFICE)
Advertisement
ENTEBBE, Uganda - The Entebbe raid forty years ago shows that “good can prevail over evil, and hope can triumph over fear,” Prime Minister Benjamin Netanyahu declared Tuesday at the site where his brother, Yonatan, was killed leading Israeli commandos in a rescue operation he termed one of the most daring in history.."Entebbe was a watershed moment in the life of my people,” Netanyahu said. “For centuries we were stateless and powerless to defend ourselves. No one came to our rescue, we were murdered by the millions. The rise of Israel has changed all that. Time and again Israel has successfully defended itself against enemies committed to our destruction.”See the Jerusalem Post's full coverage of the 40th anniversary of the Entebbe raid:Entebbe thrust Benjamin Netanyahu onto trajectory leading to politicsAnalysis: The legacy of Entebbe - Israel's last heroic hurrah Watch: 40 years on, child hostages look back on Entebbe raidMilitary and political courage at EntebbeNetanyahu's words came in the shadow of the tower near the Old Terminal building, where a firefight ensued between the IDF soldiers – some, such as Zionist Union MK Omer Bar Lev, were in attendance – and Ugandan soldiers. Ugandan soldiers in full regalia watched over the ceremony..Uganda's President Yoweri Museveni made clear the reason why Ugandan soldiers were today guarding a ceremony marking the Israeli raid that killed Ugandan soldiers: he fought Ugandan dictator Idi Amin for six years before the Entebbe raid, and until the latter’s eventual fall and exile.With soaring rhetoric, Netanyahu said that the nighttime raid  not only changed Israel, but – with the loss of his brother – also altered his life. He said that his brother taught him two things regarding terrorism: that when dealing with it, clarity and courage is needed. “Clarity to differentiate good from evil, and courage to confront evil,” he said. He also said that the clarity is needed to realize that "nothing justifies the deliberate murder of the innocent,” and  “systematic slaughter.” And alongside clarity, he added, courage is also needed “to defend our values and our lives.“Today, in this place where free people delivered a devastating blow to forces of terror, we and all civilized nations must dedicate ourselves to the spirit of Entebbe, a spirit of daring and resolve, a spirit of courage and fortitude, a spirit as determined as ever to defeat terror and secure our common future.Netanyahu was followed to the podium by Ugandan President Yoweri Museveni, who in a rambling nearly 30 minute address, an address in which he repeatedly referred to Israel as Palestine, agreed with the prime minister that nothing justifies terrorism.Referring to his days as head of a movement that fought Amin and his supporters, he said that his forces “never used terrorist methods."Nations must fight for a just cause, he said, but use civilized methods in the fighting. “If a fighter has a just cause to fight for, he or she should distill the methods. Indiscriminate use of violence is criminal. Why target civilians? Even soldiers not harmed should not be attacked.”Museveni said that his forces used “violence to fight for the cause of Africa, but it was disciplined and purposeful, not indiscriminate.”It is possible to be a freedom fighter, without being a terrorist,” he said.The ceremony at the airport kicked off a five-day, four country trip to Africa for Netanyahu, the first visit to Sub Saharan Africa in nearly 30 years. Following the ceremony, Netanyahu met privately with the Ugandan prime minister and Uganda's president, and then held a “counter-terrorism summit” with the leaders of seven African states: Uganda, Kenya, Rwanda, Ethiopia, Zaire, Tanzania and South Sudan.“The historic summit testifies to the dramatic change taking place in the relations between Israel and Africa,” Netanyahu said. “Africa is a continent on the rise, and Israel looks forward to strengthening ties with all of its countries.”Netanyahu's visit, and the ceremony at the airport, is a huge logistical undertaking that included the prime minister's plane for his entourage, and an IDF plane -- that returned immediately after the ceremony --  to bring a delegation of soldiers involved in the Entebbe raid, as well as currently serving soldiers of the units who participated: Sayeret Matkal, the Paratroopers, Golani, Air Force and medical corps.Because of security concerns, a special armored limousine was flown over by a Hercules plane. Likewise, Israel brought over in another Hercules equipment for a new trauma center in the hospital where Dvor Bloch, one of the hostages separated from the rest before the raid because she choked on a chicken bone, was killed in an act of vengeance by Amin's forces.Accompanying Netanyahu on his plane were relatives of Bloch, and also the family members of the three other hostages killed in the raid: Ida Borochovitch, Pasco Cohen and Jean-Jacques Maimoni.Museveni thanked Netanyahu for timing the commemoration of this “sad story 40 years ago into yet another instrument of bonding the Holy Land – Israel/Palestine – with the heartland of Uganda in particular, and Africa in general.”After the ceremony, Idi Amin’s son -- Jafar -- approached and hugged both Bar Lev and Akiva Lakser, one of the hostages who recited a blessing at the ceremony for being saved in the raid. “Give us a chance to get to Israel,” he said.“We are all emotional today,” Bar Lev said.  Amin added, “I am moving to a point of closure.”  The younger Amin has over the years tried to rehabilitate his father’s image, and has recently expressed interest in being invited to Israel to apologize to the families of the victims of the raid.