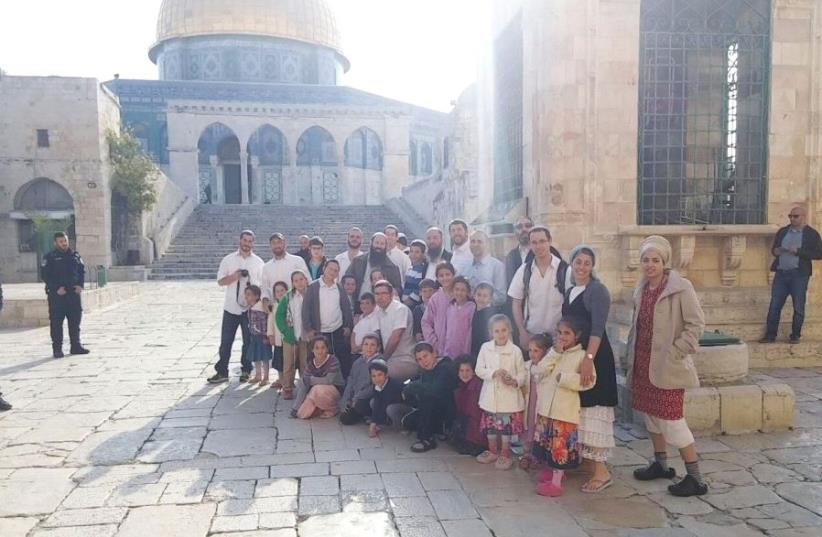 A GROUP of residents from Har Bracha south of Nablus in the West Bank visit the Temple Mount on Sunday
(photo credit: PESACH GOLDMAN)
Advertisement
A record number of Jews visited the Temple Mount over Passover, breaking the record for most Jewish visitors to the site in one day as well as over the course of Passover.Approximately 1,600 Jews visited the site throughout the seven days of Passover, compared to last year’s Passover record of 1,015, according to Yirah, an organization that encourages the presence of Jewish worshipers on the Temple Mount.The daily record for the number of Jews visiting the site was also broken on Sunday, with 495 Jewish visitors ascending to the Temple Mount, compared to the former record of 448 set last Succot.The record for the greatest number of Jews to visit the Temple Mount during a Jewish holiday was 1,611, also set last Succot.Passover, and the two other pilgrimage festivals of Shavuot and Succot, are seen as especially auspicious times to visit the Temple Mount to commemorate the commandment of visiting the site during these holidays.On Sunday, three Jews were detained by police on the Temple Mount on the charge that they “openly prayed” at the site, although all were subsequently released a short time afterward. In addition, police prevented eight youths from visiting the Mount due to classified information.The Supreme Court has upheld the theoretical right of Jews to pray at the Temple Mount, although it has stated that security forces are permitted to take security considerations into account when deciding whether to allow non-Muslim prayer there.In accordance with the so-called status quo arrangement at the site, non-Muslim prayer is de facto banned, due to the concern that permitting it will lead to Arab rioting and violence and a severe deterioration of the security situation.Access for Jews and other non-Muslims at the Temple Mount is strictly controlled, and police prohibit any non-Muslim prayer at the site as well as any outward demonstrations of religious worship, in accordance with the demands of the Jordanian Islamic trust, or Wakf, which administers the area.One group of note that ascended the Mount on Sunday included more than 70 men, women and children from the Har Bracha settlement in the West Bank, south of Nablus.Temple Mount activists seek to advance Jewish prayer and visitation rights at the site, and view the increase in number of visitors to the site as a tactic to gain political force and backing for such efforts.Palestinians and Jordanians fiercely oppose such moves, and claim that by doing so Israel is seeking to change the long-established status quo at the site.