Tropical fruits given to Rivlin at Tu Bishvat ceremony

The holiday begins on Friday evening. 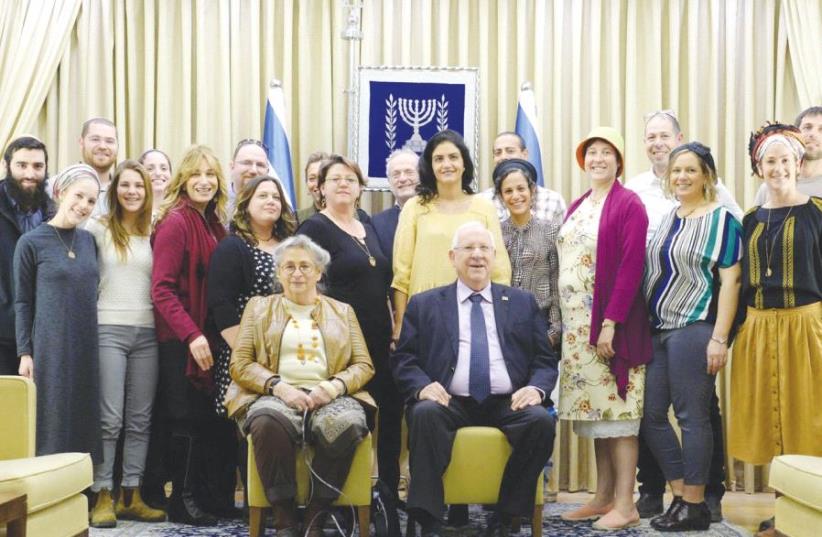 PRESIDENT REUVEN RIVLIN and his wife, Nechama, pose with members of the OneFamily community, whom they hosted at a Tu Bishvat Seder at his official residence in Jerusalem yesterday
(photo credit: MARK NEYMAN/GPO)
Advertisement
Buddha’s hand – or Buddha’s fingers (Etzbaot Buddha), as this palm-sized exotic fruit is called in Hebrew – was one of 15 tropical fruits brought in a basket from Kibbutz Ma’agan Michael and presented to President Reuven Rivlin and his wife, Nechama, on Wednesday in honor of Tu Bishvat, the New Year for Trees.The holiday begins on Friday evening.The colorful tropical fruits, some with a sweet-and-sour tang, were all interesting in shape, size, color and taste, but none excited as much interest as Buddha’s hand, with long, tapering “fingers” stretched out in different directions.There was also another basket of regular fruit – large, sweet and unblemished from another kibbutz.The Rivlins each exclaimed in delight when they saw the quality and variety of the fruit, especially Nechama Rivlin, who was raised on a moshav. Avraham Hassidim, who grows the tropical fruit, said proudly that he has more than 100 species, and the best time to come to see and taste them is in the summer.The fruit-growing farmers, who came from different parts of the country, also provided additional fruit for a Tu Bishvat Seder hosted by the Rivlins with the participation of the farmers and a representative group of victims of terrorism who are part of the OneFamily community founded in 2000 by Michal Belzberg, who forfeited her bat mitzva celebration in order to help victims of terrorism and was supported in this effort by her parents, Chantal and Marc, who have dedicated their lives to this cause. Since then they have helped hundreds of people who have lost parents, siblings, children and limbs to terrorism.The Tu Bishvat Seder, which is similar in some respects to the Passover Seder, had special symbolism in that part of the Seder service focuses on the Bible’s comparison of man and a tree. The actual Seder reading is the poem by famed Israeli poet Natan Zach “And man is like a tree in the field.”Rivlin also used this theme from the Book of Deuteronomy when addressing the victims of terrorism, telling them that when a tree is cut down or loses one or more of its branches, it grows back and flourishes. To add credence to those words, one of the women present had brought her baby. Acknowledging that the losses and the traumas that the OneFamily group had suffered were a constant open wound, Rivlin said that man had learned from the tree to grow and to renew himself, to dream and to move on, and even to bear fruit after the harm that had been caused by the severing of a branch.As for the farmers, some of whom were third and fourth-generation men and women of the land, Rivlin, in addressing them, said that in Israel “agriculture is not just a business; it’s a value, which must not be neglected.”He recalled that the Israel Fruit Growers Association had been founded in 1936 at the height of the Arab riots. He made the point that the successors of the founders were sitting around the Seder table in the hall. The Jews living in the Land of Israel at the time had to fight for their very existence, he said.Riding on the roads was dangerous because marauders were always lying in wait, ready to pounce. They shot at buses, broke into the fields and the orchards, uprooted trees and set fire to the crops. The farmers chose to rebuild and replant, and today Israel is an agricultural superpower which gives advice and shares agricultural know-how with countries whose agricultural output is meager.The farmers, while appreciative of Rivlin’s comments, asked him to tell his friends in the Knesset to be more respectful of them, to realize what an asset farmers are to the country, and to stop additional hardships created by increasing the cost of infrastructure and rezoning land intended for agriculture.Benny Kalman, from Kibbutz Bar’am near the Lebanese border, told Rivlin that his father used to work for the once iconic and now defunct ATA textile company that went out of business. “I hope that doesn’t happen to Israeli agriculture,” he said.Itzik Cohen, the CEO of the Fruit Growers Association, said that Israeli farmers had somehow managed to survive under the most difficult circumstances, but he could not say how much longer they could go on in this manner.