Women in Green have staged this march every year for the last 22 years. 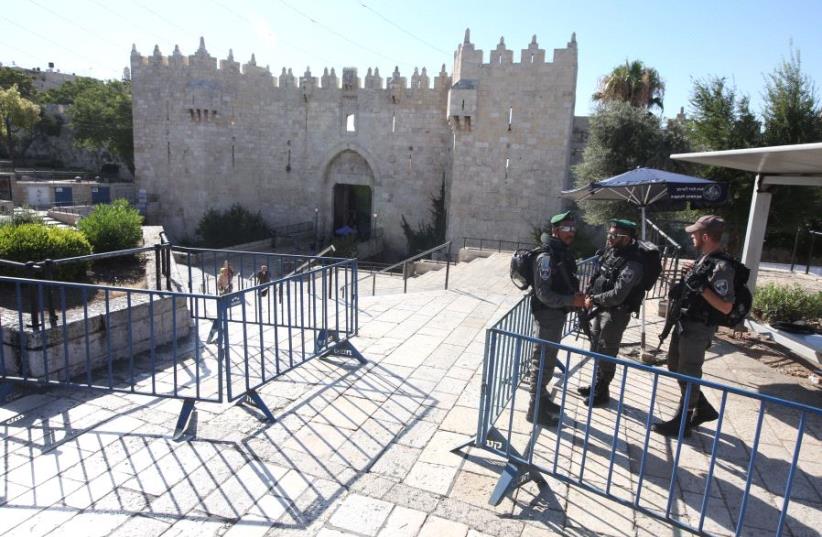 Damascus Gate
(photo credit: MARC ISRAEL SELLEM)
Advertisement
The Jerusalem Police have told the right-wing Women in Green organization that it may not be allowed to conduct its annual march around the walls of the Old City of Jerusalem on the eve of the Fast of the Ninth of Av due to volatile security situation surrounding the Temple Mount.Women in Green have staged this march every year for the last 22 years, but the police informed the group that it may have to change the route it uses on Monday evening, noting that “tensions, conflict and the security situation especially in the east of the city are at a peak.”Due to security considerations and concerns, the police have proposed that this year the march not include the path around the eastern part of the Old City through Arab neighborhoods in the vicinity.The organization has objected strongly to this idea however, saying that it would defeat the purpose of the event, and that should the normal route not be made available the entire march would be canceled.“This would take away the entire purpose of the walk which is to surround the walls of Jerusalem as an expression of the longing of the Jewish people for Jerusalem and the Temple Mount on the night of Tisha Be’av,” said Women in Green leaders Yehudit Katsover and Nadia Matar.“Women in Green views this announcement by the police as a surrender and a reward for terrorism. “For 23 years, the walk has been taking place unhindered, despite warnings and fears, and despite years of walking in the month of Ramadan, the walkers walk without any provocation or friction with the Arab population, and there is no reason to restrict the walk now.”The women said that changing the route would be “a reward for the rioters and murderers,” and the “punishment of the victims of terrorist attacks.”“It is precisely the time to act like every year and to prove that terrorism will not defeat the eternal people,” Katsover and Matar averred.Prominent attorney and dean of the Sha’arei Mishpat Academic Center, Aviad Hacohen sent a letter to the district commander Yoram Halevy, in which he argued that a ban on the march going around the Old City would contradict “basic principles of democratic governance” and the rule of law.He also said that blocking the traditional route of the march would be a “severe blow to freedom of expression, demonstration, assembly and procession.”The police have insisted however that they are responsible for the security of the general public, and said that such concerns were their only consideration, but emphasized that they would rather cooperate with Women in Green than take the decision by themselves.The police also stated that a firm decision is yet to be made, and if they do decide to change the traditional route they will offer alternatives.