Works on Negev Railway conclude, set to open to passengers in September

The Negev Railway, which is slated to open to passengers in September, is a double 70-km. track connecting Ashkelon and Beersheba. 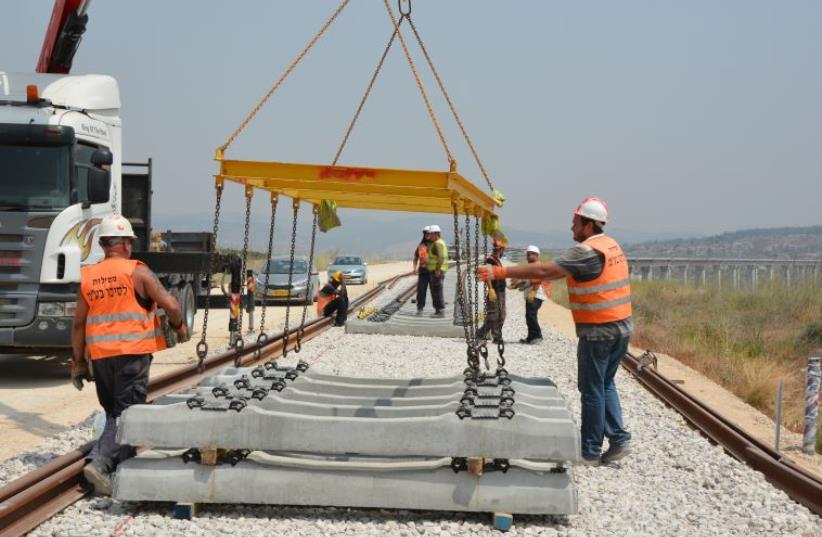 Negev Railway
(photo credit: COURTESY ISRAEL RAILWAYS)
Advertisement
Engineering works are complete on the Negev Railway, which will connect the southern coastal city of Ashkelon to Beersheba, Israel Railways announced on Monday.The Negev Railway, which is slated to open to passengers in September, is a double 70-km. track connecting Ashkelon and Beersheba, with stops along the way in Sderot, Netivot and Ofakim. The NIS 2 billion line will operating daily, with about 25 trains running in each direction, according to a statement from Israel Railways.“The Negev Railway is first and foremost a Zionist project,” said Boaz Tzafrir, CEO of Israel Railways. “The direct rail connection between Ashkelon and Beersheba, by way of Sderot, Netivot and Ofakim, will expand employment in the South, attract young couples and improve the quality of life for hundreds of thousands of residents of the South.Although the new route will begin running as of September, the Ofakim station will open only at the end of the year, because its construction was delayed by last summer’s Operation Protective Edge. The Sderot train station opened in December 2013, while the Netivot train station did so this February.“We are pleased to see the large passenger demand from Sderot and Netivot to the direction of the Center, and I am convinced that with the opening of the line to Beersheba, we will see another increase,” Tzafrir said.Israel Railways said freight trains will run on the tracks and drivers will be training to use the new route until it opens to passengers.In addition to laying tracks, the project has necessitated building 17 bridges, four story- separators, 11 agricultural crossings and an additional bridge to Road 40.As the construction of the Negev Railway drew to a close, Israel Railways also announced that its workers had achieved a significant milestone in building the high-speed train line from Tel Aviv to Jerusalem by beginning to lay tracks on the western portion of the route, in the Ayalon Valley. All in all, the high-speed rail project will cost about NIS 7b., and involve 56-km. of double track, five tunnels and eight bridges, the firm said.