The non-Orthodox Jewish movements still have a few options open for progress on prayer at Judaism's holiest site. 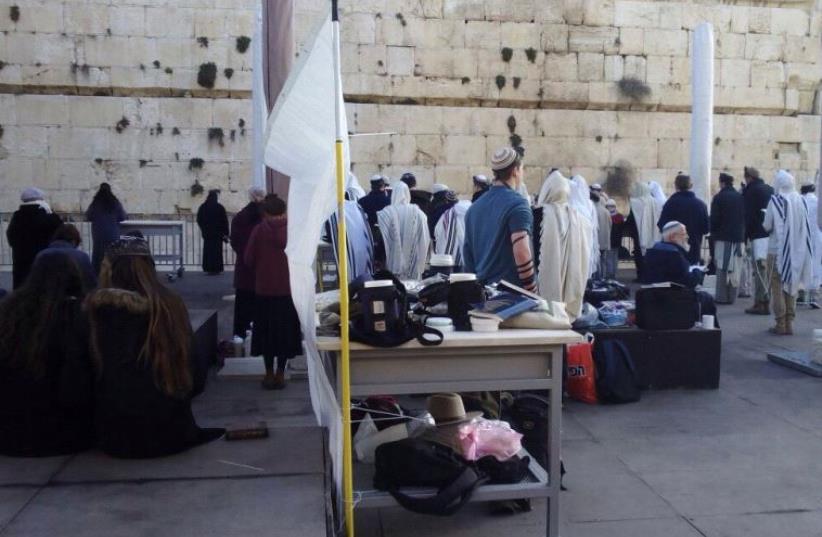 An impromptu Orthodox prayer service at the pluralist section of the Western Wall in Jerusalem.
(photo credit: YIZHAR HESS)
Advertisement
Diaspora Jewry was justified Monday to blast the government, after the slap in the face it received from Prime Minister Benjamin Netanyahu’s cabinet over its decision to freeze the 2016 Kotel deal – a deal that was supposed to have led to the establishment of an egalitarian prayer plaza at the holy site.Sunday, I wrote, will go down in history as a shameful day for the Jewish state, and will, sadly, lead to a greater divide between Israel and the Diaspora. Nevertheless, now is the time to consider how to move forward.Here are four ways:1) Focus on constructionThe main problem for the haredim (ultra-Orthodox) with the original Kotel deal from 2016 was that it included the establishment of a committee to be jointly chaired by officials from the Prime Minister’s Office and representatives of the different movements, primarily Reform and Conservative.The ultra-Orthodox could not live with the establishment of a committee that would have given the movements de facto legal recognition in Israel.Now, with the Kotel deal canceled – or “frozen” as the Prime Minister’s Office likes to say – this committee will not be established. While this is a blow for the movements, canceling the committee opens the door to construction of a larger and more respectable plaza for egalitarian prayer than the one that is currently at the southern section of the Western Wall.On Sunday, Netanyahu met with haredi party leaders and informed them that renovations will go ahead. According to one high-ranking official, construction will begin soon.While this is not what the movements ultimately envisioned, it would be a step in the right direction.2) Go to the High CourtPresident of the Union for Reform Judaism Rabbi Rick Jacobs hinted on Sunday that his movement will take the issue of the Kotel to the High Court of Justice. The battle there will be less about the establishment of a third prayer plaza and more about whether Women of the Wall can hold their services in the existing women’s section at the Kotel.Based on previous rulings, it seems like there is a good chance the court will side with the movements. There are two possible outcomes here. On one hand, Women of the Wall and the movements might win the right to have a third prayer plaza at the main section. On the other, if the renovations the Prime Minister’s Office is planning for the egalitarian plaza lead to a dramatic improvement, the court might rule that they should pray there instead.This is a gamble but might be the only move left for the movements.3) Wait The movements have tried to reach a deal with Netanyahu for the last five years, since the prime minister asked Jewish Agency Chairman Natan Sharansky to lead efforts to find a compromise at the Kotel. The movements could now decide to simply wait for a change in government and hope that haredi influence in a new coalition will be less than it is today.4) Education The Jewish Agency and the movements have very little support for their cause among Israelis.It is true that polls show that most Israelis support the establishment of a third prayer plaza at the Kotel, but they do not care enough to fight for it and make it an issue that they will consider in the next elections.Israelis don’t yet understand the practical implications of the government’s decision. They need to realize that there is a real possibility Diaspora Jews will cancel trips to Israel, retract donations to Israel and revoke membership in organizations like AIPAC. The Jerusalem Post has long warned that the continued haredi monopoly over religion and state in Israel and the suppression of progressive Judaism will lead to an even wider divide with Diaspora Jewry.Now is the time for the Jewish Agency to explain to Israelis why they need to care more about this issue and what effect it will have on Israel if American Jews move farther and farther away.