The mystery of the Kathisma: Jerusalem's unique Christian holy site that gets no visits

Here, according to tradition, the very pregnant Virgin Mary sat down to rest on her way by donkey from Nazareth to Bethlehem – where she gave birth to Jesus. 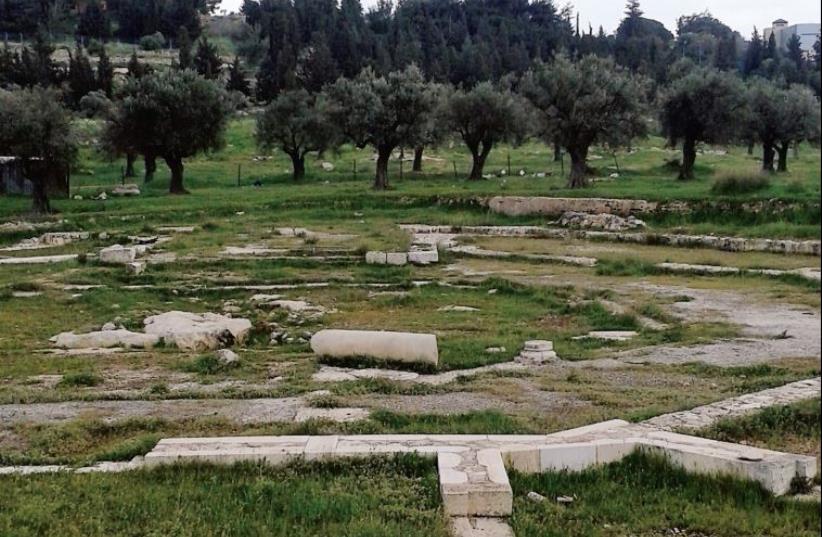 The ruins of the Kathisma today: The stone in the center of the octagon marks where Mary sat down to rest on her journey to Bethlehem
(photo credit: GIL ZOHAR)
Advertisement
"And Joseph also went up from Galilee... unto ...Bethlehem... with Mary his espoused wife, being great with child." – Luke 2: 4-5.Hidden in plain sight in an olive grove in southern Jerusalem by the side of the road to Bethlehem and Rachel’s Tomb are the ruins of a unique Christian holy site called the Kathisma – Greek meaning “seat.”Here, according to tradition, the very pregnant Virgin Mary sat down to rest on her way by donkey from Nazareth to Bethlehem – where she gave birth to Jesus in fulfillment of an interpretation of a biblical prophecy that the messiah will be born there (Micah 5:2).Extraordinarily, although it is one of the most sacred locales in Christianity and one of the largest Byzantine-era churches in the Holy Land, close to zero pilgrims today visit the ruins.Even more extraordinarily, archeologists believe the overlooked octagonal shrine and its decoration were the inspiration for the eight-sided Dome of the Rock.Why the absence of visitors to such an important if neglected site, which 1,500 years ago vied in importance with Jerusalem’s Church of the Holy Sepulchre and Bethlehem’s Church of the Nativity? Certainly due to Jerusalem’s wealth of riches for tourists to explore, the obscure Kathisma remains far down on their must-do list. The site’s importance is belied by the paucity of its ruins, which have been minimally restored. But seemingly the main reason for the mystery is that the site was discovered relatively recently, and word simply has not percolated down to tourists – or even to guides.The story begins in 1992 when Route 60, also called Hebron Road, was being widened. A bulldozer uncovered and damaged a mosaic floor, forcing the highway to be re-routed. After a five-month salvage dig by the Israel Antiquities Authority that uncovered the western section of the ancient church nearest the roadworks, the newly revealed mosaic floors were covered over to ensure their preservation.In 1997, during the laying of a pipeline to the new neighborhood of Har Homa, further damage was caused to the site, engendering a second emergency excavation. This was followed by a third season, headed by IAA archeologist Rina Avner. Only then was the site properly identified as the long-lost Kathisma, the only church in the Holy Land not dedicated to an event in the life of Jesus, but rather to his mother Mary.Avner recognized the building as a martyrium – a structure intended to bear witness to the Christian faith by commemorating an event in the life of Jesus, a martyr or some other holy person – in this case Mary, known in Greek as Theotokos (God-bearer).According to the sixth-century Life of Theodosius, the magnificent structure was erected around 456 CE by a rich widow named Iqilia. Avner identified an addition from the end of the sixth century when a second ring was built encircling the original inner octagon. In the eighth century, the building was converted into a mosque, although it seems have been used by both Christians and Muslims until it was destroyed shortly thereafter, presumably in the massive earthquake of 749 that rocked the country.The structure measured 52 x 43 meters.While Byzantine churches were typically built in the rectangular form of a basilica, the Kathisma has an unusual eight-sided plan surrounding the two-meter-wide flat protruding limestone rock on which tradition says Mary rested. This “seat” on the bedrock was the shrine’s focal point. Surrounding it were two octagonal hallways. The inner one served as an ambulatoria walkway from which the worshipers could view and circumnavigate Mary’s stone perch. The outer hallway was divided into a series of chapels.The church was covered with elaborate colorful mosaic floors in a variety of floral and geometric designs, some added in the eighth century.Both the grandeur of building and the sophistication of its mosaics made of tiny tesserae attest to the Kathisma’s importance. One of those multicolored mosaics (which is currently covered by sand for protection) is the source for the second half of the Kathisma mystery; it depicts three date palms. According to the fifth-century apocryphal Gospel of Pseudo-Matthew, a date palm miraculously bent over to offer Mary shade and fruit as she rested. That story also found its way into the Koran (Sura Maryam 19:22-26).The date-palm story and the Kathisma’s octagonal design inspired Omayyad Caliph Abd al-Malik when he built Jerusalem’s unusually shaped Dome of the Rock at the site of the destroyed Temple between 687 and 691. Under the Islamic shrine’s gilded copula is a depiction of the palm bending over. (Both the Dome of the Rock and al-Aksa mosque have been closed to non-Muslims since 2000.) Abd al-Malik built his octagon marginally wider than the Kathisma.After the Arab conquest in 637, while the site was serving as a joint church and mosque, a mihrab was added to indicate the direction of prayer toward Mecca.Restored by the Crusaders after they came to Jerusalem in 1099, the Kathisma was destroyed again in the 12th century, presumably after the Franks were expelled. Since then its location was forgotten.The site is owned by Jerusalem’s Greek Orthodox Patriarchate. In the 1990s volunteers came from the University of Athens to help with the dig and begin the restoration. But with Greece mired in a deep financial crisis, the plans to bring back the Kathisma to its glory days – when it was one of the most important pilgrimage stops in Jerusalem – remain frozen.
Sign up for our Christian World newsletter >>