Be prepared to bury the two-state solution, Palestinian FM warns

Riad Malki tells UNSC it was a mistake to wait to take action. 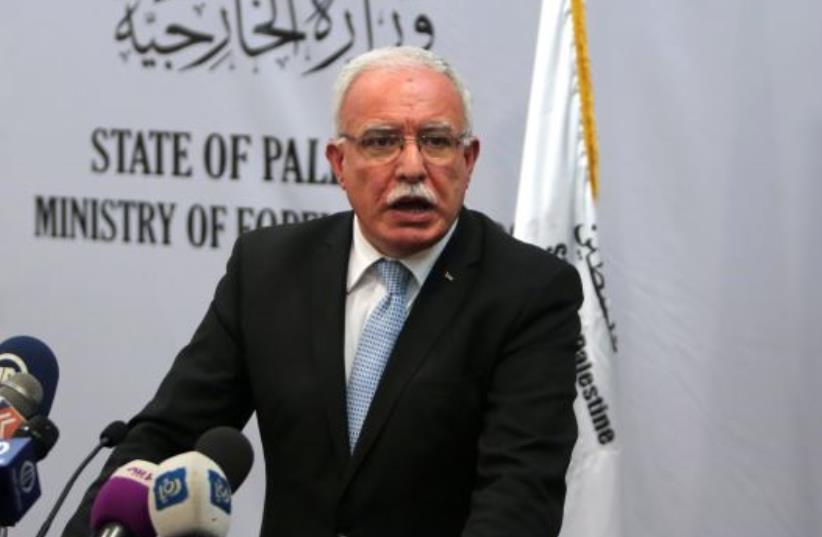 Prepare to eulogize the two-state resolution to the Israeli-Palestinian conflict, Palestinian Authority Foreign Minister Riad Malki warned on Wednesday, as he called on the international community to force Israel to withdraw to the pre-1967 lines.

“There is urgency because this conflict has a solution that may still be available today and that will no longer be viable tomorrow,” Malki told the UN Security Council during its monthly meeting on the conflict. “The two-State solution... does not need you by its bedside to share comforting words. It needs you to save it. Absent this sense of urgency, prepare yourself to attend the funeral of this solution with all the consequences of such a death for the lives of millions of people, Palestinians and others.”

Malki spoke in the midst of a prolonged absence of any peace process to resolve the conflict.

Malki told the UNSC that it was a mistake to wait to take any action, as if time would allow for the issue to resolve itself.

“Can anyone seriously argue that we should wait for Israel to be ready to end its occupation on its own, to wake up one day wiser and decide to redeem itself?” he asked. “Is there anyone around this table who believes this is a rational or winning strategy?”

Israelis and Palestinians did not attend the Madrid Conference in 1991 because they wanted to, Malki explained, they went because they felt like they had no choice.

If former prime minister Yitzhak Shamir had his druthers, the conference would never have occurred, Malki said.

Thirty years later, that same kind of pressure must be applied to force Israel to engage in an internationalized peace process, he said.

Malki also called for the UNSC to visit the West Bank to view the situation for themselves.

Should the status quo continue, he said, the only thing that would happen is that those living between the Mediterranean Sea and the Jordan River would have to choose between two different forms of a one-state solution. The options would only be between an apartheid state and a state for all of its citizens, he added.

“Will you accept this apartheid in the 21st century or will you convert to advocates of the one-state solution of freedom and equal rights for all between the river and the sea?” Malki said. “These would be the only options available then.”

“We must steer the situation onto a better path,” she said.

To underscore the urgency of resolving the conflict, Huitfeldt had called for high-level representation at the meeting, but the only two countries to send foreign ministers were Ghana and the PA.

Russia called for talks to be held under the auspices of the Quartet, composed of the UN, the European Union, Russia and the United States.

The PA disavowed the US as a broker during the Trump administration when it severed ties with Washington. It has restored ties with the Biden administration but has not sought to lead negotiations. President Joe Biden has held onto his country’s propriety role with regard to the conflict but has not put forward a peace initiative.