Hundreds of Israeli and Palestinian women met by the Dead Sea on Friday to encourage their leaders to launch negotiations toward a political agreement ensuring a future of freedom, peace and security for both peoples.

The Israeli women were represented by Women Wage Peace, the largest grassroots movement in Israel with 50,000 registered members. The movement was granted special consultative status to the United Nations and works to promote political solutions with the Palestinians.

The Palestinian women were represented by a movement called Women of the Sun, founded last July. Its members come from different parts of the West Bank, east Jerusalem and the Gaza Strip.

They met at Neve Midbar Beach, at the northern end of the Dead Sea.

Over the past few months, the Israeli and Palestinian women have held a series of meetings and formulated a “joint platform,” which reflects the sensitivities on both sides and respects their needs, challenges and capabilities. 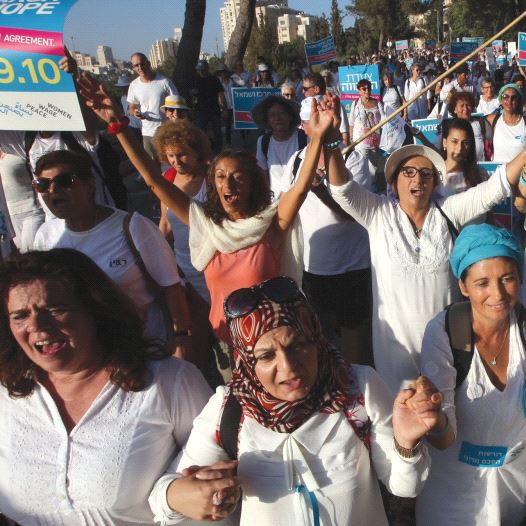 The two movements say that they are not affiliated with any particular political party.

“We believe that the majority of the people of our nations share our mutual desire. Therefore, we demand that our leaders listen to our call and promptly begin peace talks and negotiations, with resolute commitment to achieving a political solution to the long and painful conflict, within a limited time frame,” the women proclaimed in their platform.

“We are calling on the peoples of both nations – Palestinian and Israeli, and peoples of the region – to join our call and demonstrate their support for the resolution of the conflict,” they wrote. “We are calling on our leaders to show courage and vision in order to bring about this historic change, to which we all aspire. We join hands with determination and partnership to bring back hope to our peoples.”

Over the next year and a half, the Israeli and Palestinian female activists are planning to hold a series of joint activities to demonstrate the strength of both movements.

“We hope that this partnership between Women of the Sun and Women Wage Peace will be the first step toward a just peace and security to put an end to war and destruction. We want to live respectfully and peacefully,” said Aaisha Faras, one of the founders and leaders of Women of the Sun.

“Today no less than a historic event took place. It began with a small group of courageous Palestinian women, who in a short time succeeded in enlisting over 1,000 supporters. Young women and older women who, together with us, decided to stop being silent and to create another path,” Yael Admi, one of the founders and leaders of Women Wage Peace said, summing up the event.

“The time has come for a courageous leadership to create a reality of peace and a different future for our children.”