Hamas claimed that its naval commandos were attacked by a dolphin operative of the Israeli forces, equipped with specialized combat gear. 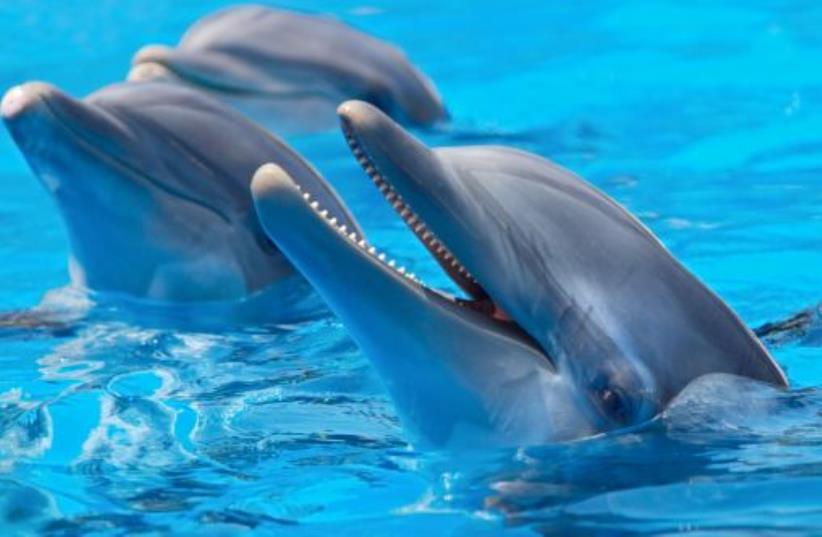 Israeli security forces used a dolphin to chase Hamas frogman commandos off the coast of the Gaza Strip, the terrorist organization claimed on Monday, according to a report by Al-Quds.

During an operation that occurred at an unstated time, Hamas naval operatives were chased into the sea by a dolphin equipped with a device capable of killing the terrorist group's frogmen, an Al-Qassam brigades naval commandos spokesperson revealed in a video.

"Killer Zionist dolphins exist, according to a  Hamas publication," tweeted Joe Truzman, research analyst at the Foundation for Defense of Democracies’ Long War Journal. "Abu Hamza explains that a member of Hamas' Frogman unit who was killed by Israel during the May conflict found the killer dolphin. The device the alleged killer dolphin was wearing is shown in the publication."

Killer Zionist dolphins exist, according to a Hamas publication. Abu Hamza explains that a member of Hamas' Frogman unit who was killed by Israel during the May conflict found the killer dolphin. The device the alleged killer dolphin was wearing is shown in the publication. pic.twitter.com/gvAyynO3YT

The exact nature and function of the aquatic attacker's device were not revealed, but Al-Quds claimed it had sources regarding another combat cetacean incident in August 2015 that was equipped with a remote control, a camera and a weapon that could fire harpoon-like projectiles.

The Al-Quds sources claimed that Hamas had succeeded in capturing the 2015 Israeli dolphin operative, but did not report what became of the military mereswine, which may still be in captivity. According to BBC, The newspaper claimed that the marine mammal was "stripped of its will" and turned into "a murderer" by Israeli forces.

Past reports of killer Israeli dolphins and other militarized marine animals have become memetic on social media –as demonstrated by the tagline of the popular satirical Mossad Twitter account: "We put lasers on aquatic animals and other satirical shenanigans."

Hamas's newest claim of Israel dolphin forces was widely met with ridicule online. Some Twitter users questioned if the dolphin had laser weapons attached, in reference to villians in the comedy film Austin Powers who demand to have sharks with lasers attached to their heads.

Israel has in the past been accused of using other weaponized animals for militarized purposes. In 2010, Egypt's South Sinai Gov. Mohamed Abdel Fadil Shousha suggested that deadly shark attacks in Sharm el-Sheikh were part of a Mossad operation to harm Egyptian tourism. In 2011, Saudi Arabian authorities held a vulture in detention under suspicion that it was spying for Israel after a misunderstanding about the purpose of the tracking device it was carrying. Turkish authorities also detained a suspected Israeli spy bird in 2013, but released it after X-rays showed that it was not embedded with surveillance equipment.

Iran was also alleged by the Mirror tabloid to have been using killer dolphins equipped with harpoons strapped to their heads.

Marine animals have a long history of military use, though usually for surveillance and equipment retrieval, not aquatic assassinations as Hamas claimed it was trying to evade.

Russia has been reported by the Guardian as suspected of using beluga whales for possible surveillance purposes. According to National Geographic, the US Navy has had a marine animals program since the '60s. PBS reported that bottle nose dolphins are used to detect sea mines and swimmers entering territorial waters, and California sea lions are used to aid in Explosive Ordnance Disposal (EOD) practice. There have been reports of a Vietnam War-era "swimmer nullification program" used to tag swimmers, but the US Navy denies that dolphins have ever been used to attack people.