The hot dog stand mistakenly had a "vegan" sticker affixed to it, angering vegans across Israel. 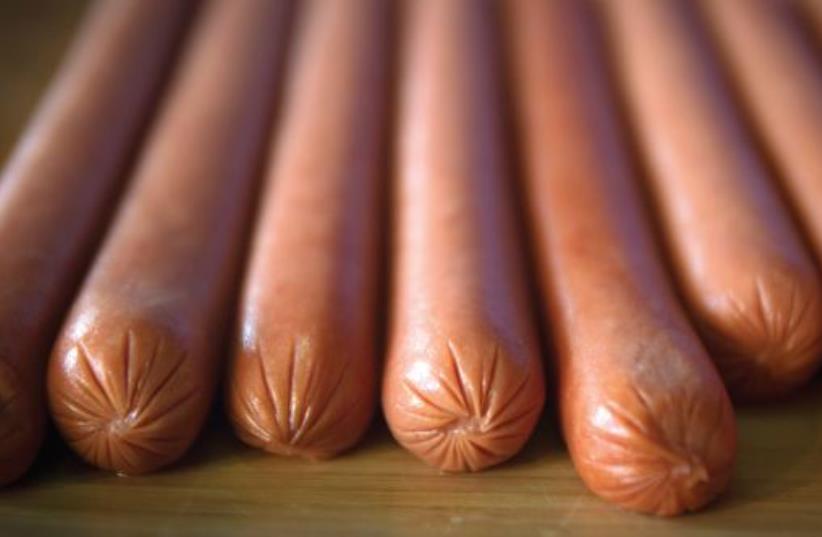 A Hannukah event that took place at the Shlomo Group Arena last weekend in Tel Aviv featured a “vegan” hot dog stand that was, in fact, serving hot dogs made with from chicken.

The hot dog stand, which was marked as vegan with a sticker from Israel’s Vegan-Friendly Association, is part of Shlomo Group’s sponsorship agreement with the Hapoel Tel Aviv basketball team, which plays in the arena, and the company that operates the cafeterias.

Religious scholar and advocate for veganism Asa Keisar documented the incident on his Facebook page, thus informing vegans around the country of the massive oversight on Saturday.

“Today at the Shlomo Hall in Tel Aviv while thousands of people were present, chicken sausages were sold under the label that the sausages were vegan,” wrote the veganism advocate, who frequently links veganism and Judaism in his lectures.

Public backlash for the mixup

While some commenters on Kesiar's Facebook post asked for evidence that the sausages were indeed not vegan, others immediately blasted the facility for the violation of food safety and public trust. "Worth a lawsuit without a doubt," one commenter opined, while another chimed in that it should be "a lawsuit closes the place for the crooks."

Some blasted the Vegan-Friendly Association itself, with one commenter adding "We should come with complaints to Vegan-Friendly, they are supposed to check the operator."

Other commenters on Keisar’s post, which now exceeds 100 comments, called it humiliating, upsetting and criminal, while others questioned why they would trust any food vendor after such an incident.

“A vegan stand was accidentally used during an event, even though no vegan hot dogs were sold there. The hot dog stand in question was taken out of use during the event, and then cleaned and disinfected,” said the New Bar Company, which operates the hot dog stand, in a statement. “We apologize for this, and corrective action, including renewed training for all service teams, was taken." The New Bar Company spokesperson further clarified that the company will "continue the fruitful cooperation with the 'Vegan Friendly' association at the Hapoel Tel Aviv basketball games.”

“Since the beginning of the cooperation in August, there have been no failures on the subject. On the contrary – we have seen a steady increase in demand for vegan hot dogs at the games,” the Vegan-Friendly Association said in a statement.

"We were surprised to find that in an event unrelated to Hapoel Tel Aviv, a machine for making meat sausages was used, without our knowledge and contrary to the agreement. We take the case seriously and are working tirelessly to prevent another case,” the Vegan-Friendly Association continued. “We reported the case to the New Bar company, which operates the cafeteria, as soon as we received the photo, and the company quickly clarified that this was a human error and not a common practice.”

"The Vegan-Friendly association is proud of its cooperation with Hapoel Tel Aviv, which exposes hundreds of thousands of sports fans to the benefits of a vegan diet and caused thousands to experiment for the first time with meat and cheese substitutes. The project is one of the dozens of projects that the association has released in recent years that shaped public awareness in Israel and, among other things, promoted the country to a leader in the field of veganism in the world," the Vegan-Friendly Association concluded.