Did a pharaoh's curse cause Suez Canal crisis, other Egyptian disasters?

Many had feared a supernatural cause for many of Egypt's woes, having tied it to plans by Egypt's Tourism and Antiquities Ministry moving of 22 royal mummies to a new permanent exhibit. 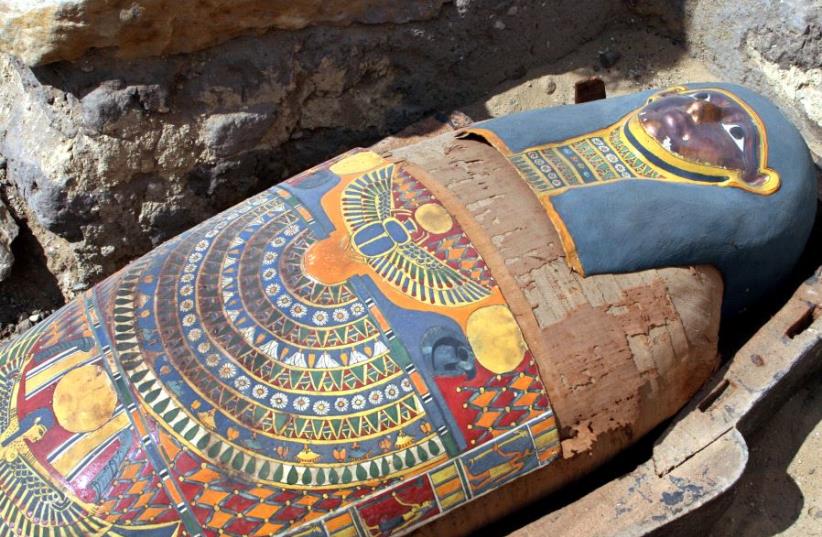 A 2,300-year old mummy is displayed after it was found by the Sakkara pyramids south of Cairo, May 3, 2005
(photo credit: REUTERS)
Advertisement
Have the recent series of disasters that have befallen Egypt been the result of an ancient pharaoh's curse?
According to several archaeologists, this is a definite "no," multiple Middle Eastern sources reported Monday.
Many had feared a supernatural cause for many of Egypt's woes, having tied it to plans by Egypt's Tourism and Antiquities Ministry moving of 22 royal mummies to a new permanent exhibit in the National Museum of Egyptian Civilization out of their current home in Tahrir's Egyptian Museum.
The mummies – which include such notable former pharaohs as Ramesses II, Thutmose III, Seti I and the queen Hatshepsut – are set to be moved as part of a government effort to use archaeological and cultural activities to develop and modernize Cairo and other cities around the country, Arab News reported.
These plans are set to take place on April 3. However, in recent weeks, the North African country has suffered a bewildering number of disasters that are equal parts strange and devastating. These include the collapsing of a massive 10-storey structure in Suez Bridge and a concrete pillar on a still-under-construction bridge in Mariotia; multiple fires in Minya, the Zagazig railway station and the Maadi tower, and a fatal train collision in the Sohag Governorate on March 26, according to Arab News.
Some of these disasters had cost lives, with the collapsed building reportedly killing 23 people, according to Gulf News, and the train collision resulting in 19 deaths and 185 injuries.
But one other notable incident stands out from the rest: The gigantic cargo ship Ever Given accidentally getting stuck in the Suez Canal, blocking the vital waterway and bringing global trade to a grinding halt. Some estimated this disaster had resulted in a global loss of $400 million an hour (and costing the canal itself $14-$15 million a day) before the situation was finally resolved on Monday, nearly a week later.
It should be noted that while the timing of these disasters seemed suspicious due to them all happening at once, they can still be explained. For instance, the train collision is likely the result of the numerous problems that plague Egypt's railway system. In fact, Egyptian Prime Minister Mustafa Madbouly admitted that the railway system in the country "has been neglected for decades to an extent that made it quite outdated and extremely dangerous," and the country has a long history of train accidents as a result, with 2017 alone having had 1,793 train accidents, according to German daily Deutsche Welle.
As for the Suez Canal incident, there are many factors that were at play. For one, official reports at the time of the incident had credited high winds and sand for blocking visibility, which led to the disaster. In addition, later reports emerged citing the possibility of human error, with many in the industry unsurprised due to both the overall fatigue and over exhaustion of ship crews in recent years due to busy schedules and for many complaints people have had regarding the pilots at the Suez Canal. And a third factor is the sheer size of the ship, with the Ever Given being one of the largest ships in the world.
But regardless, many on social media had credited the curse of ancient Egyptian pharaohs, quoting a warning that "death will come on quick wings for those who disturb the king's peace," Arab News reported.
The idea of a mummy's curse is nothing new, and the legend of the supernatural disastrous fate that would befall graverobbers is well engrained in pop culture. Many examples of actual curses - or rather, the warnings of curses - were put in place either inside or on the façade of a tomb of the ancient Egyptian kings, though some scholars have suggested they were not meant to keep away grave robbers so much as encourage the clergy to properly maintain the tomb.
And considering the statuses of some of these mummies - Ramesses II in particular is widely considered by many to have been the greatest, most celebrated and most powerful pharaoh in all of Ancient Egypt – it isn't surprising that many would feel curses were left in place on their tombs.
But several experts have been quick to quash such worries.
“The occurrence of these accidents is just fate and there is no connection between them and the mummies at all,” said former Egyptian antiquities minister Zahi Hawass, who himself had actually supervised the discovery of several ancient Egyptian tombs and had emerged unscathed, Arab News reported.
This was supported by Egyptian historian Bassam el-Shammaa, who discredited both the link between the accident and the curse as well as the entire concept of pharaonic curses.
It should be noted, though, that the idea of a terrible fate befalling those who disturb the tombs of Egyptian kings is far from unfounded, and has nothing to do with the warnings of curses. Though rather than bad luck and financial disaster, the terrible fate was due to illness, typically in the respiratory system.
Ancient Egyptian tombs often had a number of significant health hazards. According to Shammaa, these included problems with the mummy itself – such as mold causing the tomb walls to be covered in bacteria that could fatally attack the respiratory system, or ammonia gas leaking from the coffins that could cause pneumonia – and with the environment of the tomb itself – with bat excrement possibly carrying fungus that could cause flu-like sicknesses, Arab News reported.
In a television interview with Al-Nahar, Hawass backed up these statements, and further added that the claims of a curse were especially nonsensical because "the relocation of the mummies will honor them as they will be put in a place becoming of them and their history," adding "The eyes of the whole world will be fixed on Egypt amid great respect during the transport of the mummies that will take 40 minutes."