Passover: Hametz on IDF bases is a threat to Jewish Israel - opinion

If the Supreme Court cannot be counted on to defend the Jewish character of Israel, it will put itself into firm opposition with their own citizenry.

By DOUGLAS ALTABEF
A SOLDIER is armed with his weapon and matzah and glass of wine for Passover.
(photo credit: EDI ISRAEL/FLASH90)
Advertisement

In the never-ending series of attempts to undermine a Jewish Israel in favor of a state of its citizens, the latest involves an appeal to the Supreme Court that hametz (leavened products) should be allowed on IDF bases during Pesach, just as it recently ordered it to be allowed to bring into hospitals.

Undoubtedly, this will be portrayed as a human rights issue, involving free choice. And, of course, the petitioners are appealing to a receptive source with a court that has shown little interest in prioritizing the Jewish character of the state.

This issue, together with the bringing of hametz into hospitals, was the straw that broke the camel’s back for coalition leader Idit Silman in her dramatic decision to leave the governing coalition.

Bringing hametz into army bases is even a bigger self-inflicted wound then allowing it in hospitals. Unlike in hospitals, the overwhelming majority population of bases is Jewish. And the core of the Army is increasingly the religious and traditional sectors who are not seeking to avoid service, but rather understand the great significance of standing up to serve their country.

The country that they seek to serve is a Jewish country, one that represents the miraculous return of the Jewish people to its homeland with sovereignty. Does anyone believe for a second that the same spirit of service and sacrifice would apply to these soldiers serving a state that resembled Denmark or Belgium, one where being Jewish was merely a lifestyle choice? 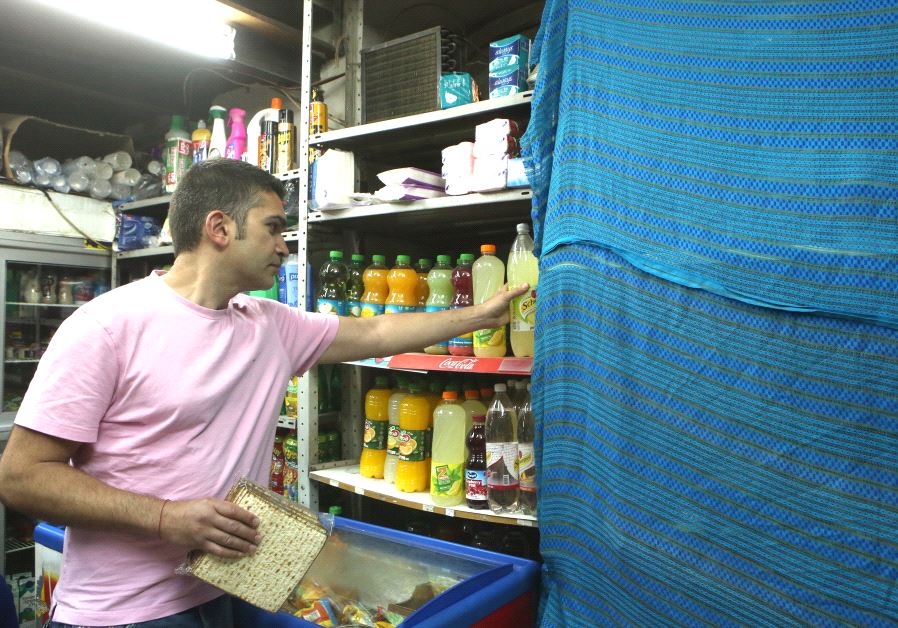 Hametz is covered at a store in Israel (credit: MARC ISRAEL SELLEM)

In other words, the issue of allowing hametz onto IDF bases has real life implications in terms of the morale of our soldiers. Given the rising tide of terror and the escalating voices for the destruction of Israel from Iran, why would we even entertain the idea of hamstringing ourselves even more by introducing this self-destructive innovation.

Rest assured that this initiative is part of a larger pattern, the death by 1000 cuts to the character of a Jewish state. Leftists, particularly those in the West, are outraged by the idea of a sovereign Israel and a Jewish sovereign Israel sends them into orbit.

Israel represents everything that the Left despises: particularity, national identity and the willingness to enshrine Jewish tradition into the fabric of the state. This stands in stark opposition to the undifferentiated universal pablum that the Left would have us subscribe to.

The revulsion for a Jewish Israel is even shared by many non-religious Jews who believe that clinging to our tradition somehow serves as a barrier to social justice, which after all seems to be the raison d’etre of Judaism to such Jews.

The Supreme Court has shown exquisite sensitivity to the sensibilities of non-Jewish communities. If the case involved, say, bringing pork into hospital wards for Russian patients, the court would most likely strike it down, not because it violates kashrut, but because it would offend Arab hospital workers and patients.

The rejoinder to the petition to the Supreme Court should include a grounding of the ban on hametz as part and parcel of the Basic Law that enshrines the Jewish character of Israel.

Surveys have shown that fundamental indicia of Jewish observance, such as attending a Seder, fasting on Yom Kippur, and yes, eschewing hametz during Pesach, are observed by the vast majority of Israeli Jews, including the non-religious.

These are aspects of citizenship in a Jewish State as much as they are religious practices. A Jewish Israel has the right to denote what the incidents of consensual Jewish practice are and to delineate on a national level those practices.

One of the takeaways from this looming crisis should be a renewed examination on the unrestrained discretion that the Supreme Court allows itself and the extra-legal criteria of reasonableness, as they define it, that increasingly marks their decision making.

If the Supreme Court cannot be counted on to defend the Jewish character of Israel, it will put itself into firm opposition with their own citizenry. The court risks being turned into a tool of the foreign funded delegitimizers of Israel, instead of a champion of Israel’s founding mission and values.

The court and the ruling coalition must know that ending the ban on hametz on army bases will be widely perceived as a red line crossed. The pushback against such a decision will be widespread, vocal, passionate and justified.

There will be demands for legislation specifically preventing such a move and such legislation will define the character of whatever government is in power to implement it.

At a time when Israel is struggling with internal threats, such as the possible resumption of internal violence in mixed towns and cities during Ramadan, and the rising tide of terror emanating both from within and without, self-inflicted wounds to our national consensus are a terrible idea.

We should see the move to allow hametz into Army bases as an intended slap in the face to Jewish Israel, not some trumped up human rights issue. By the way, aren’t Jews also entitled to human rights?

Maintaining the character of Pesach in our land is a Jewish human right. Don’t trounce on it.

The author is the chairman of the board of Im Tirtzu and a director of the Israel Independence Fund. He can be reached at [email protected]