20 years since 30 were murdered in the Seder slaughter - opinion

The Seder slaughter brought the terror death toll for 2002 to a total of 130.

Twenty years ago, I was anticipating a lovely Pesach visiting my brothers in Maryland. The first Seder was Wednesday evening. I finished teaching at McGill University and rushed to Montreal’s airport. Back then, our cellphones didn’t keep updating us with news. I arrived at my brother’s house feeling festive – until I heard about the Seder slaughter.

A Palestinian terrorist disguised as a woman detonated an explosive-filled suitcase at a communal seder at Netanya’s Park Hotel. The thirty dead, including Holocaust survivors, catapulted the death toll from Palestinian terrorism that murderous March to 130.

Further fouling my mood, we prayed in caravans because my brother’s synagogue was undergoing a $10-million-plus renovation. I knew such renovations take years of planning and often sustain a community. But, I also knew that much of the money was going into a catering hall and that no one would consider moderating the opulence to redirect some funds or energy to supporting Israel as it bled.

That Shabbat, I read a New York Times op-ed by Yossi Beilin, “More War is Not the Route to Israeli Security.” Although I often disagreed with Beilin, I admired his thought-provoking book His Brother’s Keeper on modern Zionism. But in this essay, Beilin blamed Israel, the target of terrorism, far more than the Palestinians, who had chosen terrorism over negotiations. Beilin also made absurd, self-defeating predictions, claiming that a “war against the terrorist infrastructure will give birth to more terrorists.” It infuriated me that, amid Israel’s anguish, a leading Israeli politician tried influencing Israeli politics via The New York Times.

Fortunately, former prime minister Ariel Sharon understood that, with terrorists swaggering around their cities, terrorizing Palestinians not just Israelis, Israel had to strike back. So did former president George W. Bush. That January, former Palestinian leader Yasser Arafat had lied to Bush, denying that the weapon-filled Karine-A ship, which Israel intercepted, was headed for the Palestinian Authority. As Arafat sweet-talked the president, Bush was reading documents proving the links that the Israelis seized and shared with the Americans, but had cleverly “forgotten” to publicize. 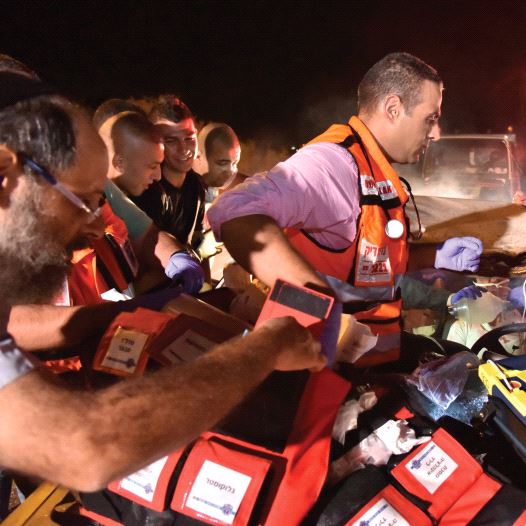 Muawia Kabha, the initial first responder to enter the dining room after the blast at the Park Hotel (credit: UNITED HATZALAH‏)

That April, Israel reentered the Palestinian cities it had entrusted to the PA under the Oslo Peace Process. Although 30 Israeli soldiers died, Operation Defensive Shield ultimately ended Arafat’s Terrorist War against Oslo by putting the terrorists on the defensive, night after night.

Thirteen of the dead ambushed in Jenin on April 9 were reservists – because Israel limited civilian casualties by sending soldiers into Jenin’s crowded Casbah, instead of bombing the bomb factories and terrorist cells from the air, American style. Even as I wondered if the new widows thought this moral move was worth their husband’s lives, even as I feared that Israel sometimes sacrificed soldiers to please Americans, including American Jewry, the Palestinians lied. They claimed that Israelis massacred 500 Palestinians. Actually, 56 died, mostly while fighting. Nevertheless, the media, the UN and the heavily-biased human-rights community spread the libel.

The human rights community continues (dys)functioning as the human wrongs community, trashing Israel mindlessly. Israel continues to try fighting morally, with restraint – yet rarely gets the credit. And, some Israelis continue bashing Israel in the American media, while many American Jews remain distracted by building projects and other trivialities, even when Israel is attacked.

Nevertheless, despite these chilling continuities, Israel has flourished. In 2002, Israel was paralyzed, demoralized and terrorized. Today, Israel is dynamic, defiant and well-defended. Fewer Israelis fall for Palestinian lies or fear international disapproval. Israel taught the world that terrorism cannot be defeated by appeasement or by defensive moves. Fighting terrorism requires counter-offensives, militarily and ideologically.

Thanks to those efforts, even with this latest wave of terrorism, life for Jews and Arabs is safer, people are happier, richer and more settled. Following the Abraham Accords, Israel has more peace partners ready to cultivate a genuine peace from the grassroots up – not top-down Oslo style – with cultural exchanges, business deals and visits back-and-forth.

Stress triggers our instinctive fight or flight response. Terrorists try generating enough stress in individuals to trigger national retreats from territories or policies or even countries. But, Zionists choose fight not flight. Israel keeps proving that the Jewish people have not just stopped fleeing – we have stopped apologizing.

Back then, a Hamas official sneered that Jews loved life too much to triumph. One of these days, our enemies will realize that our love of life may break our hearts when terrorists strike, but it doesn’t break our spirit. Our love of this life after centuries of suffering, only makes us more resilient, more defiant, more productive and more constructive – as demonstrated not just by these last 20 years, but these last 75 years.

The writer is a distinguished scholar of North American history at McGill University, and the author of nine books on American history and three books on Zionism. His book, Never Alone: Prison, Politics and My People, co-authored with Natan Sharansky, was published by PublicAffairs of Hachette.