Like the UN partition resolution of 1947, a two-state solution is unimplementable due to Arab hostility to Israel. 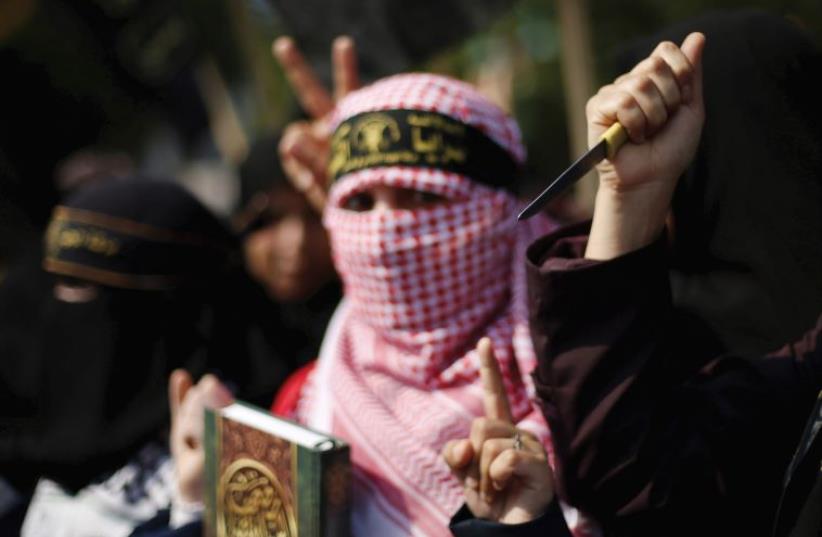 A PALESTINIAN woman holds up a knife in the Gaza Strip.
(photo credit: REUTERS)
Advertisement
The thousands of Israelis who gathered for the 20th memorial of the assassination of prime minister Yitzhak Rabin came to resurrect a ghost. They brought all the necessary tools for the ritual: left-wing political paraphernalia, speeches bashing nationalists, and foreign leaders whom they believe have the power to civilize the natives.The ghost they were trying to revive, however, was not that of Rabin, who denied he favored a Palestinian state on a number of occasions.It was the ghost of a political policy that has been declared dead or dying numerous times, yet which has been dug up and propped up, only to collapse again under its own dead weight.And each failed resurrection seems to make the monster more grotesque, leaving in its wake more Palestinian demands, grievances and violence.The faithful, however, are not deterred by the mere death of their savior, certainly not by past failures, and apparently not by terrorists who make their bloody intentions clear in word and deed.Even beyond the Israeli leftists who have turned a fallen leader’s memorial into the political event of the year, there is no dearth of people who see Palestinian hate-violence as just another bump in the rode to the utopian vision they can see so clearly in their minds’ eye, but dare not explain how to achieve and maintain.At the memorial, Bill Clinton and US President Barack Obama extolled the virtues of the two-state solution, despite the fact that both of them invested considerable effort in attempting to implement it, only to be undone by Palestinian leaders who deserted negotiations. (At a time when Palestinian children were targeting Jewish children with knives, Clinton had the gall to say that Israelis had to give “their children a chance too.”) US Secretary of State John Kerry, who did not attend the memorial, also continues to attempt to resurrect the ghost, despite watching the talks he sponsored go “poof” when Palestinians left negotiations to pursue statehood through international institutions – i.e., without renouncing violence against Israel.Since the failure of Kerry’s talks, Palestinian society has sent a wave of unprovoked stoning, car-ramming and stabbing attacks against Israel. Yet, Kerry’s first public reaction to the wave of terrorism was to complain about settlements, say the two-state solution needs to be pursued, and that the US would remain “engaged” in pursuing it.Likewise, in 2011 philanthropist and World Jewish Congress president Ronald Lauder apparently took seriously Ehud Barak’s “political tsunami” warnings about the UN vote on Palestinian statehood.He urged Israel to do more to restart negotiations over a two-state solution to head off the Palestinian initiative.Lauder too has learned nothing from the new wave of terrorism and the failure of Kerry’s talks – both to achieve peace and to avoid the same unilateral initiatives Lauder said talks would avoid.On the same day a number of Israelis were wounded by knife-wielding Palestinians, Lauder published an op-ed in this publication declaring his belief that “now is precisely the time” for renewing negotiations for a two-state solution and for the United States to “reengage in the... process.”For those who share the faith in the undying two-state solution, the problem is simple: “We have long known the outstanding issues between the two parties: borders, settlements, the right of return, and the status of Jerusalem,” as Lauder wrote. It is just a matter of getting the parties together and working out the details. After all, he continued, “seeking peace” is in the interest of all parties.Wrong. The outstanding issue is the Palestinian rejection of Israel, hatred of Jews, a willingness to imagine and embellish grievances, and to turn to violence to resolve disputes. Peace with a Jewish state in this country is something that too large a number of Palestinians view as not being in their interest.That is why Prime Minister Benjamin Netanyahu has rightfully made acceptance of a Jewish state and an end-ofconflict clause a sine qua non of any final-status agreement. Even assuming the other issues could be resolved, without true agreement from Palestinian society on that, there will be no peaceful, democratic Palestinian state. There will only be another rogue Middle East state hell-bent on killing Jews.So now is not the time to relaunch negotiations or for the US to “reengage” in fruitless talks over a solution that has failed more times than is worth counting.Like the UN partition resolution of 1947, it is unimplementable due to Arab hostility to Israel. As was the case in 1947, sticking by it dogmatically, and insisting on Israeli concessions that go with it, will result in more violence and instability.So let the “two-state solution” and the philosophy behind it rest in peace along with other failed policies. Instead, the US and those who desire stability and peaceful co-existence between Jews and Arabs under any framework should stand with Israel and target the Palestinian culture of Jew-hatred and violence that is the root of the conflict.Instead of tolerating wild libels about the Temple Mount or “field executions,” the US must unequivocally denounce the unprovoked murder of Jewish civilians and the incitement and condoning of such murder by the highest levels of Palestinian society, including Palestinian Authority President Mahmoud Abbas. It must demand that the PA actively work, over years if necessary, to rid Palestinian society of its violent hatred.Only tangible actions promoting acceptance of Jews and Israel in Palestinian society can yield any kind of peace, not empty declarations and political celebrations of a failed top-down policy that tolerates or ignores a culture of violence and hate.The writer is a Likud Central Committee member and an attorney.