The Temple Mount is in our hands

If something isn’t working, it can – and should – be changed, and then the new order will become entrenched. We’ll have a new status quo. 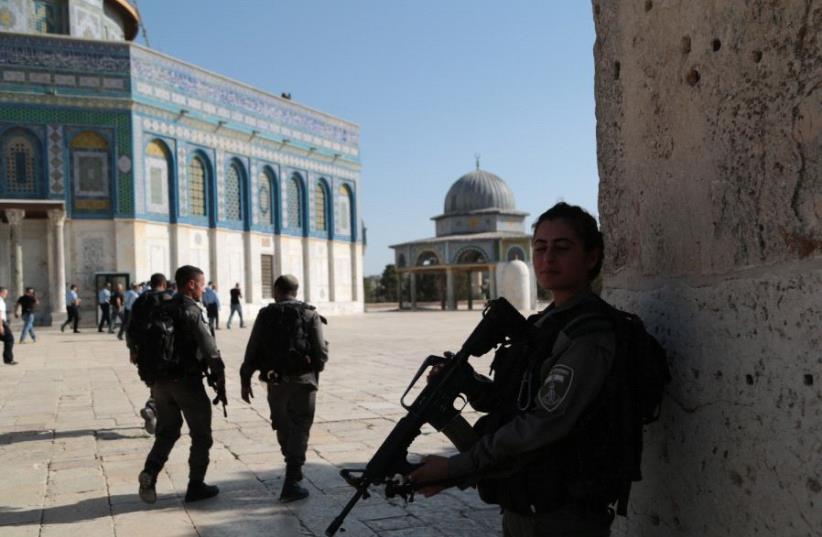 Border Police at sight of terror attack on Temple Mount July 14
(photo credit: ISRAEL POLICE)
Advertisement
The Temple Mount is a holy site, but there is nothing sacred about the status quo. We’ve been hearing repeated oaths of allegiance to the status quo, with people on all sides declaring they have no intention of changing it. If I forget thee, O status quo, let my right hand forget her cunning, Let my tongue cleave to the roof of my mouth if I remember thee not.But if something isn’t working, it can – and should – be changed, and then the new order will become entrenched. We’ll have a new status quo.Leaving control of the Temple Mount in the hands of the Wakf after the Six Day War was a big mistake.When Moshe Dayan asked, “What do we need this whole Vatican for?” he displayed appalling insensitivity to the significance of the site for the Jews.The Temple Mount, where two temples destroyed by our enemies once stood, is not just some religious headache that can be ignored. It has profound meaning for Jews, and Jewish sensibilities must not be disregarded, nor is there any reason to do so. The Muslim’s belief in freedom of religion for all, the pluralism of their faith, was plain to see for the centuries in which Jews were denied access to their holiest site. Now, 50 years after its liberation, Jews should have the right to visit the Temple Mount without being accosted by gangs of young punks funded by the Islamic Movement. We should also have the right to be there without being subjected to the degrading and provocative oversight of Wakf officials.The mosques aside, why should the Wakf hate-mongers have any status whatsoever with respect to the compound? Or the gates? Why are Jews only allowed to enter through the Mughrabi Gate? And why so few? Why are Jews the only ones kept out whenever there is an outbreak of Muslim violence? Why can’t we walk around freely? Why should we give the enemies of Israel the status of a state within a state? For years the Wakf has taken advantage of Israel’s desire to keep the peace: voicing blatant incitement in its Friday sermons; causing irreparable archeological damage; providing a safe haven for rioters; stockpiling stones meant for Jewish heads. The Temple Mount has become an arena of hostility and terrorism, and an ex-territorial one to boot. You can’t appease the aggressor; you have to stand up to him.On September 28, 2000, we visited the Temple Mount. At the time, our presence there was a protest against Ehud Barak’s intention to hand it over to the Palestinians. My father, Ariel Sharon, was firmly opposed to such a move, as was the overwhelming majority of the Israeli public, as evidenced by the results of every election since. We entered through the Mughrabi Gate with my father in the lead, along with several Knesset members from the Likud. An official from the Israel Antiquities Authority showed us around. Our visit was secured by hundreds of police officers.In fact, I saw a great many more policemen than Arab demonstrators. What kind of sovereignty do we wield if a short visit to the compound required this sort of security detail? The whole scene upset me. Israel wasn’t behaving like a confident sovereign power, but with unwarranted hesitancy, and all because of the authority it had granted the Wakf.Here’s what we should do: send the Wakf officials packing. Deploy security forces throughout the Temple Mount, so that everyone, including Jews, will feel safe. And make it clear that our sovereignty over the site is more than just empty words.Translated from Hebrew by Sara Kitai, skitai@kardis.co.il.