Megalodon: What were the largest predatory sharks on Earth? - explainer

If you are one to fear large sharks, and if the movies Jaws or The Meg terrified you, then the megalodon, the massive prehistoric selachians, are likely the stuff of nightmares.

By AARON REICH
An artistic illustration of the megalodon shark, one of the largest sharks to ever lurk in Earth's oceans.
(photo credit: Wikimedia Commons)
Advertisement

The megalodon was one of the largest types of shark to ever lurk in Earth's waters.

If you are one to fear large sharks, and if the movies Jaws or The Meg terrified you, then these massive prehistoric selachians are likely the stuff of nightmares.

Of course, the megalodon sharks are long gone now. And all that are left are a number of far smaller ocean predators roaming the seasons.

But just how big and dangerous were the megalodon sharks? When did they go extinct? And what was it that ended their reign as the top ocean predator?

Here is everything you need to know.

‘THE MEG’ is best when it’s being silly rather than dramatic (August 20, 2018). (credit: Courtesy)
How big is a megalodon shark?

The size of a megalodon was absolutely massive, but it was something that was actually unknown for a long time.

Ordinarily, the best way to determine the size of an extinct species would be through fossils. But the curious thing about sharks and their close cousins, rays, is that they don't really have bones. Instead, they have skeletons made mostly of cartilage. This is for good reason since it lets sharks conserve energy, but cartilage doesn't preserve well.

In other words, there are generally no shark fossils, with the exception of shark teeth.

But a recent study using a shockingly well-reserved megalodon vertebral column and a host of 3D modeling programs allowed for the reconstruction of a megalodon shark's size.

So how big was a megalodon shark? They were 16 meters long and weighed over 61 tons.

To put that in perspective, its length is equal to the height of three giraffes, longer than a London bus and a semitrailer, and taller than the Brachiosaurus dinosaur. Of course, other estimates put megalodon sharks as being much larger, around 20 meters.

In terms of weight, it weighs about as much as 10 elephants and is close in weight to a NASA space shuttle.

To put this in another perspective, compare this to other, modern sharks. The great white shark, one of the most infamous species, grows to at most a little over six meters and tends to weigh between two to three tons.

Even their teeth were insanely large, with a megalodon tooth comparable in size to an adult human hand. Unsurprising, given the species' scientific name of Otodus megalodon (big tooth).

Having said that, it is still dwarfed by other larger marine animals, such as several types of whales.

Also, contrary to popular belief, the megalodon may not have been the largest shark to ever swim the seas. The whale shark is bigger, sometimes growing to 18 or even 21 meters long. However, these gentle giants only filter feed and don't eat large prey – unlike the megalodon.

Was the megalodon a dinosaur?

Technically no. Megalodon sharks, like dinosaurs, were massive prehistoric animals. However, the word dinosaur is actually very specific, referring to a group of reptiles. Megalodon sharks were sharks, and not reptiles, and therefore could not be dinosaurs.

However, it does bring up an interesting point regarding age.

Interestingly, sharks have actually changed much over the years, and at one point around 19 million years ago, a mysterious shark extinction event may have occurred. No one knows what exactly happened, but the devastation caused to the global shark population is something that modern day selachians have never recovered from.

Megalodon shark jaws and teeth at the American Museum of Natural History in New York. (credit: Wikimedia Commons)
When did the megalodon go extinct?

What killed the megalodon?

No one actually ever "killed" the megalodon shark per se because no one really could have.

Megalodon sharks were absolutely massive, easily dominating the oceans as an apex predator. As such, it didn't really have any natural predators.

However, it likely did have competition in the form of emerging predatory cetaceans, meaning whales. Specifically, there were prehistoric species of sperm whales, such as the livyatan, and other similar examples that could have went after the same prey.

Other competition could have come in the form of other apex predators, such as great white sharks and killer whales.

The Ice Age began to roll in for Earth, which impacted the temperature of the oceans. This, in turn, impacted megalodon birthing areas and how it could retain body heat.

In terms of extinction events, this occurred during the Miocene epoch, which saw a number of species go extinct due to decreased food supply and an environment that favored faster swimmers that could have eluded predators.

It was these factors, in combination with increased competition, that saw the megalodon sharks become an afterthought as time and evolution moved the Earth forward. 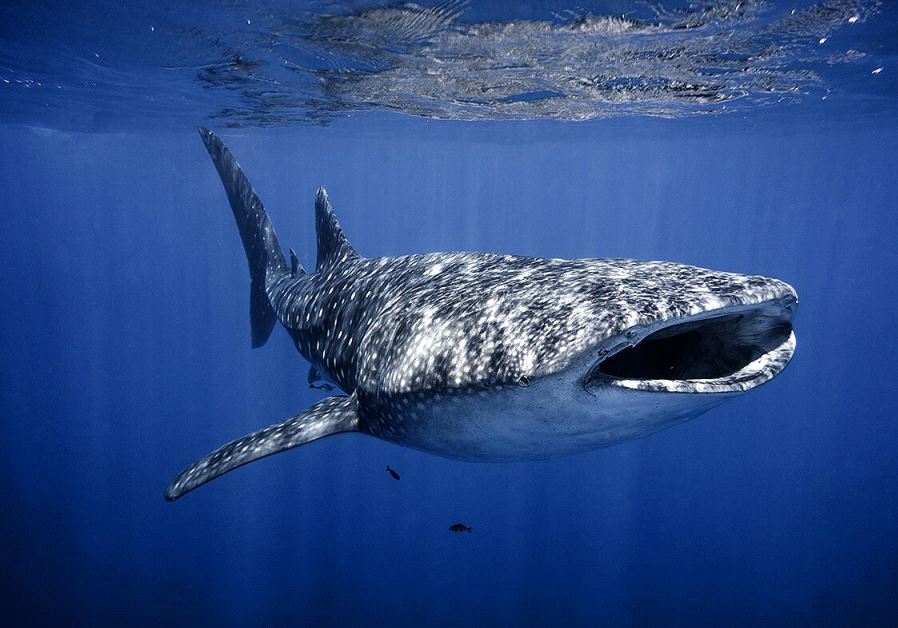 Whale shark swimming in Eilat (credit: OMRI YOSSEF OMESSI/NATURE AND PARKS AUTHORITY)
Who would win in a fight between a megalodon shark and a whale shark?

The idea of pitting two massive creatures against each other to see who would win is fascinating for many people, though the viability of actually being able to study this as well as the benefits and value of such interest is debatable.

Having said that, megalodons are apex predators and whale sharks purely filter feed, so this fight would likely go to the megalodon.

A blue whale surfaces to breathe in an undated picture from the US National Oceanic and Atmospheric Administration (credit: NOAA/HANDOUT VIA REUTERS)
Who would win in a fight between a megalodon shark and a blue whale?

Here, the megalodon will come up short - literally.

Regardless of how big a megalodon shark is, blue whales are far larger. Blue whales are the largest beings to ever live on Earth and with the exception of groups of killer whales, they have no predators either.

And in terms of sheer size, the blue whale will have the megalodon shark beat.

Who would win in a fight between the megalodon shark and a mosasaurs?

Now this is an interesting fight.

The mosasaurs was an incredibly large ocean predator who lived a few million years before the megalodon shark did. As a result, they never would have met.

They are similar in size and both possessed powerful bites, but ultimately, the megalodon would win out. This is because the mosasaurs, as a reptile, still had to breathe air, and its body was thinner and jaw meant to eat smaller prey.

Is the megalodon shark still alive?

No, of course not. They went extinct millions of years ago.

There are no signs or evidence to the contrary, and too many factors against it, such as it vanishing from the fossil record.

Apologies to selachian enthusiasts, but this shark is never coming back.