"The defense minister's decision completely ignores the pain inflicted upon the bereaved families and the general public who wish to [recognize the day] as they have done in years past." 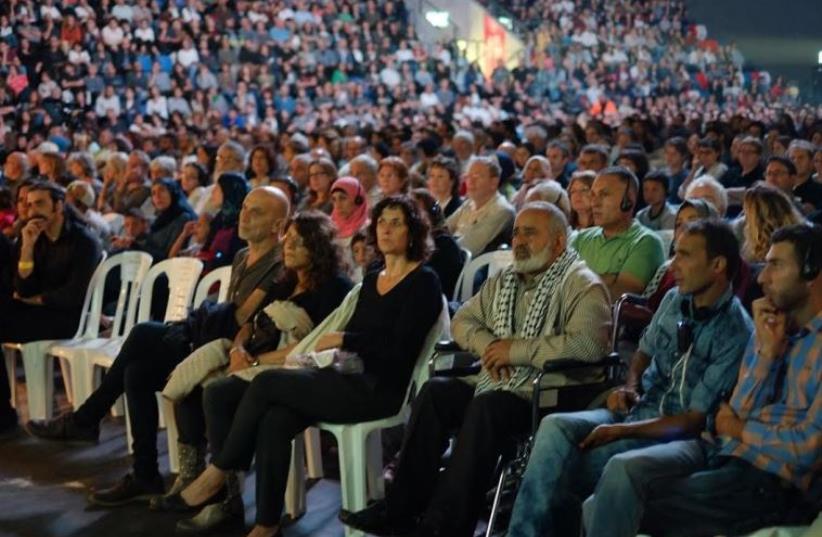 Participants of the joint Israeli- Palestinian Memorial Day ceremony in Tel Aviv
(photo credit: HAI ASHKENAZI)
Advertisement
The High Court of Justice on Tuesday granted permits to 90 Palestinians to attend the joint Israeli-Palestinian Remembrance Day ceremony in Tel Aviv on Tuesday night, overriding Defense Minister Avigdor Liberman’s move to bar them from entering Israel.Three justices – court President Esther Hayut, Uzi Vogelman and Anat Baron – noted that the state had permitted Palestinians to attend the ceremony every year from 2005 to 2016. Last year 225 Palestinians were denied entry to the ceremony due to unique security circumstances that the court said no longer applied.They said that Liberman’s move to block the Palestinians contrasted with the professional- expert level recommendation of the IDF Civil Administration, which recommended permitting them entry. Twenty others banned by Liberman were still not allowed to attend.Further, the court wrote that: “The defense minister’s decision does not take into account... the legitimate expectations of the events’ participants and even completely ignores the pain inflicted upon the bereaved families and the general public who wish to [recognize the day] as they have done in years past.”The two NGOs that organized the event and filed the successful petition to the High Court, Combatants for Peace and the Israeli-Palestinian Bereaved Families Forum, responded to the ruling by saying they are happy the court clarified that limits can be imposed even on the defense minister, and that Liberman has to keep his “personal tastes” to himself.“Liberman will not tell bereaved families how to commemorate their pain. The Israeli- Palestinian Remembrance Ceremony will be held this year with the participation of the Palestinians. It will be larger than it has ever been since it was first held 13 years ago, and the entire public is invited to take part in it.”Following the court’s decision, Liberman said, “The High Court of Justice equated bereavement with terrorism this morning. The High Court’s decision harms the most unifying national day for the people of Israel. The final result: division instead of unity.”Meretz MK Ilan Gilon praised the Supreme Court's decision: "It would be better if Defense Minister Liberman would focus on his real job as defense minister, and stop turning Palestinian citizens into 'existential threats'  to the State of Israel."On Tuesday, singer-songwriters Dana Berger and Efrat Gosh both pulled out of attending the event after previously pledging to perform there. Berger explained that "the minute I realized [my participation] was hurting people I felt obligated to cancel."Last week, Liberman made the decision to bar 110 Palestinians from attending the ceremony in Tel Aviv, drawing mixed reactions from politicians and the public. Combatants for Peace and the Bereaved Families Forum issued a plea to the Supreme Court shortly thereafter.In 2017, 225 Palestinians were denied entry to the ceremony, which was attended by approximately 4,000 Israelis. A simultaneous screening of the event was then organized in the West Bank town of Beit Jala.