IDF forces in the area shot and neutralized the Palestinian attacker. 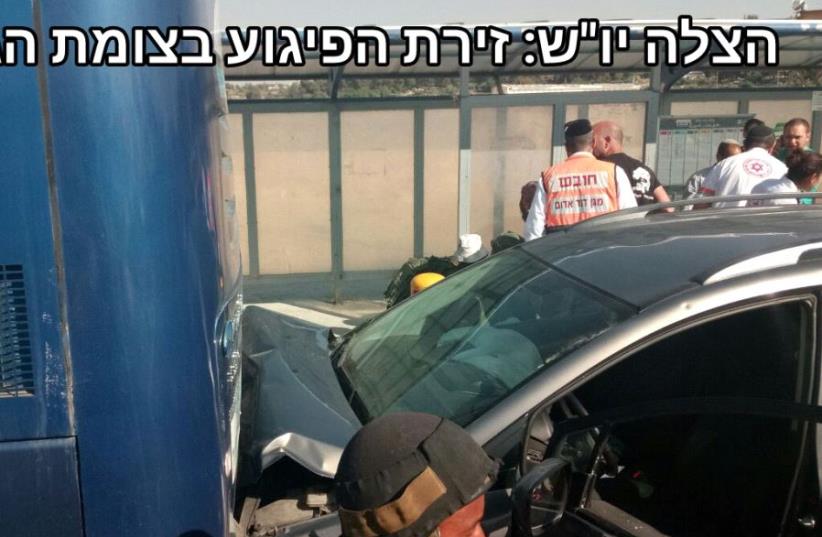 Scene of a car ramming terror attack at Gush Etzion Junction in the West Bank on April 19, 2017
(photo credit: COURTESY UNITED HATZALAH)
Advertisement
A 60-year-old Israeli lightly injured his head in a vehicular terrorist attack at a bus stop at the Gush Etzion junction on Wednesday evening.Security forces at the scene fatally shot the Palestinian driver who rammed a gray, fourdoor hatchback into the back of a bus.A photo of the car showed a glass window shattered from the impact and a knife in the car’s cup holder. The IDF confirmed that a knife had been found in the vehicle.Magen David Adom paramedic Shmuel Daniel said that upon arrival at the scene, he saw the victim on the ground “conscious” but “confused.”Witnesses described how he had been hit as he stood behind the bus, Daniel said.Magen David Adom transported both the Israeli civilian and the terrorist to the Shaare Zedek Medical Center in Jerusalem.The hospital spokeswoman said that doctors were unable to save the driver’s life and pronounced him dead shortly after his arrival.According to the Ma’an News Agency, the driver was Suhaib Moussa Mashour Mashahra, 21, from the village of al-Sawahira outside of Jerusalem.The Gush Etzion spokesperson said the incident marks the second such attack in the last month. Earlier this month, Sgt. Elchai Teharlev was killed in a car ramming attack while guarding a bus stop just outside the West Bank settlement of Ofra.Gush Etzion Regional Council head Shlomo Ne’eman said that the attack was one more attempt by terrorists to subdue Israel, but “they should understand that this just strengthens us.”He called on the government to respond by authorizing more building in Judea and Samaria in order to send a message to terrorists that there is a price for such actions.According to the Foreign Ministry, since September 13, 2015, Palestinian assailants have carried out 1,754 stabbing attacks; 113 attempted stabbings; 143 shootings; 58 vehicular ramming attacks; and one bus bombing.Forty-eight people were killed in these attacks and 713 injured, including four Palestinians.