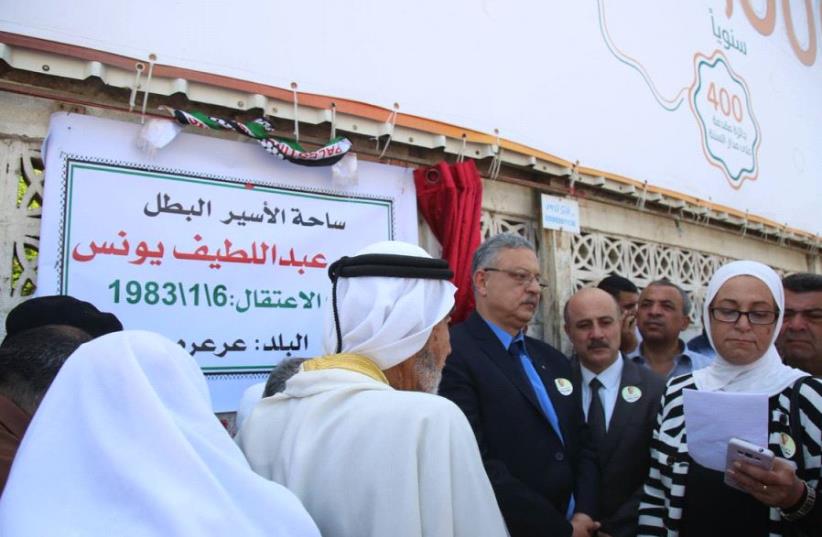 Dedication of Tul Karm square named after Maher Younis
(photo credit: TWITTER)
Advertisement
Just days before US President Donald Trump arrives in the region, the Palestinian Authority which claims it wants to reach a peace agreement with Israel, continues to take actions to glorify killers of Israelis. Earlier this week a square in the West Bank city of Tulkarm was named after Maher Younis, who has been in prison in Israel since 1983 for the killing of IDF soldier Avraham Bromberg in 1980.The square, in the Palestinian city located just eight kilometers east of the Israeli city of Netanyah, was dedicated in a public ceremony attended by the mayor and other local dignitaries.Maher Younis was convicted, along with his cousin Karim Younis of killing Bromberg and stealing his rifle. Both are Arab-Israelis from the town of Arara, near Umm Al-Fahm, and are among the longest incarcerated security prisoners serving sentences in Israeli prisons. While many Palestinian-born terrorists were freed in various prisoner releases over the years, Israel has consistently refused to free Arab citizens of Israel convicted of carrying out similar crimes.Avi Bromberg, the victim's nephew spoke to KAN radio Tuesday morning and decried the honor being bestowed on his uncle's killer. "The incitement never stops and is constantly more shocking," said Bromberg. "It is against the law to honor these killers in Israeli Arab towns, so the Palestinian Authority take it upon themselves."Israel has often cited the issue of Palestinian incitement, specifically the naming of streets and institutions after terrorists as a major obstacle for peace.Former Palestinian Minister of Prisoner Affairs Ashraf Al-Arjami, told the public radio broadcaster that the Palestinian Authority is against acts of terrorism carried out against civilians, but is helpless to stop what he referred to as "local initiatives."According to Arjami, the decision to dedicate the square was made by the mayor of Tulkarm and represented the desire of the Palestinian public to honor people they consider "heroes and patriots."Earlier this month a street in Jenin was named after Karim Younis.Both cousins are among the leaders of the ongoing hunger strike being staged by Palestinian prisoners held in Israel.