Danny Danon to UN forum: 'See you in court, BDS'

Danny Danon says the days of the Boycott, Divestment and Sanctions movement's lies and intimidation are "coming to an end.” 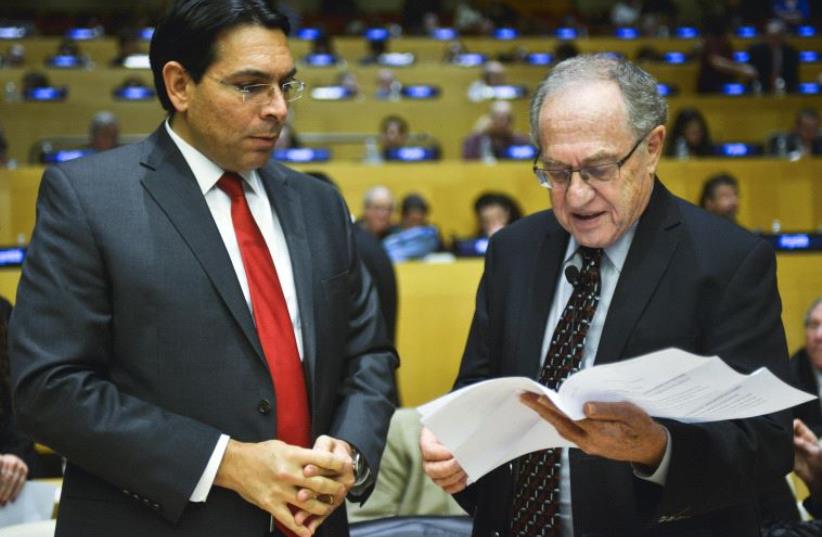 Danny Danon and Alan Dershowitz
(photo credit: HAREL RINTZLER)
Advertisement
NEW YORK – Hundreds of people gathered at United Nations headquarters on Wednesday night to attend a forum held by the Israeli Mission to the UN to discuss the legal fight against the Boycott, Divestment and Sanctions movement.Ambassador Danny Danon hosted the event in his capacity as the chairman of the UN Sixth Committee, the primary forum for the consideration of legal questions in the General Assembly.“We are here to send a simple message to the BDS movement: To the bullies who harass students on campus, to those who use the language of civil rights to mask their hate, to the activists who are conducting this illegal and unjust campaign of hate; your time is over, your movement based on lies and intimidation is coming to an end,” he told the crowd. “We will use every tool and every legal measure to stop the hate.”
Anti-BDS conference at the UN
Putting a stop to the anti-Israel movement, Danon said, should be at the top of the UN agenda. “We will focus on lawfare, the use of legal procedures, to fight bias and discrimination and to stand up to boycotts. We are here to learn from the experts to think of new ways to collaborate so we can tell BDS activists: See you in court! “But lawfare isn’t just about using the law as a shield; it’s also about engagement,” Danon added. “We engage institutions and trust them to do the right thing. We trust them to follow the law and to follow the principles of justice. And that’s why we will win, because the truth is on our side, history is on our side and justice is on our side.”Wednesday’s event brought together law students, legal scholars and international law experts including Prof. Alan Dershowitz, Zionist Organization of America president Morton Klein and Emory University Center for the Study of Law and Religion’s Senior Fellow and Project Director Dr. Mark Goldfeder, in order to discuss the legal means of blocking BDS.Dershowitz said he believes legal tools can be used against the BDS movement, considering the fact that it “engages in discrimination based on national origin, which is illegal.”“But I do worry that sometimes when you pursue legal remedies, you win in the courtroom but lose in the court of public opinion,” he added. “BDS must be fought in the court of public opinion. It is not enough to fight BDS in court of law.”Back in May, the Israeli Mission to the UN hosted the largest anti-BDS gathering in history in the General Assembly Hall. Some 2,000 students, activists and legal professionals attended.The Israeli Mission said it will draft a position statement on the legal battle against BDS using the insights of experts who spoke at Wednesday’s event.