Hezbollah is a radical Shiite militant group based in Lebanon, headed by Secretary-General Hassan Nasrallah, that has been waging a guerilla campaign against Israel since the 1980s. The group has been designated as a terrorist organization by the United States, Israel, Canada, the Arab League and the Gulf Cooperation Council. Its military wing is designated by the United Kingdom, Australia and the European Union. One of Hezbollah's key goals is the elimination of the State of Israel and the group has found itself in regular conflict with Israel since 1982, including during the First Lebanon War and the 2006 Lebanon War. The First Lebanon War, otherwise known as the South Lebanon conflict, started in 1985 and ended with Israeli withdrawal in 2000. 559 Israeli soldiers were killed and 840 wounded during the conflict and more than 1,200 Hezbollah militants were killed and approximately 1,000 wounded. The 2006 Lebanon War began on 12 July 2006 when Hezbollah militants launched a cross-border attack on Israeli troops, killing three and kidnapping two IDF soldiers. The five-week conflict saw 121 IDF soldiers killed and 1,244 wounded. 44 Israeli civilians were killed during the war as a result of Hezbollah rocket and mortar fire. Israel claims that between 600 and 800 Hezbollah militants were killed during the conflict, in addition to at least 1,000 Lebanese and foreign civilians. The remains of the two seized Israeli soldiers, whose fates were unknown, were returned to Israel as part of a prisoner exchange in July 2008. Hezbollah has also planned and carried out major terrorist attacks on Israeli citizens and infrastructure outside of Israel. In 2012, five Israeli citizens were killed in a bus bombing attack in Burgas, Bulgaria. More recently, Hezbollah has played a key role in the Syrian Civil War alongside the Syrian government led by Bashar al-Assad, committing thousands of fighters to operations led by the Syrian army. Its role in the Syrian Civil War has increased sectarian tensions in Lebanon, with members being targeted by Sunni militants in the country. Hezbollah has close relations with Iran, often being described as an Iranian proxy group. Reports suggest that Hezbollah has been the recipient of Iranian weaponry, including missiles capable of striking many of Israel’s key population centers. Thousands of Hezbollah’s militants have undergone training in Iran on a variety of warfare types. Hezbollah also receives considerable financial and political support from Iran. Some estimate that Iran receives approximately $200 million in Iranian aid annually. It is believed that Hezbollah widely fundraises and money launders through global drug networks to finance its operations. The group is one of two main parties politically representing Lebanon’s Shiite Muslim community, alongside the Amal Movement, in the Parliament of Lebanon. Hezbollah currently holds 14 of the 128 seats in the parliament, forming part of the Resistance and Development Bloc. Parliamentary elections are set to take place in May 2018. The group's manifesto since inception has preached for the elimination of the State of Israel. The organization is responsible, among other things, for the 1994 AMIA bombing of a Jewish cultural center in Argentina, the 2012 Burgas bus bombing against Israeli citizens, and for the kidnapping of several Israeli soldiers.
Read More
Less

The US targets Iran’s key henchman ‘Abu Fadak’ in Iraq

On Wednesday, Abu Fadak al-Mohammadawi was listed as a Specially Designated Global Terrorist.

Why were there massive airstrikes against Syria? - analysis

The strikes come as the Trump administration is wrapping up its era.

It is believed that this shepherd is part of a group that works in cooperation with Hezbollah and crossed into Israel on purpose.

The 57-year-old suspect manufactured a false identity, claiming he was the manager of a foreign firm, and used false French and Portuguese passports. 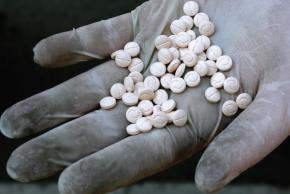 Hezbollah denies links to tons of amphetamines seized in Italy

Nasrallah stressed that Hezbollah would "fire any young man in the party if it becomes evident that he is using drugs in any way."

Aviv Kochavi: The IDF chief of staff in a political minefield

Aviv Kochavi marks two years as Israel’s top military officer – two years of non-stop action against Iran but also of domestic politics that keep getting in the way.

Iran's view of Biden as restrained could lead to hitting Israel harder, INSS

INSS said that threats from Iranian proxies in the North, including Hezbollah and from proxies in Syria, “are the greatest military threat in 2021."

Nasrallah: Iran is a strong country, does not need its proxies to attack

“I want you to know,” he said, “Iran does not need its proxies — its friends and allies. It will respond in the right place and time, and however it wants,” he said.

Will Hezbollah face continued pressure in 2021 in Europe?