Barkat says move ‘demonstrates once again the ludicrous, anti-Israel nature of the organization’ 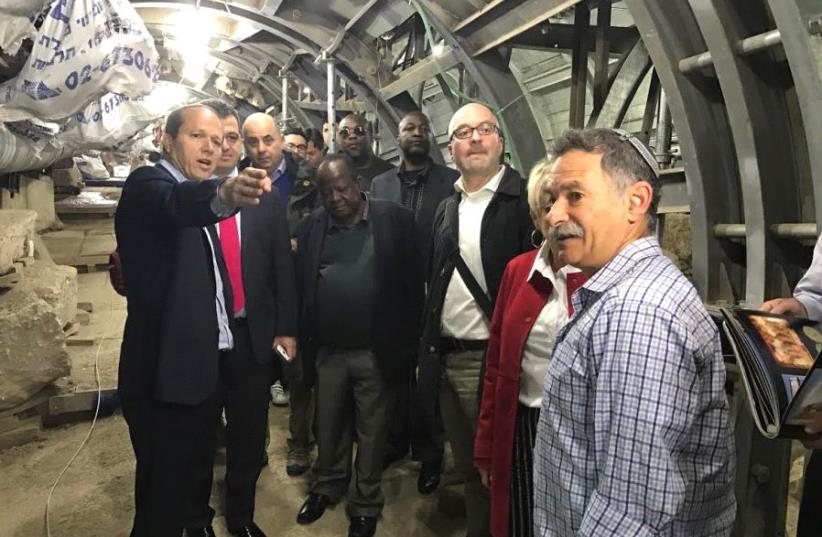 Jerusalem Mayor Nir Barkat with UNESCO ambassadors in City of David
(photo credit: COURTESY OF ARNON BUSANI/FRAYDA LEIBTAG)
Advertisement
Jerusalem Mayor Nir Barkat on Wednesday – supported by a cross-section of residents and visitors – uniformly condemned UNESCO’s most recent resolution attempting to sever Jewish ties to the capital of Israel.Noting that he led members of the organization’s delegation on a private tour of the City of David just weeks earlier to prove the indisputable connection between Judaism and Jerusalem, Barkat said he was “outraged” by the vote.“With a Bible in our hands, we walked on the very stones where kings and prophets walked 3,000 years ago,” the mayor said. “We saw the undeniable connection between Jewish history in the city of Jerusalem and the words of the Bible – a connection that is indisputable.”Barkat continued: “The resolution that UNESCO passed Tuesday demonstrates once again the ludicrous and anti-Israel nature of the organization. Rather than support Jerusalem, they choose to side with our enemies.”
PM Netanyahu reacting to UNESCO resolution (credit: REUTERS)
The most effective response to the resolution, Barkat said, would be “to continue to develop and advance the city of Jerusalem, the eternal home and capital of the Jewish people.”“We will not allow these unfounded declarations to discourage us from our mission – protecting Jerusalem’s 3,000 years of history, while leading Jerusalem into the future,” he said. “Happy Independence Day to the State of Israel and to Jerusalem, which is celebrating the 50th anniversary of the city’s reunification!” Jerusalem residents and visitors from all levels of religious observance were no less forgiving of the resolution when asked their opinions on Wednesday.David Rosenfeld, 21, who is from Brooklyn and is studying at a capital yeshiva, described the vote as “100% wrong.”“I believe that Jerusalem belongs to the Jews, and has always been for the Jews,” he said while having coffee with a friend at a Jaffa Road café.“I think they are picking on Israelis and Israel because of propaganda against Israel created by Arabs, who are amazing at doing it. All people see are terrible things [about Israel] and never see anything good. And when you see bad it always sticks in your head.”Moreover, Rosenfeld said, he believes the ruling will only engender greater anti-Israel and Jewish sentiment globally.“I think this makes people more antisemitic because it makes us look like we’re fighting the world, even though we belong here and they’re trying to kick us out.”Daniel Rotem, a secular 23-year-old construction worker who was born in Jerusalem, used stronger language to express his displeasure over the resolution, which follows another from UNESCO denying Judaism’s connection to its holiest site, the Temple Mount.“It’s absolutely bullshit,” he said, while sitting with several friends near Zion Square. “It’s like somebody saying that New York is not part of the USA.”While Rotem conceded that Jerusalem is also home to Arabs and Christians, he nonetheless asserted that it remains under Jewish sovereignty, adding that notions of an apartheid state or occupation in the capital were unfounded.“Look around you!” he said incredulously, pointing to the bustling, multi-cultural Jaffa Road. “You see free people: Arabs who are going to work, going to shop. They are free!” Christian tour guide Olafur Johannsson, a native of Iceland who has spent much of the past 38 years in Jerusalem, said he was not surprised by the resolution, which he dismissed as politically motivated.“We knew that UNESCO would do this,” he said matter of factly as he took a break from the newspaper he was reading on Ben Yehuda Street.“They have been against Israel from the beginning,” he continued. “I remain pro-Israel, and most of the Christians stand with Israel.”Meanwhile, Sharon Shenhav – a veteran women’s rights attorney formerly an Israeli delegate to the Commission on the Status of Women that met annually at the UN in New York – also dismissed the resolution as politically motivated.“It was clearly political, and the countries that abstained should be ashamed of themselves,” she said. “They should have voted against it and not allowed it to pass. It’s shameful. UNESCO is a political organization that is anti-Israel.”Shenhav continued: “It’s all political. It’s what they used to call the ‘nonaligned nations,’ which includes the Arab, Asian and African countries who all got together and are the majority vote in the UN, so they outnumber the EU countries, which should have voted against it.”Still, the resolution was welcomed with open arms by Emek Shaveh, a leftwing consortium of European- funded archeologists and activists that has repeatedly condemned what it calls the “Judaization” of east Jerusalem.“UNESCO’s decision on Jerusalem yesterday is one of the best, most just and most long-awaited by the organization,” Emek Shaveh said in a statement.“UNESCO, in effect, said what it had to say based on its mandate to protect world heritage sites. Israel is working unilaterally in the Old City, digging and advancing its construction, regardless of Jerusalem’s historical character, and of it being a world heritage site.”Emek Shaveh added: “UNESCO also stated a known fact: east Jerusalem is occupied territory.”