Forensic evidence leads police to a nearby Palestinian village. 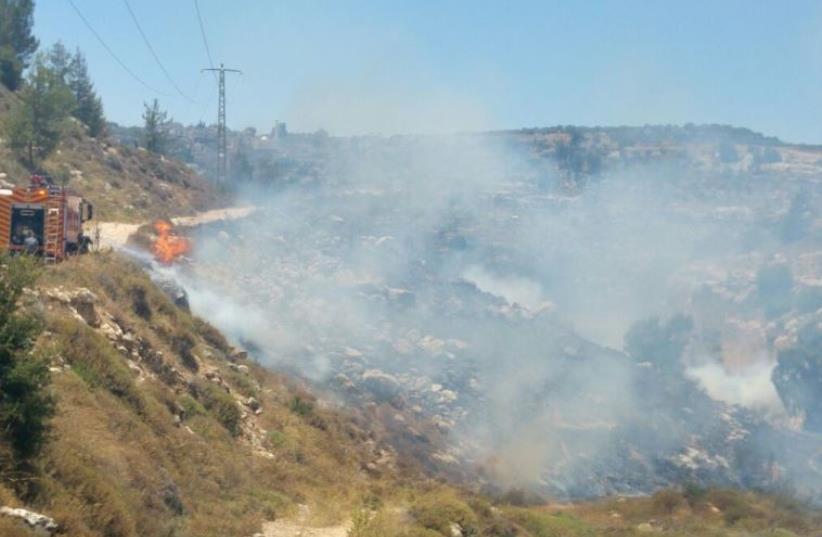 Forest fire possibly started by Arson in Jerusalem
(photo credit: JERUSALEM FIRE DEPARTMENT)
Advertisement
Less than 24 hours after police determined arson caused several Jerusalem-area forest fires that have destroyed nearly 250 acres of trees, police said on Sunday that another arson near the Malha railway station forced its evacuation and temporary closure.According to police spokesman Micky Rosenfeld, Sunday’s fire was deliberately set in the afternoon at multiple points in a wooded area adjacent to the Malha railway station, near Teddy Stadium and the Malha Mall.“The fire broke out during the afternoon at a nearby forest and police and fire fighters were called in, resulting in the evacuation of the railway line out of Malha due to fire and heavy smoke,” said Rosenfeld.The blaze was contained and extinguished before causing any damage to the railway, he said.“Investigators at the scene determined that the fire was started deliberately and simultaneously at a number of different points, with evidence leading to a nearby Palestinian village,” he added, noting that no one was injured during the blaze.“Police are searching for suspects and no arrests have been made.”Rosenfeld said police are investigating whether Sunday’s blaze is related to another suspected arson on Saturday in the forests of Kibbutz Ma’aleh Hahamisha near Jerusalem, which were believed to have been started by firebombs hurled from a nearby Palestinian village.Saturday’s blaze necessitated some 17 teams of firefighters, along with four fire-fighting aircraft, to extinguish.Police said Saturday’s fire was the third blaze in the area in the last week, adding that an investigation has been opened to determine if the fires were started by residents of the nearby Palestinian village of Bidu.The fires on Saturday follow another blaze on Thursday at the kibbutz, as well as Friday afternoon in the woods near Kibbutz Tzora. In both cases, fragments of firebombs were found where each blaze had started.There were no reported injuries due to the fires, police said.JTA contributed to this report.