Despite Lawrence of Arabia’s promise, the British and French divided key Ottoman territories into their own mandates at the San Remo conference. Through the Sykes-Picot agreement, the British took Iraq and Palestine (which included Jordan) whereas the French took Lebanon and Syria.  The British ruled their mandate by indirect rule, whereas the French ruled by direct civilian and military rule.  At the Paris Peace Conference, Woodrow Wilson laid out his 14 points for the world after WWI.  Of particular importance were point 5 which concerned “readjustment of colonial claims in the interest of the inhabitants as well as the colonial powers” and point 14 “A league of nations to protect "mutual guarantees of political independence and territorial integrity to great and small nations alike.” This led to the King-Crane Commission, which was created to carry out Wilson’s 14 points.  The first recommendation of the commission was  “Foreign administering power must be by mandate; NOT colonizing force”.  From April 19-26, Britain and France (along with Japan and Italy) attended the San Remo Conference.  This officially enacted the Sykes-Picot agreement and gave Britain Iraq and Palestine and the French received Lebanon and Syria.  The acquired territories were put under mandatory control until the mandatory powers, under criteria they chose, deemed they were ready for independence.  The British and French, wanting to carry through on their decision to divide the Middle East among them, decided that the Arabs, just freed from the Ottomans, were not ready for self-government. 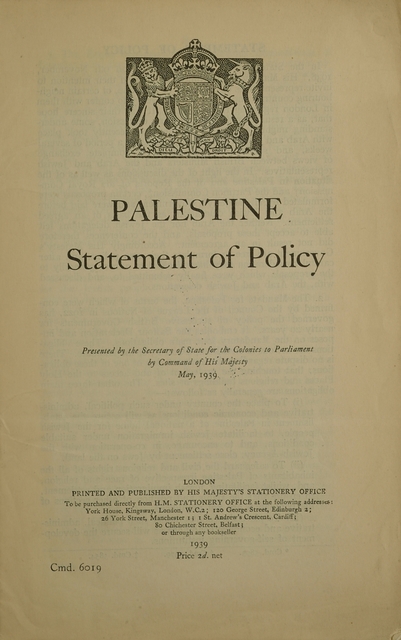 During WWII, the British kept the Arabs quiet while the Jews awaited war’s end to declare war on the British.  Britain turned away ships filled with Jewish refugees in keeping with the Passfield White Paper, creating images that reverberated around the globe.  The Yishuv’s campaign against the British, the 47-48 war between the Arabs and Jews and the 48’ Arab-Israeli War ended essentially ended the British mandate in Palestine.  Ernest Bevin referred the issue to the UNSCOP, which voted overwhelmingly in favor of Palestine’s independence.   Britain didn’t wait for the UNSCOP’s decision, however, and decided in September of 1947 that the mandate would end on May 15, 1948, and so it did.  Leaving behind no established government, the Palestine mandate was one of the biggest failures in British imperial history.  According to William Cleveland: "Transjordan was an artificial state created to accommodate the interests of a foreign power and an itinerant prince in search of a throne." Precisely.  Britain sought to centralize control over the scattered Bedouin tribes of the region and prevent them from attacking other tribes in the French mandate.  Tasked with bringing order to the region, Abdallah was given control backed by British monetary and military support.  Thus, Britain exercised indirect rule over Transjordan, but still retained control over foreign policy, the military and the budget.  They pushed for building a strong armed force.  Despite their indirect control, the army was commanded by British officers, yet largely composed of Arab bedouin troops.  They also filled many administrative roles with British officials.  Ultimately, Abdullah played his cards right and strongly supported the British in WWII.  For this Transjordan was granted independence in 1946 and he was made King.  Greater Syria was largely destroyed during WWI.  Immediately following the war, the French imposed their rule over the region.  They claimed to be protectors of the Maronites and used religion to justify their rule, which did not go over well with Muslims.  Previously they had invested heavily in Syrian infrastructure.  Through their military, the French exerted power over their mandates in the Levant through direct rule.  The French asserted their mandatory control over Lebanon and Syria when General Gouraud forcibly dethroned Faysal in Damascus.  His rule lasted no more than 24 hours.  The French brought in a huge military unit and and a large number of administrators to orchestrate the effort. This set the stage for how France would govern the mandate for the next few decades; The French silenced local political leaders and placed authority in the hands of a French high commissioner.  There created conditions that would make the Levant dependent upon French rule.  Paradoxically, mandatory powers were given control so they could bring their territories to independence as quickly as possible.  Through their appointments of French officials to governing positions, they instead created a situation that weakened the indigenous populations ability to self-govern, and prolonged their mandatory control.  The French promoted regional and ethnic fragmentation .  The goal?  divide and rule.  Like countless oppressors such as the Gush Emunim, their mission was to prevent a collective Syrian national identity from forming. France created Greater Lebanon in 1920 by adding Sidon and Tyre, as well as the Biqa Valley to the same jurisdiction as Mount Lebanon.  Gouraud did this to protect the Maronites from Syria while simultaneously making them dependent upon the French, as the Maronites composed less than a third of the overall population of Lebanon.  All of these different groups were first and foremost loyal to their religious affiliation, making it tough to from a collective Lebanese identity.  In 1926, a constitution was created that formed Lebanon.  The chamber elected a president, who in turn could elect the prime minister and cabinet.   The French still had veto power over all Lebanese actions.  This didn’t bother Maronite and president of France from 1936-1941, Emile Edde, who had went to school in Paris and hoped to have Lebanon become closer to the French as opposed to the Arab world.  Al-Khuri, on the other hand, was more sympathetic to the Muslims and his Constitutional Bloc wanted nothing to do with France. Despite their differing aspirations, Edde used his constitutional power as president to select a Muslim as prime minister of Lebanon.   This was partly due to the Franco-Lebanese treaty signed in 1936, which sought to create fair representation for all religious groups in government.  More or less, this brought Christians and Muslims together.

Even though they were supposed to be granted independence, the new Vichy French administration dissolved parliament and ripped the constitution to shreds.  During the war, Maronite Christian Bishara al-Khuri came to power and selected Riyadh al-Sulh, a Sunni muslim, as his prime minister.  They forged the National Pact of 1943, which recognized Lebanon as distinct from the Arab world with both the Christian and Muslim communities playing a distinctive role in the country.

Syria was carved into a few separate political units by the French.  Aleppo in the north, Jabal Druze in the deep south, the state of Damascus ranging from Damascus to Palmyra, and an Alawite state in Latakia.  In an effort to isolate them from political life, The Alawite and Druze states were separate from Syria up until 1942.  The goal was to make sure that wealthy Sunnis made the decisions.   This was all enforced by the Armee du Levant, composed of some 15,000 French troops.  The High commissioner of Syria and Lebanon held the most authority over the mandate.  All meaningful posts in the mandate were reserved for French officials, unlike the British who siphoned off these jobs to locals.  Many uprisings occurred in response to French rule, however just as they were begging to spread the French quelled them.  The one exception was the Great Revolt, as the Druze drove the French out of their territory and eventually rallied the people of Homs and Damascus to their cause.  The French responded by flexing their technological advantage and using planes to bomb Damascus and killing over 1,000 people.  After the revolt, Syrians formed the National Bloc to represent their cause.  They payed lip service to the French while at the same time representing the locals.  After the revolt, the French were willing to cooperate with the Bloc to avoid such a tragic event from occurring again.  Overall, the Bloc wanted independence but were suppressed from gaining real governing authority.  In 1929, A Syrian assembly drew up a constitution asking for independence, but the French rejected it. Fast forward a year, and the French drew up a new constitution that extended their rule by giving them ultimate veto power over any decisions made by local bodies of government.  In 1936, Leon Blum was elected in France.  Blum signed a treaty with Syria promising them independence, however he fell out of power a year later and it never came to fruition.  In 1939 the newly elected French government needed the Syrian constitution and gave Turkey the valuable territory called Alexandretta. During WWII, France fell and a new Vichy regime came to power.  The effect of the war on Syria was devastating, as the British orchestrated a huge naval blockade of the Levant.  This resulted in Hunger Marches, followed by a British-led and Free French invasion of Syria that was supposed to grant them independence.  After initially restoring the mandate administration in the Levant , the Free French leader De Gaulle finally ‘decided’ to grant the Syrians free elections.  In 1943 elections were held and the National Bloc resumed power, but De Gaulle still would not let go.  After WWII he even invaded the Levant, but under British pressure he finally gave it up.  Even though they were technically given independence in 1941, Lebanon and Syria did not become fully sovereign until 1946.  In Lebanon and Syria, France insisted upon having French officials directly rule over their subjects.  Therefore, the people of the Levant hadn’t governed themselves for years and lacked the skills needed after the mandates ended.  Frances legacy in Lebanon and Syria is one of abuse and deprivation. As you can see, the British and French exercised extensive control over Iraq, Lebanon, Palestine, Syria and Transjordan in the interwar period.  They dramatically changed the composition of the region, drawing borders with little regard to existing religious and ethnic tensions.  The British allowed local elites to assume governing roles and a certain degree of autonomy, while still controlling vital interests in their mandates.  The French, on the other hand, placed French administrators in all levels of government and military, depriving local leaders from governance.  Either way, both imperial powers exercised extensive power over their mandates, albeit through different means.  Except for Iraq, WWII relinquished the mandates of British and French rule and granted them independence.  The British ruled through indirect rule whereas the French ruled by direct rule, however both powers left their mandates worse off than they found them.  Contact: [email protected]