The Nano Bible is a .5mm2 silicon chip, roughly equivalent to the size of a grain of sugar, coated with a 20-nm.-thin layer of gold. 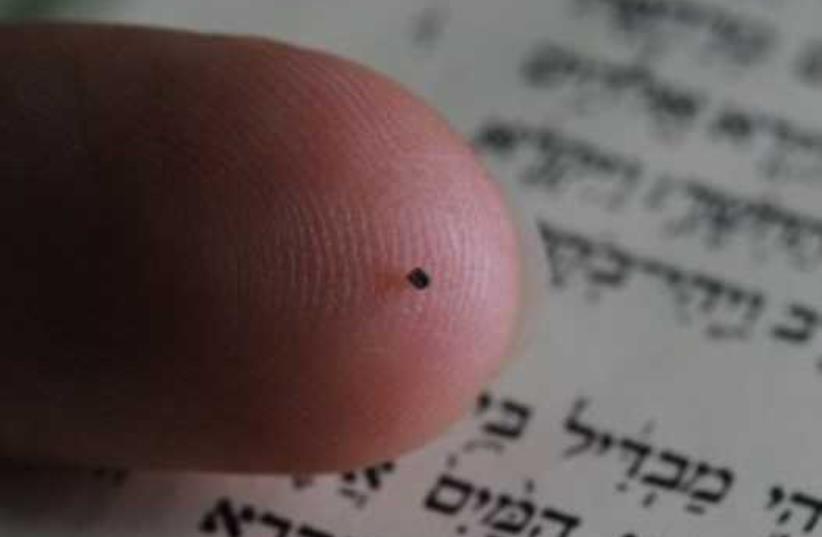 An electron microscope is being installed in a new visitor center in the Old City of Jerusalem to allow tourists to view the Nano Bible, the smallest bible in the world.

The Nano Bible is a .5mm2 silicon chip, roughly equivalent to the size of a grain of sugar, coated with a 20-nm.-thin layer of gold. On the chip are the some 1.2 million letters of the Bible that were engraved on it using a focused ion beam.

“I wanted a Bible that would be with me all the time and give me the same feeling I have when I put on the tefillin,” said Ami Bentov, who is behind the center. “When the Bible says to put it on your heart it never says what that meant but maybe it’s something emotional.”

Bentov, who is also a video journalist, was invited to the Technion Institute in Haifa where the Nano Bible had been printed as an example of what nano technology can do.

The electron microscope that will show the Nano Bible in Jerusalem. (credit: City Studios)

“When I saw it, I said to myself that this can’t stay in the Technion but it should be available for everyone,” he said.

He partnered with a high-tech company in northern Israel to develop the technology to print the entire Hebrew Bible – all 24 books on a chip the size of a small square of graph paper – just 5X5 mm.

Bentov also put the New Testament on a chip. The chip with the entire Bible then becomes the centerpiece of a piece of jewelry with design ranging from Jewish stars to infinity charms to leather bracelets with a Tree of Life design.

The Tree of Life pendant has two chips as part of the design – one Hebrew Bible and one New Testament.

“There are already imitations out there,” he said. “But we are the only one that is made entirely in Israel. All of the history is here, and it’s important to us that it be completely made in Israel.”

Bentov said that he and his children all wear one and that he believes it provides mystical protection. His daughter, he said, is an IDF soldier serving in the West Bank city of Hebron and that he has no doubt that the Jerusalem Nano Bible keeps her safe.