On Sept. 5, 1972, members of the Israeli Olympic team were taken hostage and killed at the athletes' village by the Black September group.

By REUTERS
SCOUTS GUARD torches above the names of the 11 Israeli athletes murdered at the 1972 Summer Olympics in Munich by terrorists from the Black September movement, at the memorial ceremony in Tel Aviv.
(photo credit: YA’ACOV SA’AR/GPO)
Advertisement

The families of Israeli athletes murdered at the 1972 Munich Olympics are unhappy with fresh German compensation offers and plan to boycott a ceremony marking the 50th anniversary of the attack in protest, their spokesperson told Reuters on Friday.

An official ceremony is planned for Sept. 5 in Munich.

"I don't want some euros to be thrown in my direction. We are not going to accept that," Ankie Spitzer, spokesperson for the families, told Reuters Television. The sums under discussion have not been disclosed.

"We are not going to the memorial ceremony until Germany takes real, responsibility, not only by words," added Spitzer, whose husband was killed in the attack.

A German government spokesperson said Berlin regretted the families' decision not to attend. 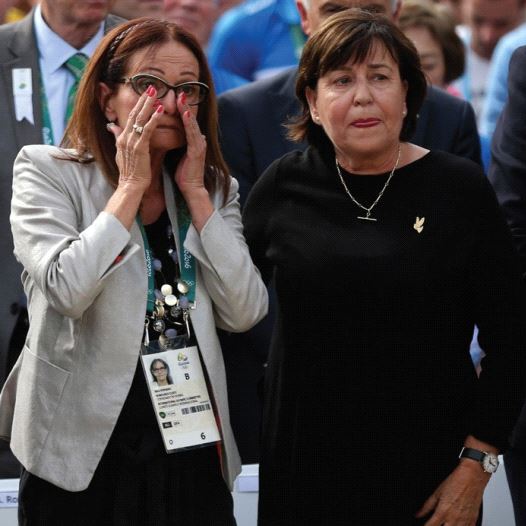 On Sept. 5, 1972, members of the Israeli Olympic team were taken hostage at the poorly secured athletes' village by Palestinian gunmen from the Black September group.

Within 24 hours, 11 Israelis, five Palestinians and a German policeman were dead after a standoff and subsequent rescue effort erupted into gunfire.

"After the murder of our loved ones, I was in the room and I will never forget standing there," Spitzer said.

"I was only 26 years old then, 50 years ago, and I looked around me and I saw the total chaos in that room ... blood all over the place".

"We want compensation, which is not a gesture," she added.

The government spokesperson said Berlin had decided to make further payments to the families in addition to compensation already paid. The government, he said, "regrets it has not yet been possible to reach a consensus on this basis with all the survivors and emphasizes its readiness for further talks."

The Times of Israel reported that immediately after the massacre, Germany made payments to the relatives of the victims amounting to about 4.19 million marks (about 2 million euros) and that in 2002, the surviving relatives received another 3 million euros.

Since the end of the Holocaust and World War Two, Berlin has felt a special responsibility towards Israel.