At about 3.40 a.m. a perpetrator threw tires over the fence, then climbed over, quickly moved the tires closer to the building, doused them with a flammable liquid and set them on fire 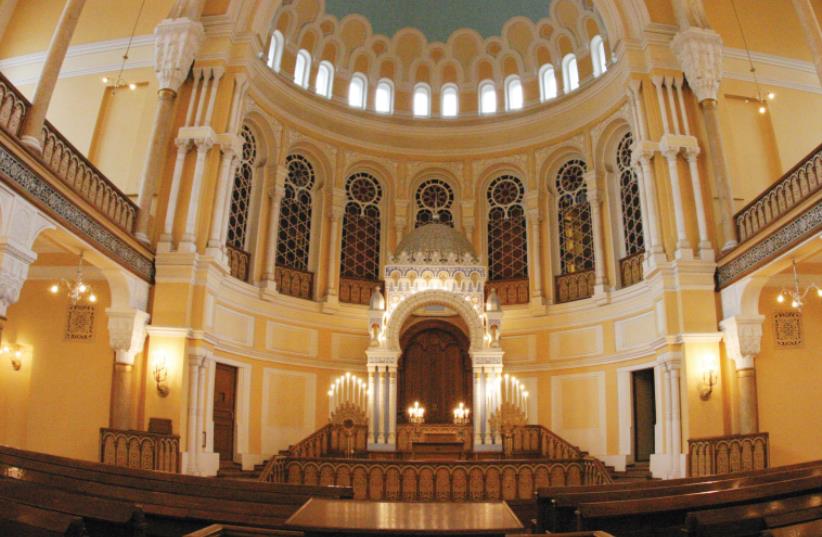 THE INTERIOR of the Grand Choral Synagogue of St. Petersburg, Russia, is seen.
(photo credit: GRAND CHORAL SYNAGOGUE)
Advertisement
A synagogue in northern Russia was severely damaged in a fire that the local Jewish community said was caused by arsonists.
The fire consumed the entrance hall of the Northern Star Jewish community center and synagogue in Arkhangelsk, the Russian Jewish Congress wrote. No one was hurt in the fire.
Anatoly Obermeister, who heads the Russian Jewish Congress’ Northern Region, said in a statement that the arson Sunday was the third assault on communal property since 2015, though the previous ones resulted in little damage.
At about 3.40 a.m. a perpetrator threw tires over the fence, then climbed over, quickly moved the tires closer to the building, doused them with a flammable liquid and set them on fire. Firefighters arrived 15 minutes later, when the facade was already blazing,” said the report, which was based on security camera footage".
The report did not say whether the perpetrator could be identified.
The building targeted in the attack was inaugurated in 2018. Boasting three stories and a synagogue with 500 seats, it took four years to construct and cost nearly $3 million raised from private donors.
Northern Star is Russia’s northernmost Jewish institution. Arkhangelsk is located approximately 750 miles north of Moscow at a latitude that is more than three degrees to the north of Anchorage, Alaska.
In April 2015, unidentified persons fired an air rifle on the building while it was under construction. They sprayed anti-Semitic graffiti on it. In 2016, a firebomb was hurled at the construction site.