'He saw beyond the illnesses into the souls of his patients' 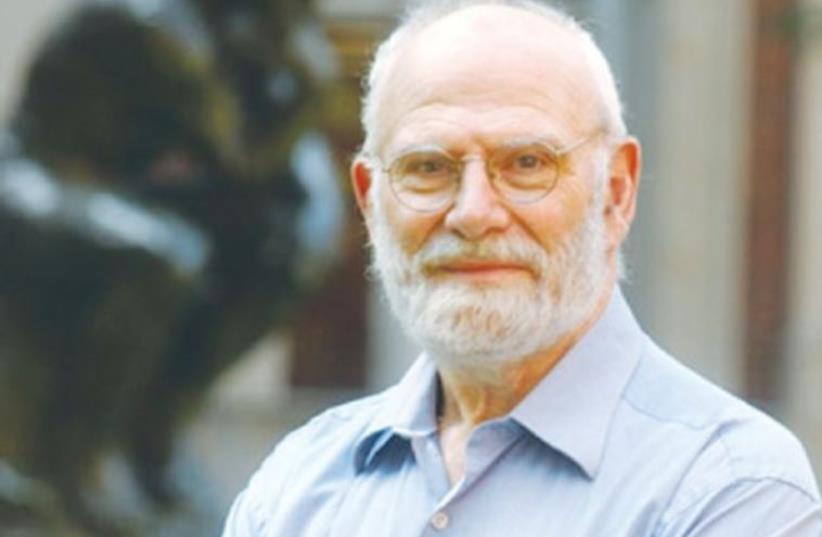 OLIVER SACKS
(photo credit: COLUMBIA UNIVERSITY)
Advertisement
Two weeks ago, in the last essay Oliver Sacks ever published entitled “Sabbath,” the late neurologist ruminated about his tenuous relationship with Judaism and how a serendipitous reunion with a long lost cousin brought the beauty of the day of rest back into his life.The cousin in question is Nobel Laureate and Hebrew University of Jerusalem Prof. Robert J. Aumann, who won the prize in economics in 2005 for his groundbreaking work in game theory analysis.The two became close, and Aumann, 85, visited with Sacks, 82, a week before he died.During a Sunday interview in his office at the Hebrew University’s Center for the Study of Rationality in Givat Ram, Aumann said he vividly recalled his first memory of Sacks, who he did not know was his cousin until the early 1990s.“My son Yonatan read one of his books, The Man Who Mistook His Wife for a Hat, and without knowing he was related to us, he recommended the book to me, and I read it and was very much taken by it,” he said. “Then it dawned on me that he might be related to us.”Aumann, who holds a visiting professorship at Stony Brook University – where he is one of the founding members of the university’s Center for Game Theory – said he looked Sacks up the next time he was in New York, more than 20 years ago.In short order, the luminaries determined that they were first cousins, once removed, on Aumann’s maternal side.“The fact that I didn’t know we were cousins may sound a little strange, but we have a huge family,” Aumann explained. “My maternal grandfather was the first of 18 children, and Oliver was the son of No. 16, so that’s a lot of people out there.”“When I went to see him, he was very cordial,” Aumann continued. “And we’ve had a very close relationship ever since.”Indeed, the two struck up a close friendship, visiting one another annually in New York, as well as in Israel during Sacks’s last visit to the country a year ago to celebrate another cousin’s 100th birthday.In “Sabbath,” Sacks described Aumann as “...a man of remarkable appearance with his robust, athletic build and long white beard that made him, even at 60, look like an ancient sage. He is a man of great intellectual power, but also of great human warmth and tenderness, and deep religious commitment.”He added of Aumann: “He insisted I have a mezuzah on my door, and brought me one from Israel. ‘I know you don’t believe,’ he said, ‘but you should have one anyhow.’ I didn’t argue.”Knowing that Sacks was nearing the end of his life, Aumann flew to New York last Sunday to visit the renowned physician and writer in his Greenwich Village apartment to say a last goodbye.“He asked me what my concept was of Haolam Haba [the afterlife], and we discussed that a little bit,” Aumann said. “He was preparing for death. He was very weak, but he was totally lucid.”“I think he had a longing for religion,” Aumann continued.Although Sacks was raised modern Orthodox by his physician parents in London, when his mother learned from his father that her teenaged son was gay, she called him “an abomination,” and said “I wish you had never been born.”The trauma of the encounter resulted in Sacks’s estrangement with Judaism.“That outburst really hurt him, and I think remained with him for the rest of his life,” said Aumann. “He even mentioned it in the last essay he wrote. Until his death, it made a tremendous impression on him.”“He wasn’t really religious before that, but of course, he could have been,” Aumann added. “I think it’s a little difficult to be religious and also a homosexual. He never discussed it with me.”Despite Sacks’s renunciation of religion, Aumann said his cousin still held a deep respect for Judaism.“I remember once we were sitting in a kosher restaurant in New York having dinner, and after the meal I benched [said the blessing after the meal], and when I was done he said, ‘Robert John, that was really rather fast. You must not race through it; I’m not even sure you said everything,’” he recalled.“So, he was aware of it, and that indicated that he hadn’t abandoned [Judaism] entirely. He still had a reminiscence of it, and I think some kind of longing. I think that maybe formed part of the attraction, part of the relationship between us.”If given the chance to eulogize Sacks, Aumann said he would note his cousin’s celebrated empathy and sensitivity.“He was very sensitive to people and he had an understanding of people, especially people with difficulties,” he said. “He saw beyond the illnesses – he saw into the souls of his patients. His main activity in life was being a physician and helping his patients.”Additionally, Aumann said, he would discuss Sack’s “tremendous knack for writing.”“He was a writer,” he said. “He was able to take these cases and to make them live in his books. That was his special ability. There were a lot of physicians around, lots of neurologists around, but none of them knew how to write like Oliver.”However, it was Sacks’s ability to connect with his patients on a profound level, and help them through their seemingly insurmountable struggles, that truly made his cousin great, Aumann concluded.“He related to them like human beings, not like cases,” he said.While Aumann said he was not comfortable revealing the details of their final conversation, he did discuss the powerful final sentence Sacks wrote in “Sabbath”:“I find my thoughts drifting to the Sabbath, the day of rest, the seventh day of the week and perhaps the seventh day of one’s life as well, when one can feel that one’s work is done, and one may, in good conscience, rest.”Asked if Sacks achieved his goal of finally resting “in good conscience,” Aumann was unequivocal.“Oh yeah, oh yeah,” he said. “He definitely did. He was a tremendously influential figure.”